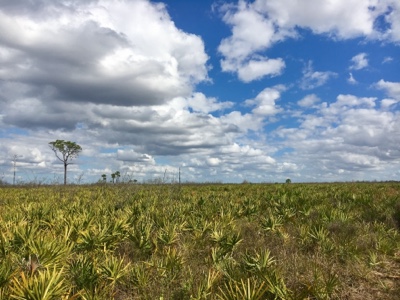 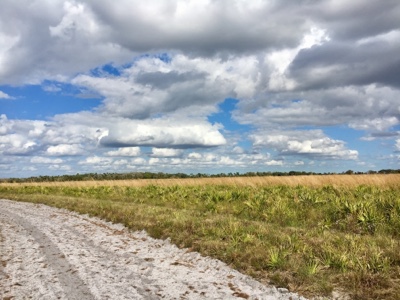 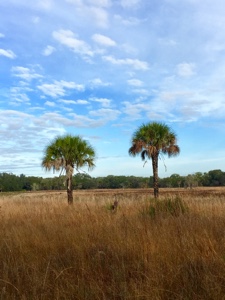 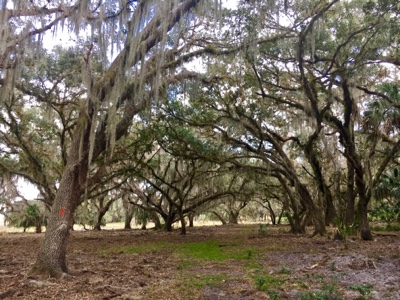 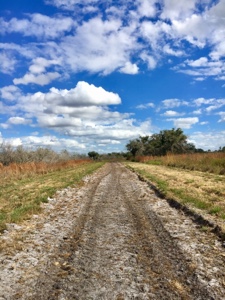 Today, my destination is Kissimmee Prairie Preserve State Park. To fuel my hike, I ate a big breakfast at my motel. Well, one of the employees saw me prepare a large waffle with lots of whipped cream. She said, “How are you going to work THAT off today?” I said I was hiking the Florida Trail. (So there!) 🙂

I picked up Moon Shadow at our usual 7:30 a.m., and we drove to Starvation Slough, where I’d ended yesterday. Duck was already gone, as I’d suspected. So I started off alone. The first two hours were wonderful. The air was still cool and the trail/scenery was gorgeous – lots of palmetto, trees with Spanish moss and burnished grasses. The ground was interesting. The soil was some kind of gray loam. In certain areas it was all torn up, as if a tractor or plow had gone through. But a few feet later, it would be covered with grass. Odd. It was a little hard to walk on, as it was so lumpy and bumpy.

Mid- to late morning the trail became singletrack and tucked alongside a barbed wire fence (private property). This was difficult because the fence was on the right and to the left was a drop-off to a canal below. The footing was still lumpy-bumpy and I was afraid I’d stumble into the fence. Or the canal; I saw an alligator splash in. Luckily, I was O.K., but the going was slow. Then, toward the end, the brush was very overgrown and there were some thorny plants in there that really attacked my lower legs. Luckily, I had compression socks on, but it still hurt.

From here the trail wound about 10 miles through the Kissimmee Prairie Preserve State Park. For the majority of the time you followed a wide, sandy service road. The views were pretty, although you typically had two or three miles of the same view before something changed. It was hard walking in the sand, too. But it definitely was nice to be on trails all day.

Oh – I’ve been meaning to note that there are lots of snails around. I saw a ton of shells by the barbed wire fence/canal today, but they’ve been along the trail since the start. I also saw my fifth turtle. And three raccoons scrambled up a tree as I went past. I thought they were nocturnal, and if you saw them during the day they were rabid or something. But here they seem to be out during the day.

Funny raccoon story from a few days ago: When Judy and I were packing up her car to leave the chickee at Billie Swamp Safari, an animal scampered near my feet when I was putting something in her trunk. I screamed, and it dropped something – Judy’s prescription sunglasses in their case! We looked around her car, and saw a ton of muddy pawprints in the back seat! We figured the raccoon was rooting around in there while we were in the chickee, grabbing our bags. And then it reached into her purse and pulled out those sunglasses. Ha!

Back to today. Moon Shadow met me at the park office, and we drove back to Okeechobee. Tonight I did laundry and made preparations for my last two days on the trail. For now, that is!