Arizona Trail Day 44: The End Is Near 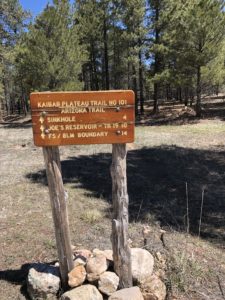 Had a great night’s sleep and joined everyone at 8, when the inn opened for breakfast. Everyone, that is, except Nat Geo, who got an early start on making up the 10 miles he and Cake missed yesterday when  they hitched into town.

This place is definitely understaffed; it took 90 minutes to make seven orders of pancakes and eggs. We had to keep asking for coffee, too. In the end, they missed one order — mine. Sigh.

I ate Upstream’s bread (she has Celiac) and she ate my hash browns. I also gave her some extra string cheese I had, plus alcohol wipes. Slow Squeeze said she’d stumbled upon four string cheese sticks I’d apparently dropped yesterday; she said the find made her day. Such is the hiking life.

I’ve been pretty lucky on this hike. Lost one toenail early on, then nothing until the awful heel blisters around the Mazatzal Wilderness. When those healed, the same toe that lost a nail began to hurt on the side. A lot.

It doesn’t look like much is wrong — kind of a blister/corn thing. Well, today it hurt so badly I feared I couldn’t make it. Did a little doctoring (won’t go into details for squeamish readers) and it was better. Phew!

From Jacob Lake, it’s a 2.4-mile road walk back to the trail, then 27 miles to the terminus. Given yesterday’s 50K and my toe, I hiked about a dozen miles and called it a day.

Another reason: Deena, the woman giving me a ride tomorrow from the terminus to Kanab, Utah, can’t get there until 5, so I’d prefer to have 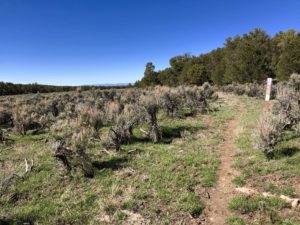 a full day of hiking so I am not waiting around for hours.

The first few hours, the trail was pretty rocky and passed through some burned and logged areas. Ugh. Then it went through some lovely pine forest.

I saw numerous perfect camping spots here, but I needed to log a few more miles. Of course, those last few miles took me out of the nice forest and into scrubby cattle grounds. The trail here is super hard to walk on, as it’s dirt hardened into awful lumps from cattle walking on the path when it was muddy.

Still, I found a flat patch in the scrub and I’m content. My last night on the trail and last night camping!