Arizona Trail Day 42: Out of the Canyon 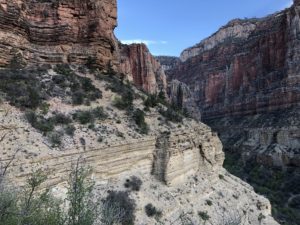 Today, heading out of the Grand Canyon, was another crazy one. This trail!

Last night, while I was in my tent, a man called out, asking if I needed water, as he had extra. It was my old friend Golden, who had decided to hike up to the North Rim and back, finishing his journey in Tusayan. He didn’t fancy walking on Hwy. 67, which hikers are doing now since the trail is under several feet of snow on the North Rim, and he proclaimed he had nothing to prove. I thanked him, but did not need water. It was nice to see him again.

Warm Night in the Canyon

This was my second warm night on the trail. I actually took my socks off and had the quilt pulled down. But I couldn’t sleep — ha! Guess I’m too used to the cold now.

I got up shortly after 5 a.m., and broke camp in an hour, a new record. I wanted to get the Rim hike over with because some guy mentioned yesterday that a section would be closed to fix some rock slides. Not sure if that’s true; I saw no signs. But I didn’t want to get caught.

The climb out from Cottonwood is about seven miles. The first three-ish were actually not bad, as it was a gentle climb on a nice, smooth path. With four miles left, that changed.

The trail got steeper, with lots of steps, which are harder because they require you to repeatedly lift your legs high, which is hard on the 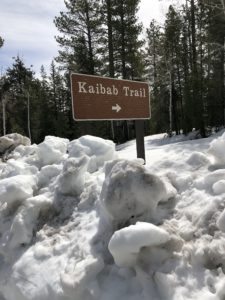 quads. The rock slide areas were precarious. And then I heard the chopper.

I was .6 miles from the end point of the area that was supposedly going to be closed at 10. It was 9 or so, so I really pushed hard. Which was difficult because of the steepness.

Cleared the area, passed through snowy patches (and fell twice), then finally popped out on the North Rim. Yes!

Then, I made a fatal error. Some guys I’d met earlier were up top, and told me my friends had headed left. I didn’t check my map, and did the same. An hour and two or three miles down the road, I realized I was going the wrong way. This could be a two-hour, five-mile mistake. So I prayed a car would come along and I could hitch back.

I’d seen two cars in the past hour, but within minutes a truck came down the road, headed in the direction I needed to go. I hailed it down and explained my plight.

The driver was a federal park employee and said he was not supposed to give rides. But he did. Yay! So just an hour lost.

I couldn’t figure out why hiking on the blacktop road was so hard. Then I turned around and realized I’d been climbing uphill a long time. Sigh. This went on seemingly forever.

When the road flattened out, the snow/slush began. The latest intel I had was that the entire 45 miles to Jacob Lake had been plowed. This is a month earlier than normal, but the snow was so deep they were worried they couldn’t get it done in time for the tourist season if they waited until mid-May. They are still working on the last few miles, so I plowed through a lot of slush.

I’d hoped to find a patch of dry ground to camp in amid the massive snow, much as I had done on Mt. Humphreys. But the ground on both sides of the road was very hilly and 99% snow. 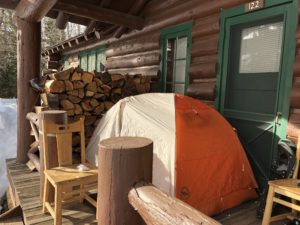 I opted to stop early, at 3:30 p.m., and camp on the porch of the North Rim ranger’s residence (now closed). Another hiker did this and also easily captured waster from the snow melting off the roof.

I was able to walk atop the massive drifts to the cabin without postholing, and now am ensconced in this lovely site. I even have two chairs on this porch!

There may be rain tomorrow, the plower told me. Likely a lot of wind. But he said it should be temporary. No rain or snow lasts all day here. I’m still about 35 miles from Jacob Lake. As I get closer tomorrow, the elevation drops, so I hope it will be easy to find a dry campsite.