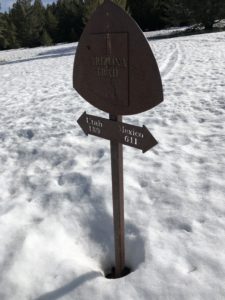 This is the hardest stretch of trail — Flagstaff to the South Rim — and I wish it was over because it’s full of trials! It’s hard because you can’t get off, so it’s five to six days of hiking and camping. Yuck on going so long without a shower, plus carrying food for that long is hard.

To make things more challenging, I had to conquer Mt. Humphreys. I did, but it wasn’t pretty.

Because it was warm the last few days, plus not freezing at night, the snow never crusted over as I’d hoped. This morning I hit the trail by 7 a.m., hoping to skate over the snow and get downhill before it started getting soft.

I had maybe 30 minutes of snow I could walk on (mostly spent finding the trail from my camping spot), and then I began sinking in with every step – the dreaded postholing.

It was all the more difficult because you couldn’t see the trail – there were footprints, faux footprints, sled marks, animal tracks, etc.  everywhere. I had to have my phone out and the app up almost all the time. Once my phone fell out of my pocket; thank goodness I noticed it right away and didn’t have to backtrack much.

I started out on top of the mountain, so initially the path was like walking on a field of snow. Soon it dipped into the woods and began to go downhill, but this was harder. The snow was softer here and I kept losing the trail and sinking in snow up to my knees. It was mentally and physically taxing. A horrible trial!

The trail then became switchbacks, and I realized I could navigate from the bottom of one to the bottom of the next to cut the distance I’d be postholing. From the looks of the prints I found, others had had the same idea.

After being near despair, I cut just three switchbacks and suddenly found myself on dirt trail! Hallelujah! Honestly, I’d been starting to wonder if I’d be stuck up there forever.

The path now rolled along a lovely flat, dirt track and then road. I made up a ton of time. It was great to hit the resupply box at Kelly Tank and 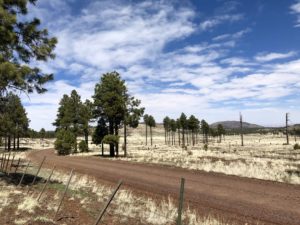 find all the water I needed, plus goodies and supplies, like candy bars and hand warmers.

But I’m not out of the woods yet (pun intended). It was super windy all day; I’m sure gusts were in the 40-50 mph range. And the forecast for Flagstaff called for an overnight low of 15!!

I found a little grove of bushes and set up my tent, secured with as many rocks as I could carry over. But it seems like it’ll blow over with me in it any second.

It felt warm all day, and at nearly 7 p.m. it isn’t cooling down much, unlike all the other nights. I’m praying I’m in a microclimate and it won’t get that cold tonight. But I do have that emergency bivvy.

Again according to the Flagstaff forecast, the next three days are supposed to be colder during the day (no problem) and in the teens at night. Gulp.

P.S. Last night I heard coyotes. I love that!