Arizona Trail Day 29: Over the Rim 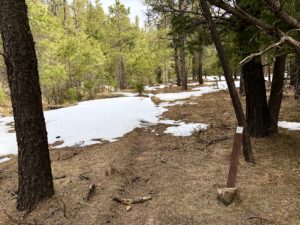 Today’s goal was getting up and over the rim. Ed and I broke camp before 8 a.m. and went our separate ways. He was headed back south to the car, which he would move up to the Hwy. 87 trail crossing. I headed up the rest of the Mogollon Rim.

Well, I went the wrong way almost immediately due to a sign for an equestrian detour that was also the AZT – so why didn’t the sign say that?! Lost 20 minutes. Grrr!

When I got back on track, the trail pitched sharply upwards some 1,000 feet to the top of the Mogollon Rim. It was hard going, but once on top the trail was awesome.

Easy Peasy Once Over the Rim

I’d read about all of the snow here on the rim and was concerned. Lucky me, the vast majority had melted. The first mile or so I did have to trek through patchy snow, and it was confusing in a few spots, but nothing too difficult. Then it was heaven for the rest of the day.

The trail here was mostly through pine forest – fragrant, soft and flat. I did have to cross a river/creek a few times and once waded up to my knees, but that was fine.

Ed hiked in to meet me and we met around 3 p.m. He brought me potato chips and a Coke Zero – what a guy!

We reached the Hwy. 87 crossing before 5 p.m. Normally I like to hike a little longer in the day, but we had the rental car near and there was a nice, piney place to camp, so we stopped.

As always, it’s cold tonight. Ed is surprised how cold it’s been, despite reading my trail journals. The next passage, Happy Jack, is rated as easy. Yay! Except with the recent snow and rain, it’s reportedly been super muddy and awful.

I hope the mud that had people in tears last week has dried significantly. I guess we’ll find out tomorrow!

P.S. Ed ran into CowStep today, so he’s still hiking. He should catch me tomorrow.