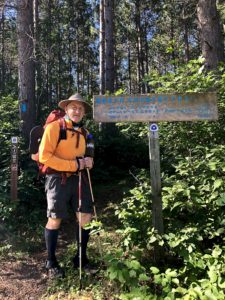 So last night we stayed at a lovely site nestled in a pine forest, about two miles shy of the Highland campsite and trailhead we’d been aiming for. Despite the pretty setting, I didn’t sleep well again. Perhaps it’s because the nights have been an odd mixture of stuffy, yet sometimes chilly. No biggie, though. We struck out around 8 a.m. for Solon Springs. Thankfully, the weather was cool and not buggy — yay!

When we hit the Highland trailhead, we segued off the trail to the Highland Town Hall for a bathroom stop and to get some potable water.

From here, the trail winds deep into the Brule River State Forest. We had lots of climbs and started crossing rivers and creeks. Before, most of the water was in lakes and ponds.

At one point, we enjoyed seeing a historic site: the Brule-St. Croix Portage, which is the route voyageurs and others took to get from the Great Lakes to the Mississippi. Around this site, we saw some rocks with metal plaques listing French names and dates. Were these spots where French voyageurs explored or died? There was no explanatory signage.

We reached the Brule bog boardwalk in the early afternoon. It was lovely at first. But then, heading toward the Catlin Creek campsite, Ed and I began crying out. We were under attack by wasps! Ed most likely disturbed a nest under the boardwalk we were on. 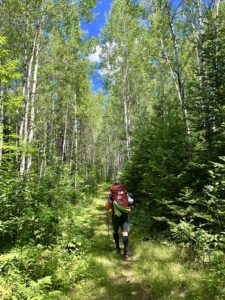 After flailing around a few minutes, we scurried off the boardwalk. Later, we inspected our wounds at the Catlin Creek campsite. Ed had three stings on his calves. I had seven stings: six on my calves and one on my arm. Never expected that!

The trail spit us out on a road route that wound south to the town of Solon Springs. We had three camping options: Stay in Lucius Woods County Park in Solon Springs, book a site at the private Swanson’s Campground or camp at the (free) Leo Creek campsite on the trail.

A ranger at Lucius Woods said he wasn’t sure if the (small) campground was full or not. He said we had to hike around the entire campground and see if there was an empty site, then hike back to the ranger station to claim it. That’s not a big deal if you have a car, but after hiking 14 or 15 miles, it didn’t appear so easy. 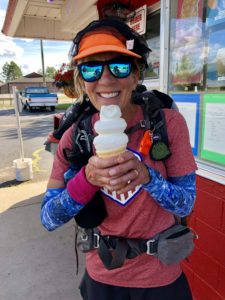 We opted to continue on to Swanson’s. En route, we saw Jimmy’s Ice Cream Shoppe and treated ourselves to a large soft-serve cone. We deserved it after those wasps! Once at Swanson’s, about .6 miles south of the ice cream stand, we learned to our dismay that not only was Swanson’s full, but it doesn’t have a campground for tents, just a park for seasonal RVs. That meant we had to hike on to Leo Creek, a few miles further. Rats.

We were dejectedly hiking toward Leo Creek, realizing we wouldn’t get to enjoy a shower tonight, nor a burger or beer in town, when Charlie from Swanson’s drove up in a golf cart. Long story short, Charlie and his wife try to help NCT hikers. He hadn’t realized we were on the trail when he sent us away. Now, he took us in his golf cart to a tiny, wooded spot near his campground’s bath house and said we could camp there, gratis. We thanked him, and insisted he take some money from us and donate it to the trail if he wouldn’t accept it. (That’s always a nice thing to do, since these awesome trails always can use monetary support.)

So now, I’m writing this in the Village Pump, where we’ve enjoyed burgers, onion rings and beer — yes! Oh, and SHOWERS at Swanson’s! Life is most excellent right now.