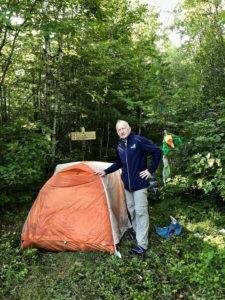 Camping at the Lake Ruth trailhead last night was O.K. No one bothered us, but we did hear traffic until maybe midnight, and then again starting around 5:30 a.m. I’m always surprised how much traffic is everywhere, even in remote locales such as this.

Ed and I headed out around 9 a.m. Thankfully, it was much less humid and buggy out. In fact, we enjoyed a nice breeze much of the day.

Our first stop for the day after departing from the Lake Ruth trailhead was at the Erick Lake campsite. It was gorgeous! There were beautiful lake views, easy access to the water, no bugs, a nice breeze, etc. So many times you find great campsites well before you’re ready to stop for the day. Oh, well!

Unfortunately, Ed got stung twice by bees this morning. We didn’t notice them buzzing around a downed birch tree until after they’d stung him. Not sure how I escaped unscathed, as I was the lead hiker.

Yesterday, the trail was pretty hilly. But today it flattened out in the morning, which was nice. We even scored some wild raspberries, although it’s the end of the season, so they were pretty small and picked over (by the bears!). In the afternoon, the terrain began rolling again. Sadly, many of the views were obscured by vegetation. Wish I could have seen them! Still, it was a pretty hike.

We had planned to camp today at the Paul Schoch campsite, named after an outdoors-loving local who, sadly, perished during an Alaskan adventure. The site was said to have clear water running out of a PVC pipe. Ed and I pictured a pipe sticking out of a rock high above us, so 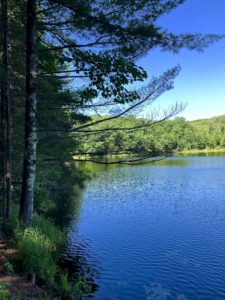 we could shower underneath.

Well, the campsite itself was reasonably nice. But the pipe was set low down in a swampy area, and the water was barely trickling out of it. The water was clear, so we grabbed some but decided to push on.

The only issue with that decision was that it was 5:10 p.m. and the next campsite was about seven miles away. We’d get there around 8 p.m., which is late. Could we find someplace else before then? We were hoping to score a spot at the one scenic view marked on the map, as the previous scenic views all had a flat spot and bench, perfect for one tent.

The trail switched from a lovely, easy path through pine forests to lumpy, bumpy prairie-type terrain. The lumps and bumps caused our feet to hurt. After two hours of clumping along in pain, and with another two miles to go to the campsite, I gave out mentally.

Luckily, just about the time I’d had enough, we found a bench set in some pine trees and with just enough space for our tent. Yes! 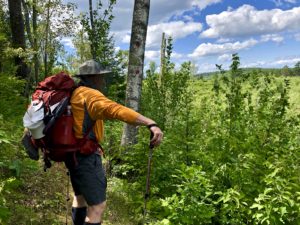 Dinner tonight was a new steam-in-a-bag deal where you just needed 3-5 ounces of water and 3-5 minutes of steaming. It was a chili macaroni thing that tasted wonderful. But it was only a small portion, so we supplemented with potatoes.

When Ed and I tucked in for the night, a whippoorwill began calling. It was pretty cool until the bird got closer. Then the call became very loud and annoying. Luckily, it flew away.

What will tomorrow bring?!