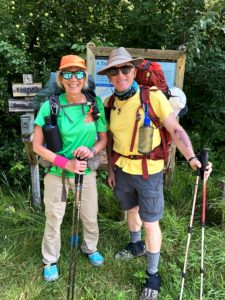 In 2018, we left off our NCT section-hike in Wisconsin near Drummond. So that’s where we started this year. We chose to hike in August because I had a book talk last night in Boulder Junction, which is relatively nearby.

The plan this year is to hike about 75 miles from Drummond to just west of Gordon Dam County Park. Peter Nordgren, a trail angel, met us at Gordon Dam this morning, where we dropped our car. He then shuttled us to the Drummond trailhead. And another adventure began!

The forecast was for a high of around 75 degrees with a 50 percent change of scattered thunderstorms around 1-ish. Not too bad, we thought. Well, we weren’t two minutes into our trek when the mosquitoes attacked with a vengeance. We were hoping they’d be gone by now or minimal, since we’d had no problems when we hiked on the Ice Age Trail a few weeks back. No such luck.

Between the relentless mosquito attacks and terrible humidity, we were miserable. We both also felt strangely lethargic from the start.

I did spot a black bear in the morning, which was fun (namely, because it ran away immediately). We also saw two cranes. And we found a lovely spot for lunch, lakeside, where there were no mosquitoes. But the minute we got back on the trail, they returned.

A thunderstorm did hit in the early afternoon, but it was short-lived and we had rain gear, so all was well. A second, minor, storm hit around 3 p.m.

Unfortunately, the rain only kept away the mosquitoes temporarily, and it stayed hot out.

This part of the NCT is in the Chequamegon National Forest, and there are very few official campsites. Dispersed camping is allowed, but there is so much undergrowth it’s impossible to put up a tent in the vast majority of the forest. We had hoped to camp on the shores of Lake 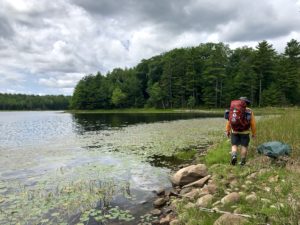 Ruth about two miles in from the trailhead, giving us an 18-mile day. But the lake was surrounded by scrub, so we could only bushwhack down there to grab some (yucky-looking) water. Then it was back on the trail.

We ended up hiking nearly 20 miles to the Lake Ruth trailhead, where we were able to pitch our tent right on the trail. Not ideal, but we had no choice. It was 8:15 p.m. when we arrived, since we hadn’t been able to start until 10:30 this morning, due to our long commute and then shuttle. Thus, we scrambled to pitch our tent, clean up, make dinner, etc.

It’s supposed to be a pleasant 50 degrees tonight, but right now at 10 p.m. it’s still warm and stuffy. Hopefully tomorrow will be a better day!