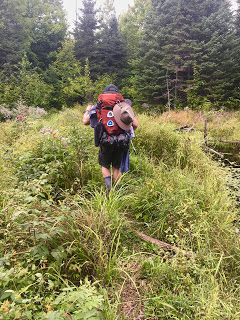 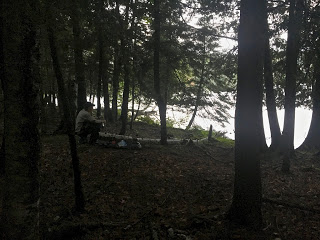 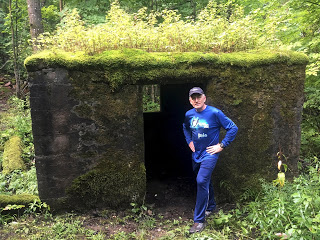 Today was beautiful! We got up and partially packed, then backtracked a little to check out the Swedish settlement. We saw the ruins of a barn, an intact springhouse and the spot where the root cellar had been. Interpretive plaques told about the family that lived there. It was interesting. What a hard life it must have been to settle this rocky land.

Back at the shelter, we packed up and bid Milkweed adieu. She was heading back east to her car. We were heading westward. After crossing Old Grade Road, we ran into a group of hikers. They were members of the Chequamegon chapter of the NCT! Marty Swank was even there, the former chair I’d been emailing before this trip. They told us we shouldn’t camp at Two Lakes campground as we had planned, but should instead hike a little further to the adjacent peninsula, where there was a campsite-in-development right on the lake with a bench and little beach. They gave us easy directions on how to find it, then bid us farewell.

The spot we were standing at was an overlook, so we hiked up. It offered fantastic views — maybe 180 degrees. Then it was back down and onward.

Our big challenge today were the mosquitoes. After all of that rain, they were out in force. But we enjoyed the day, especially crossing some beaver dams. But then, as so often happens, a snag. In this case, a big one.

We reached the Two Lakes campground. I was ready for a snack, but we opted to wait until we reached the campsite. For some reason I thought it was less than a mile away. In reality, the start of the peninsula itself was a mile or so away, and the volunteer pointed to the beach site as down the peninsula, across the bottom and at the start of the way back up — so maybe 2-3 miles away.

We were told the campsite was past an old area where power lines once passed, and that it was a driveway with carsonite NCT posts on either side. The road was big, because it once led to a resort. It was also flagged since the NCT was going to create a campground there, and there was a bench at the site. How could we miss with all of that info?

Our first surprise was hiking more than a mile and finding ourselves barely at the peninsula. It was clearly going to be farther than we thought. I again didn’t eat anything even though I was quite hungry because, well, we were almost there.

We found the area where the power lines had once been, but we never found a big road, much less one flagged and with carsonite posts on either side. We did spot a bench trailside, but it was on a cliff above the beach. Where was this place? And how could two people miss it if it was so easy to find? I have no clue, but we marched almost all the way up the other side of the peninsula before giving up and deciding we needed to find a spot in the woods and camp. It was already 7 p.m. and we were closing in on another 20-mile day. It was too late, and we’d gone too far, to try and re-hike everything looking for this spot — which we might never find anyway.

Thank goodness we only hiked back about 10 minutes when I saw a pine forest that abutted the lake. It was easy to clear a flat space for our tent, and it was easy to wash up. There was even a nice knoll facing the lake to sit and eat our dinner.

But I had been hangry for the last few hours, and so it had been stressful trying to find the beach site. I may have said some naughty words. The takeaway? Always eat/drink when you need to, even if you think camp is only a few minutes away. Because it may actually be 2 hours away!