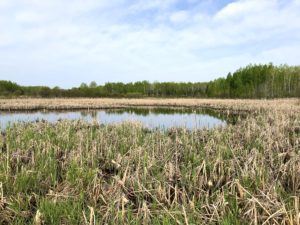 Today’s goal was an exciting one: start in the middle of the MacQuarrie Wetlands and reach the Wisconsin-Minnesota border! Two years ago, I’d stood at the spot as the start of my hike along the Superior Hiking Trail, on which the NCT piggybacks. Now, I’d be standing on the other side as I finished the Wisconsin portion of the NCT. (Well, except for about three miles [5 km] in the very eastern end that I still have to do.)

So, last night was great at camp. We had a nice dinner and the weather was great. It was cool overnight, but we had warm clothing and gear, so we were fine.

This morning we were up by 6 a.m. and were rolling out of camp two hours later. We weren’t in a hurry, as we didn’t have too many miles to hike. Plus, we had to re-jigger everything around in the car.

It’s interesting to compare the ways in which you can do a long-distance hike. There’s backpacking/camping like I did on the Arizona Trail, there’s car-camping as we’re doing here and there’s day-hiking, where you stay at motels.

Car-camping has a lot of plusses. For example, you can haul a lot of useful stuff, like comfy camp chairs and loads of food. But it seems like everything gets shoved here and there over the days and you can never find what you want. One great thing about backpacking is you only have a few things and you know exactly where they go.

But I digress. The day dawned sunny and warm, but not hot. We drove back to MacQuarrie Wetlands to hike the western wetlands, which quick segued into woods and then dumped us out onto a gravel road.

From MacQuarrie Wetlands to the Border 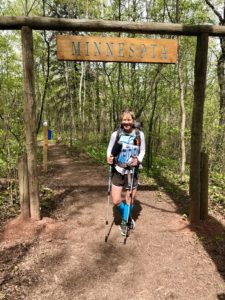 From there, I had about 1.5 miles (2.5 km) to the last bit of trail to the border. This final portion is about a quarter-mile (.5 km) alongside railroad tracks, which lead you to a trail that quickly unspools into the woods.

This trail was just built in 2019 and it’s lovely. It winds up, down and around. You cross several boardwalks and then … the border! The NCT’s Brule-St. Croix chapter created a cool archway with “WISCONSIN” carved on one side and “MINNESOTA” on the other. I wonder if I’ll find anything like this at other state lines?

Ed and I took the requisite photos, and I enjoyed the white trillium blooming.

As am Amazon Associate, I may earn a small commission from qualifying purchases. This doesn’t affect the price you pay.