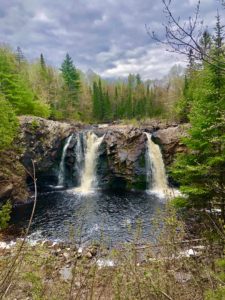 Today’s agenda called for hiking through both Pattison State Park and MacQuarrie Wetlands. Luckily, Ed and I both slept well. We were surprised how late the sun set last night (it was light until 9:15 at least). But it also seemed to be really light early in the morning.

We ate breakfast and decided to leave our tent set up. A few days earlier, the forecast was for a lot of rain today, so we had toyed with the idea of breaking camp and re-setting it up when we finished hiking. But today the forecast called for just two hours of possible showers. We were willing to risk it.

Striking Out for Pattison State Park

Per our usual NCT hiking system, Ed drove ahead a few miles, then walked back toward me. (I want to hike all of the NCT, but he doesn’t share that goal.) I had just under a mile (1 km) on Milchesky Road, a gravel road, then a few miles on Hwy. 35 before hitting Pattison State Park. It was cool and windy this morning. There were lots of gnats on Milchesky, but they went away when I got to Hwy. 35 – probably because it was much more open and I was walking into a headwind.

The morning was gray and chilly, and I had to add gloves to my shorts-and-t-shirt ensemble.

Ed met me at Pattison. I knew there was a section of trail closed due to 2018 flooding. It was supposed to be reopened in the spring/summer of 2020 – so now – but things got behind due to the coronavirus. So we went into the park and hiked a few yards to see Little Manitou Falls. The NCT was blocked off.

A ranger was driving by, so we asked the status of the NCT. He said the entire trail through the park was closed, and we should walk around the park on Hwy. 35. Rats.

We walked around the park to the north end. To make a long story short, we found where the NCT came through the park from the south. There was a small, orange construction net and a sign saying the trail was closed. But it looked pristine to us. No construction activity in sight. And other people were using the trail. I won’t say if we joined them or not.

On the north end of Pattison, the trail goes past Big Manitou Falls, the highest waterfall in Wisconsin. This trail was also closed, but a lot of people were hiking out to the falls anyway. I’m not proud of this, but we did, too. But I will say that the construction appears to be 99 percent finished. I didn’t see anything remotely dangerous.

I’d planned to stop the day at the end of the connecting road route, which is MacQuarrie Wetlands, about 18.5 miles (30 km). About .5 miles (1 km) before this spot, the bridge over a rushing creek was out. Ed thought it looked too dangerous to get across, as it meant going down a steep embankment, wading across the water, then going up another steep embankment. I wanted to assess for myself.

The embankment was not nearly as steep as Ed said. But the creek was wide where it looked calm. It had a narrower crossing 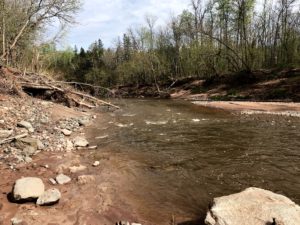 where it was flowing more swiftly, but it looked shallow. I decided to try crossing, with Ed watching. If I made it, he could drive around and meet me in the middle of the MacQuarrie segment.

There were two parts to the crossing. First, a short, shallow walk to a rocky section. Easily accomplished in seconds. Next, a longer crossing in deeper water. I made it halfway through with no problem. But then the water got deeper and was flowing more quickly. I did make it across, but it was a bit scary. Always know how to cross water safely before you do it!

We hate ticks (who doesn’t?!) and the MacQuarrie section had a lot of long grass, which ticks like. Ed drove to the parking spot mid-section and hiked in to meet me. My hike featured a lot of woods at first – beautiful stands of birch and other hardwoods. After I met Ed, we popped out into the wetlands section where there were beautiful stretches of water, marsh, etc. filled with ducks, red-winged blackbirds and even swans. It was so cool.

When we finished our day, we’d hiked about 23 miles (37 km), although some was repeat out-and-backs. Since we were in a non-buggy area (unlike our campsite), we decided to wash up here and pick off any ticks. That was a great decision.

Back at camp, we had a great dinner of mashed potatoes and a hearty salad, plus snacks like chips and cheese and beer. I have to say, we’re not fans of hiking at this time of the year because of the ticks and bugs. Still, today was beautiful. And as my hiking friend Beerman says, it’s all good.

We’re falling asleep tonight to the sound of frogs, birds, crickets and maybe even some coyotes (if we’re lucky). Life is good!

As am Amazon Associate, I may earn a small commission from qualifying purchases. This doesn’t affect the price you pay.