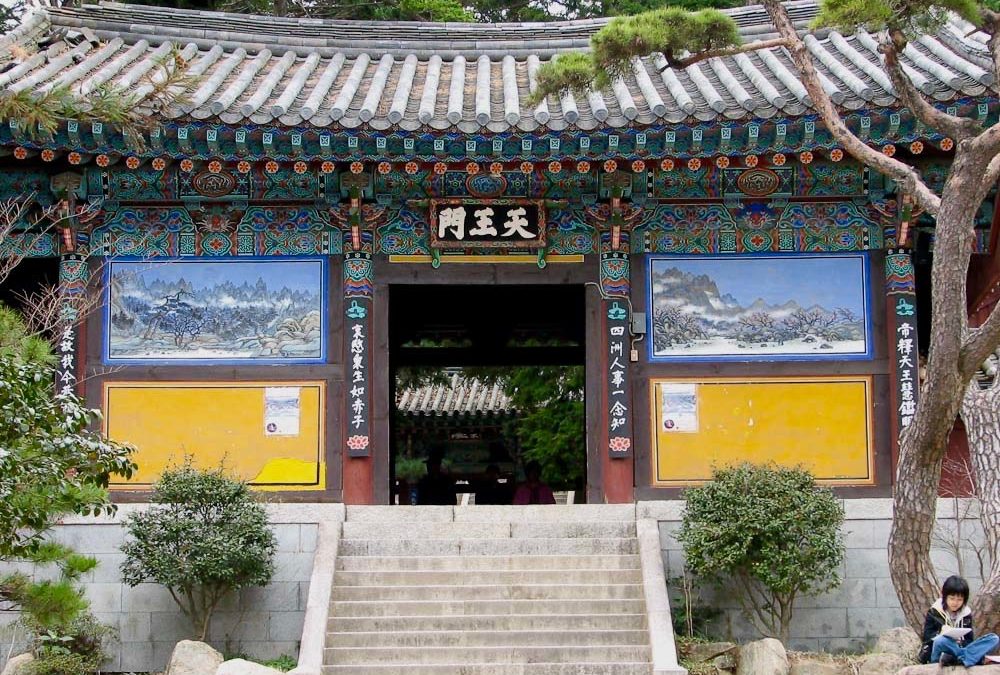 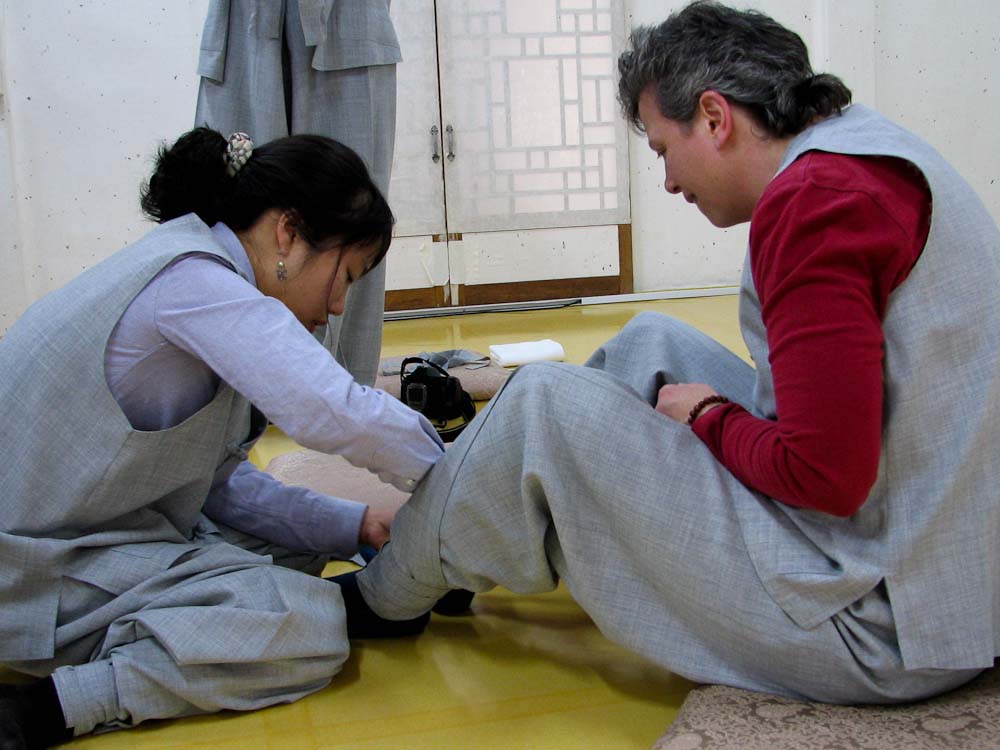 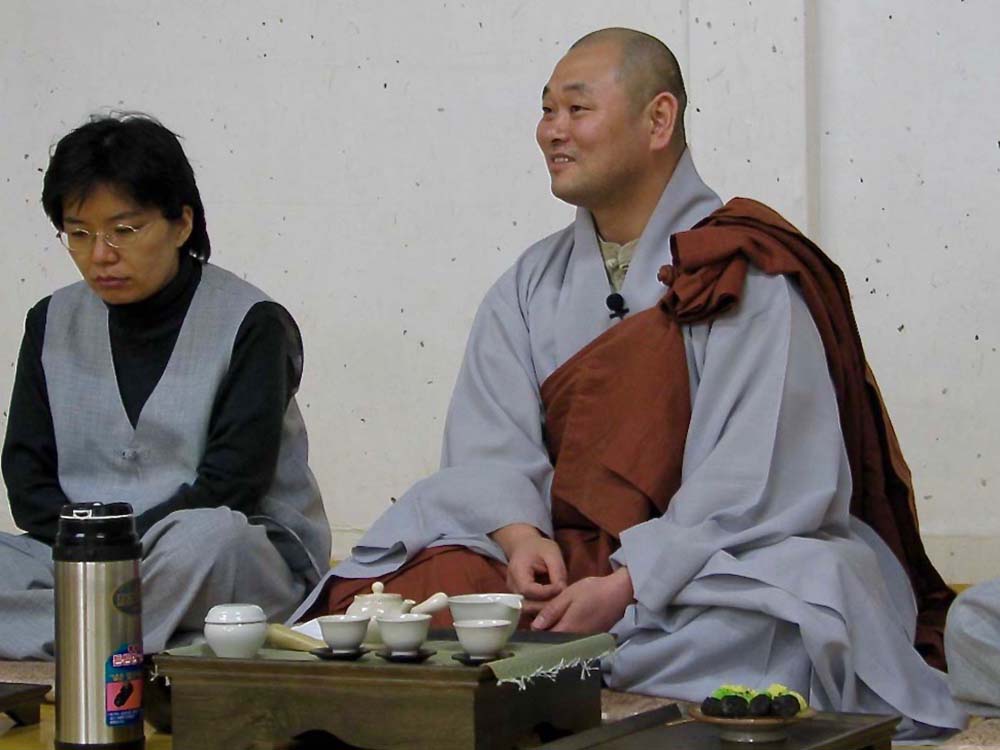 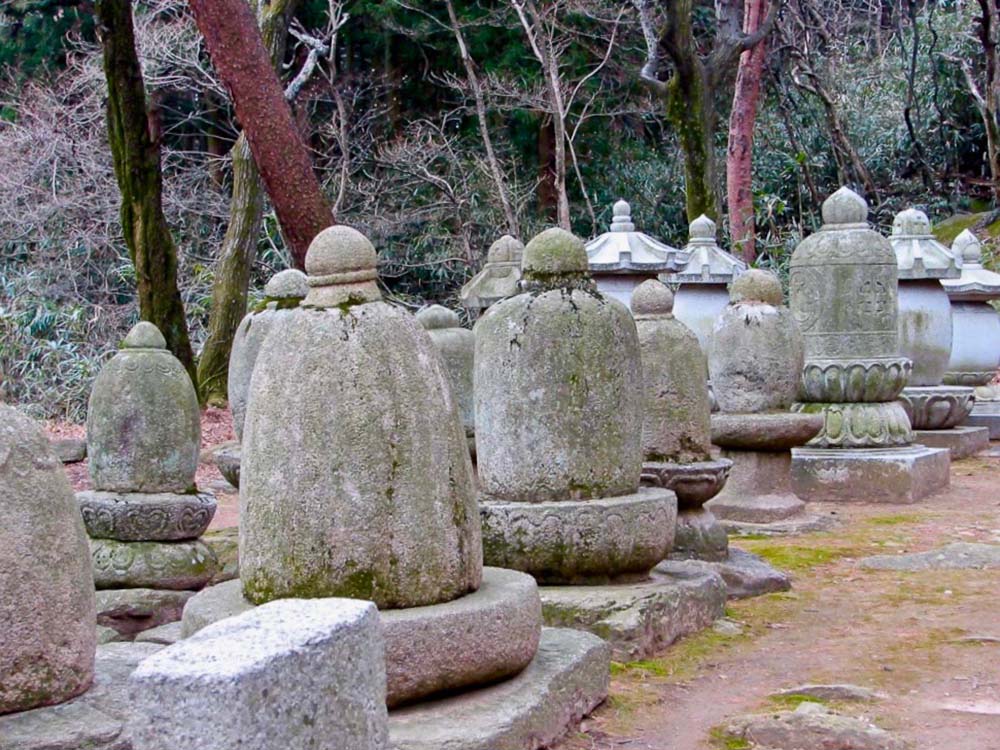 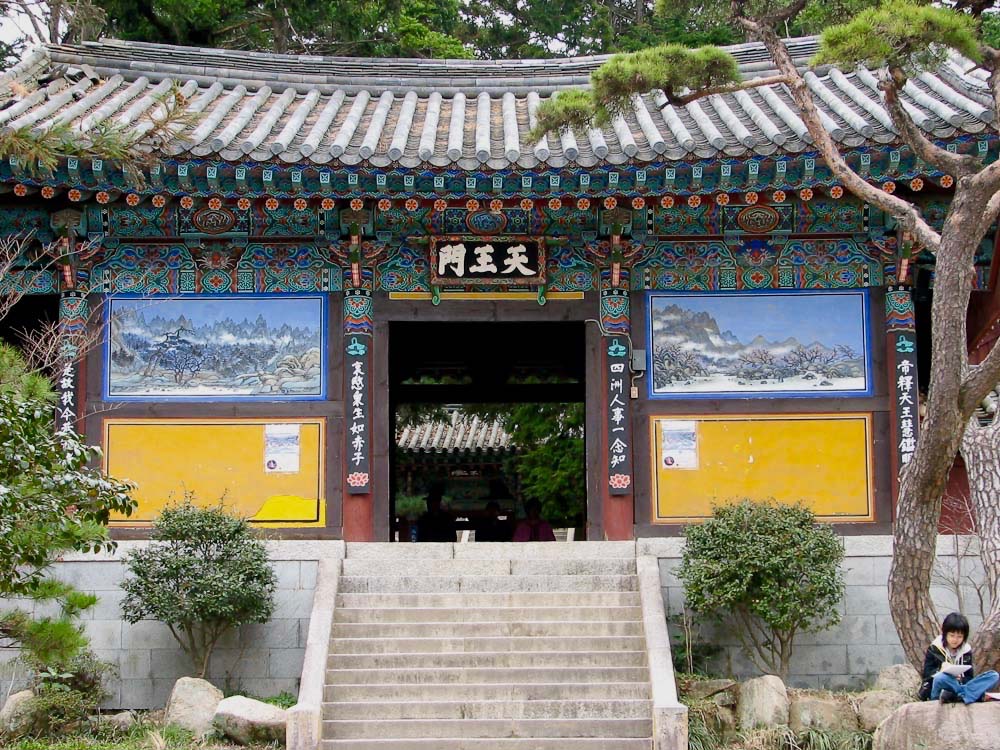 Clutching our square, padded floor mats, we file into one of Beomeosa Temple’s Buddha halls, then set down the mats in neat rows off to the side of the main chamber. Several dozen of the temple’s 150 monks will soon be entering the hall for their evening worship ceremony, and as guests we’re allowed to observe this ancient ritual. We’ve also been given some basic instructions on how to participate in the reverencing portion of the ceremony, which will require repeatedly kneeling, touching our foreheads to the mat while raising our palms skyward, then standing.

As I’m going over this reverencing sequence in my head – hoping I won’t forget the proper order – the monks quietly enter, their russet and gray robes softly swishing with each footstep. One of them rhythmically taps out a few beats on a hollowed-out gourd, and suddenly the room is filled with a deep, melodic buzz, the chanting of a prayer in Buddhist Sanskrit. Mesmerized by the tone, which seems to swirl around the room, fill my body, then float outside into the twilight, I almost forget to start kneeling.

The ceremony continues for 30 minutes. One of three each day, it commemorates Buddha and the lives of Buddhism’s practitioners. The kneeling becomes more difficult as my quads begin screaming in protest at this new and unusual workout, and I notice a few of my colleagues improvising less taxing versions. But the burning in my legs fades as the hauntingly beautiful chanting transports me far beyond the everyday world.

Beomeosa Temple has been tucked into the foot of Geumjeong Mountain outside Busan, South Korea, for more than 1,300 years. On every one of those days, at 6 p.m., monks have solemnly intoned the same soulful chant praising Buddha. The notes now seem to be part of the mountain, which absorbs each new recitation while releasing whispers of tones past, instilling in all privileged to hear them a message of hope, peace, and joy. With another tapping of the gourd the monks’ voices are stilled, and I snap out of my reverie.

Before 2002, it was unheard of for a non-believer like me to witness, let alone participate in, this slice of temple life. But that year the World Cup depleted South Korea’s supply of hotel rooms, so Buddhist temples opened their doors to stranded fans. Entranced by their unintentional peek into the world of Buddhism, guests raved about their sleepover, and the Korean Templestay Program was born.

Today about 50 Buddhist temples scattered across the country’s mountainous terrain allow visitors to temporarily sample Korean Buddhist culture, joining the communities to reflect or simply relax in the stunning surroundings (most of the temples are in national or provincial parks). While the majority of the country’s Templestay Programs are geared toward groups, with professional translators available, some allow individual guests.

My experience began earlier that afternoon, when my group arrived. We were immediately shown our bunkhouse, a long room with a heated floor; we’d be issued a mat, pillow, and blanket later. We were fitted with a gray, rough cotton “monk uniform” consisting of a vest and a pair of trousers big enough to fit the most super-sized American. Volunteers helped secure the ballooning pants, cinching them at our waist and ankles with matching ties.

I felt rather silly, as if I’d stumbled into a costume party, but my giggles stopped when the staff began instructing us in temple etiquette. We must walk around the grounds in silence, our backs straight, right hand clasped over the left and resting just below the belly button. We must bow in front of every Buddha hall. And we must never climb the middle set of stairs, which are reserved for Buddha himself. We had to remember that we weren’t here merely as observers but as members of the community.

After a lengthy tour in the fresh mountain air – including peeks into the grand shrine (home to the temple’s main Buddha image), at a 1,300-year-old stone lantern, and into a shrine sanctuary for the Goddess of Mercy – I couldn’t wait for dinner. But while we knelt on a pale brocade mat on the dining hall floor, Hye Su, the monk in charge of our stay, told us through an interpreter that eating is another form of spiritual practice. As such, a strict protocol is followed, which includes silently unwrapping the dinner bowls in a specific sequence, taking only 70 percent of the amount of food we thought would fill us – showing equality and solidarity with the world’s hungry – then eating every speck. Afterwards, we were to rinse our bowls with hot water, scrub them with a radish slice, then eat the radish. Nothing must be wasted.

As I glanced at the small portion of food in my bowls, I caught Hye Su’s eye. He smiled approvingly. Good – I hadn’t been a pig. But would these few spoonfuls of cold vegetables and a fistful of rice sustain me? I didn’t have time to contemplate that for it took all my concentration to avoid clanking my utensils as I ate.

The worship service followed, then it was time for this temple’s “special activity.” We would be making lotus lanterns, which, Hye Su explained, symbolize a wish to light the universe with wisdom and compassion and drive away the darkness of ignorance. After making the lanterns, they would be lit and we would parade around a stone pagoda. Grabbing some glue sticks, Hye Su showed us how to fashion a lantern out of a paper cup and brightly colored tissue paper. What would Buddha think, I wondered, if he could see 30 middle-aged Americans sprawled on the floor in one of his temples gluing tissue paper to Dixie cups?

He’d be pleased, I decided later as we silently followed Hye Su around the pagoda in the inky darkness. Our lopsided lanterns no longer seemed like childhood art projects. Instead, as they cast colorful soft blobs of light into the frosty night air, they evoked the same strong sense of hope, peace, and joy I’d felt during the worship ceremony.

The rest of our stay was a blur. There was a tea ceremony, which Hye Su used to answer our questions on Buddhism. A 3:30 a.m. worship ceremony, where several monks summoned all beings to the world of enlightenment by beating an intricate rhythm on unique percussion instruments. A meditation exercise. And a lesson on bul-mu-do, the Buddhist martial art originally practiced by the monks so they could ward off Japanese pirates who threatened the country’s East Coast.

As we readied for departure, some in the group began stuffing their mouths with treats they’d hidden in their bags, making up for 24 hours of sparse meals. But, somewhat surprisingly, I wasn’t famished. In fact, I still felt filled with that mystical feeling of continuity with worlds past and present. Before zipping my bag shut, I impulsively tucked away my purple lotus lantern, a bit singed from the previous night’s walk. I planned to take Hye Su’s advice and light it when I got home, then walk around my backyard in silence, for with silence comes wisdom. And, if nothing else, fond memories of my temple stay.