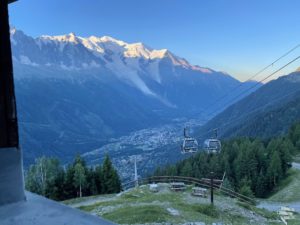 Oh, my – our last day’s hike back to Les Houches from Refuge La Flégère was not at all what we thought it would be! So, this guidebook that Bruce bought says our last stage should take about 6.5 hours, and that it features a lot of downhill. That turned out to be partly true. But let’s go back to the beginning …

We got up before 6 a.m. to have an early start to the day. We wanted to finish early so we could celebrate our accomplishment back in Les Houches. I was also worried because my right leg, with the tweaked calf, was super sore last night. I was limping throughout the hostel. Wasn’t sure how slow I’d go.

After a quick breakfast at the refugio, which included the most awesome warm croissants, we headed out. It was 7:30 a.m.

I told the Eckerts to head out and just plan to meet us at the hotel, intriguingly named Rocky Pop. Ed and I headed out from the refugio pretty slowly. The trail wound gently downhill, then crossed a jumble of rocks. We could see snow-capped Mont Blanc in the distance, and it was quite beautiful.

From there the trail began winding uphill. We knew there was some uphill in the morning, but we ended up climbing for HOURS. Not what we thought! We passed some chairlifts for those not wishing to hike up here, plus saw a lot of people parasailing. Their colorful chutes were fun to see.

Well, the trail just kept getting steeper. Finally, around 11 a.m., we reached Col du Brevent, which sits at 7,769 feet elevation (2,368 m). We thought this was it for the climbing. Nope.

At this point, the trail was a mass of rocks. There were rock-climbers everywhere; did we even belong here?! Then the trail was 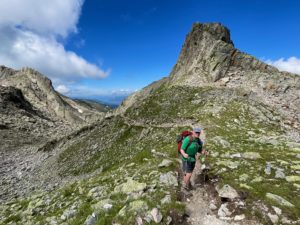 suddenly marked with yellow dots, and in places we had to scramble, using our hands and even butts. At one point there was another ladder, which made me angry (and scared).

Around lunchtime, we were on the top of another mountain, so we stopped to eat. Amazingly, Ed got a text from the Eckerts – they had stopped to eat lunch, too, and were up the trail, looking down on us. They’d taken a wrong turn and somehow we were now ahead of them.

After lunch in this beautiful setting, we started the downhill leg. Oh, my goodness!

Going downhill for hours takes a toll. But especially this downhill, which featured many sketchy spots with loose shale, metal “step” assists, chains and more. It was taking us FOREVER to pick our way down the hill. Eventually, the four of us met up again, only to separate another hour or two later.

An hour or so before we finished, Ed and I somehow got off on an official alternate route. We’d hoped to hike the entire original 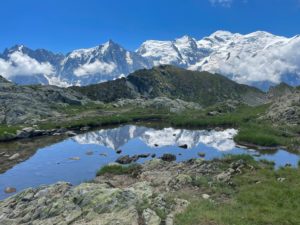 route, but we weren’t going to backtrack after all of the day’s travails. So onward we hiked.

We ended up meeting the Eckerts with a few miles to go. We were all hot, grumpy and sore. But Amy spotted Hotel du Bois, our starting point, and that cheered us up. We took a finale picture there. Rocky Pop

Rocky Pop is a strange (but very nice) place. The rooms are newer, comfy and modern. But the hallways and elevators are black with sparkles – just odd, and kind of disconcerting. The half-board dinner was not prix-fixe, per usual, but a selection of items, all of which were good.

So … we did it! It was quite challenging, and my advice to others is to never hike more than about 10 miles (16.1 km) per day. It would also help to have one rest day in the middle. But I do not regret this hike one bit. We all agreed we’ve seen the most incredible landscapes in the world.

Today’s most useful gear: Love my new Keen Nxis trail shoes. I have a lot of foot issues (bunions, arthritic big toe, etc.), but these shoes work with all of that!