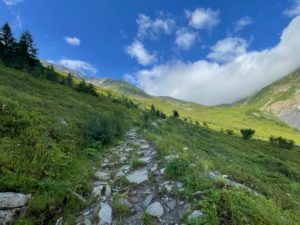 Today’s trek to Le Flégère was pretty awful. And yet amazing. Such is the TMB! We got up pretty early in our refugio, as we wanted plenty of time for our hike. While we’ve had decent breakfasts at most places, this one was pretty skimpy, namely in that it lacked protein. Lots of breads and coffee, but little or no yogurt, meat, cheese, etc. We struck out by 7:40 a.m., which was perhaps our earliest start.

Of course the day began with a long uphill; most of them have. My right leg, which had a calf tear from January that has never fully healed, bothered me almost immediately. So Ed and I separated from the Eckerts so we could all hike at our own pace.

We made it up to the Col de Balme before noon, then began our descent. En route, we passed the Maltan guys we’d seen yesterday. It seemed days earlier. Anyway, they were going in the opposite direction. Strange. I stopped them to say something was wrong; we should both be heading in the same direction. They were sure they were headed in the correct direction, and continued 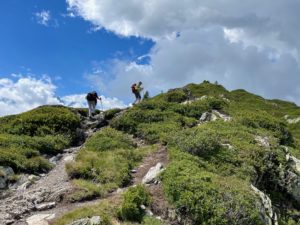 on. About 20 minutes later they jogged past us, saying they had made a mistake and we were right.

We’d assumed we were heading down for the day. We were wrong. So, Bruce Eckert purchased the TMB guidebook; we did not, which was a mistake. We didn’t realize the day’s hike had you go down a saddle and back up again. So shortly after passing the Maltan men, we began climbing. We also ran into the Eckerts again. We climbed and climbed and climbed. Luckily, the scenery was amazing, as always, so that made up for it.

After hitting the second high point, the real descent began. This was difficult. It was long and my leg hurt. Eventually, around 3 p.m., we arrived at the road … only to face another huge climb. Sigh.

At this point, the signage said we had another 3 hours until our refugio. We two couples had gotten separated again. Ed and I forged ahead. This section featured a multitude of ladders, according to the guidebook. But you could skip them by hiking an extra half-mile (1 km) or so. I wanted to do that, as I’m afraid of heights. And I really didn’t care for the idea of climbing ladders attached to rock faces with a weak leg and backpack. 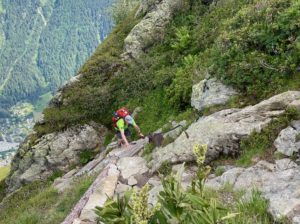 Well, somehow we didn’t find the detour. So after hiking an hour or so, we arrived at the ladders. There was nothing to do but climb them. I started to cry, right in front of a family with a girl about 8 years old, who had all successfully navigated them downwards, with nary a fear.

I hyperventilated while climbing the first few, then just got angry and handled the rest, which consisted of a combination of ladders, railings, metal footholds and wooden steps. After the horrifying ladder area, we began our final descent.

Here, the terrain wasn’t too challenging. Best of all, we saw ibex (moms and babies), which was enchanting. 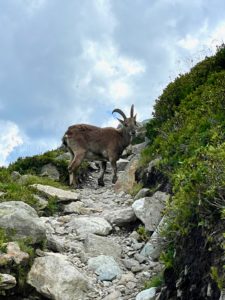 We ended the day, per usual, late at the refugio. We had just enough time to shower before the group dinner. The Eckerts got there just in time for dinner. Dinner was a raclette with salad, then chocolate mousse or apple tart for dessert. Our lodging consisted of bunk beds in a huge dormitory.

My leg, which had hurt during the day but had been manageable, was super painful tonight. I was limping, and feared I wouldn’t be able to finish tomorrow. During dinner, a fellow hiker appeared to have a heart attack and had to be evacuated via helicopter. That made me stop feeling sorry for myself.

Today’s favorite gear: The Stick, which I carry with me on all of my hikes to massage my sore muscles.