Today’s hike from Refuge des Mottets to Cabane du Combal was short, at about 7 miles (11.3 km). So we didn’t want to start out too early. But we had to be out of our rooms by 8 a.m., so we hung out in the dining hall and/or outside while we tried to dry the clothes we’d washed last night that were still wet.

While hanging out outside, we met a group of Finnish runners who were doing the entire TMB in four days. Can’t imagine that! They were hiking the uphills and running all of the downhills, and had stopped here for a snack.

By 9:45 a bunch of our clothes had dried, so we set out. Well, I first checked out a monument behind the refugio. It’s a boulder with plaques and the Italian, French and American flags. It marks a spot where, in 1946, a plane carrying some U.S. Army Air Force members crashed into the mountains. It took a while for the bodies to be found, and for years part of the plane was stuck in the mountains. So much history in the world.

Anyway, from Refuge des Mottets, the path goes steeply uphill to the border with Italy. It was another hard hike, especially after 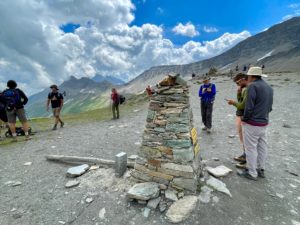 yesterday. Everyone was slogging along. And like yesterday, the weather on top of this peak was gray, cold and windy. We snapped a bunch of photos, then continued on.

From there, the path was largely downhill. We passed a building that was once an Italian border checkpoint (around the WWII era), now restored to explain how a European tectonic plate slid under an African tectonic plate to create these mountains – and we could see the difference in the rocks on one side versus the other. Pretty cool.

Near Refugio Elizabetta, there were some old brick buildings that had been used by the Italian military in the past. It was interesting. Shortly after that, the trail finally reached level ground near some impressive waterfalls and rushing streams, all from glacial melt. This glacial meltwater is an amazing aqua color. 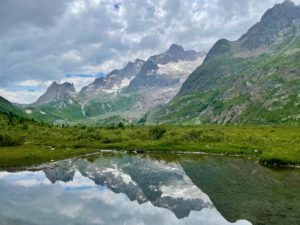 Our lodging tonight is Cabane du Combal, another refugio. The four of us are in a large room with four twin beds and a bathroom. We’d arrived early (for us) – about 3 p.m. Check-in wasn’t for another hour, and it began to rain. Luckily they let us sit in the dining area until check-in opened. Looking forward to our Italian meal tonight, which is supposed to be some kind of salad, then sausages and mashed potatoes, then dessert. Doesn’t sound too Italian, but we’re hiking very close to several countries, so it’s all mixed.

Today’s best hiking gear: I love my new REI Swiftland gaiters. They have two heavy strings that go under your shoe (versus rubber strips), which seem to be sturdier. They also come with one set of replacement straps. My husband, Ed, LOVES his new Merrell Moab 3 hiking boots. He’s had lots of trouble finding good hiking boots in the past, and says these are the best he’s found.