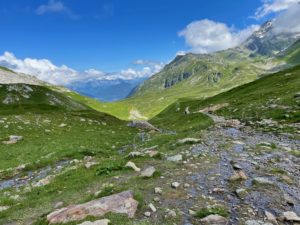 We knew today was going to be a tough one, because we were hiking some 18 miles (29 km) from Les Contamines to Refuge des Mottets. And not just any 18 miles, but some super steep miles, both uphill and downhill.

After a great breakfast at Le Cristiania (croissants and pain du chocolat!), we hit the trail. It was shortly before 8 a.m. The first few miles were flat, and passed what appeared to be either an Olympic training area or a place to practice many different sports. And then the climbing began. Oh, my.

The first stretch was a steep uphill on some slick rock. It was tough. Eventually, the terrain leveled off. Luckily, there were diversions here and there, such as waterfalls and a natural bridge. They gave us good excuses to stop climbing. This section was largely wooded.

There were even more people out today than yesterday. We were never out there alone.

After the forested area, the terrain opened up and we began inching our way up to the Col du Bonhomme, a mountain pass at 7,641 feet (2,329 m). It was so difficult! Thank goodness the scenery was breathtaking and there were fun highlights, like spotting cows in the field with those giant Swiss cow bells and crossing a small snow field.

But during this trek, all of us, including the hikers around us, were huffing and puffing to reach Col du Bonhomme, especially near 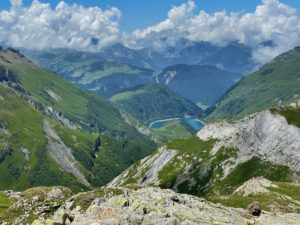 the end. All of our collective muscles were shot. At one point we considered stopping for lunch, and we should have, as our bodies needed the fuel.

But the peak appeared tantalizingly close, so we pushed on. We may also have been encouraged by the fact that there’s a giant cairn around the snowfield; add a rock, and it’s supposed to bring you luck to reach the summit. We each added a rock! In retrospect, though, pushing on was a mistake. It took us much longer to get there than we’d anticipated, partly because the incline was so steep, and partly because we were exhausted and needed fuel. We won’t make that mistake next time.

Anyway, we did get there and stopped for lunch and a much-needed rest. There were probably at least 50 of us up on top, eating and laughing and rejoicing that we’d made it. At some point, though, we had to push on. Not only did we have more miles to hike, but we were getting cold. Our clothes were drenched with sweat, and it was cold and windy at this elevation. So as soon as we finished our lunch, we continued on.

Downhill Is Hard, Too

We anticipated hiking downhill right away, but we had at least an hour or more of hiking uphill and/or scrambling on rocks before the trail descended. And then it descended steeply, which hurt as much as the uphill. At least we weren’t out of breath, though.

Finally, finally, we reached Le Champieux, where most hikers stay the night. We’d tried to obtain lodging here, but they were full for months beforehand. So we had lodging at Refuge des Mottets, several more miles down the road. We were hopeful it would be a gentle few hours of hiking. 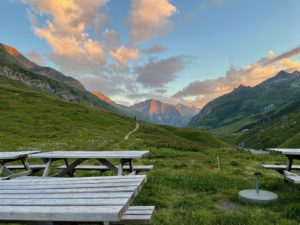 The trek out of town began on an asphalt road. It was a steep climb, but being on asphalt (versus rocks and such) it wasn’t too bad. Then the trail went off-road for a lovely mile or two. The trail was flat and the scenery was amazing – lots of wildflowers and cool rocky formations. But that wasn’t to last.

Soon the trail begin climbing again, and quite steeply in some portions. We had at least another hour to go to reach the refuge, and we were depleted in body and spirit. But somehow we hung in there, even while crossing another slippery snowy patch.

Some time after 6 p.m. we finally arrived at Refuge des Mottets – probably the last group of people. Everyone was already drinking beer and had washed their clothes and hung them out to dry. We quickly checked in and washed our clothes, also hanging them out to dry. Dinner had already started.

At this refugio, you have to have dinner at the same time, as it’s served family style. Amy and Bruce got to the dining hall before us and secured our seats. Staff brought out a hearty soup, cheese and bread. We assumed this was the meal, as we didn’t smell meat cooking or French fries or anything else. So we ate heartily. But then they brought out salad – which sometimes the French eat just before dessert – and then beef and rice. Yikes! That’s a lot of food. And there was also crème brûlée for dessert. We ate it all, though, as we were calorie deprived today.

While everyone was finishing dessert, one of the employees wheeled out this cart that played player-piano music on cards via a hand crank. It was so unexpected and amusing. The first song was the Champs Élysée, then two Beatles tunes, then Hallelujah. The crowd loved it.

We have the fanciest rooms here – small rooms that include a shower and toilet. Everyone else has either hostel (group) lodging or single rooms with a shared bath. We have these fancy rooms, as that was all that was left when we booked. But we’re glad to have our privacy and a small level of comfort.

This was a hard day, made bearable by incredible scenery.