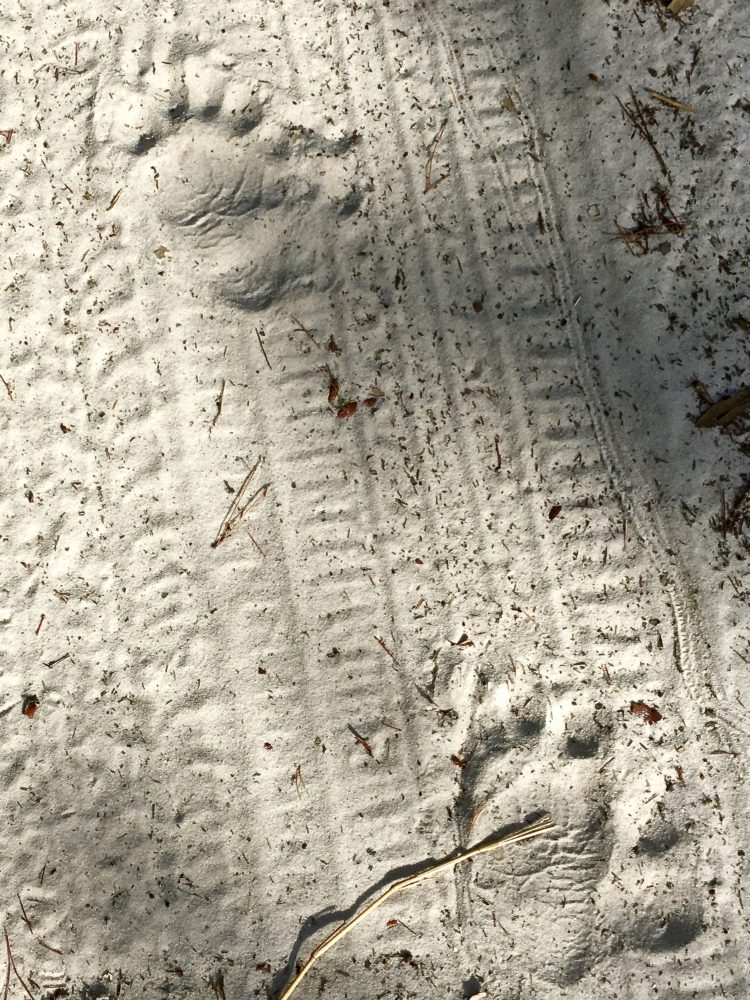 I never contemplated wildlife or insects such as ticks when I decided to run the Ice Age Trail. Pretty stupid, I know. I mean, I’ll be moving through lots of woods and wetlands, so obviously I’ll be encountering … things.

On the Camino in Spain, I actually rarely saw wildlife. I did walk through a lot of sheep pastures (not scary), through some Iberian pig pastures (a little scary) and through cattle pastures (pretty scary). There were lots of barking dogs that could be unnerving, and twice I encountered some aggressive dogs who I was sure were going to take a piece of me home with them. (Thankfully, they didn’t). But really, there wasn’t any wildlife to speak of. So it just wasn’t on my mind with the Ice Age Trail. Until I attended the annual conference in Dresser this past April.

During the conference, two men who had thru-hiked the IAT last year mentioned spotting black bears. Gulp. Living in the southern part of Wisconsin, I never realized we had bears ambling around our northern forests. They assured me that black bears like to leave humans alone, and there was no reason to worry. I calmed myself down, figuring I could handle a bear or two, but then they got on the subject of ticks.

One guy said during certain portions of his hike, he wiped hundreds (that’s right, HUNDREDS) of ticks off each arm, only to find them covered again a mere five minutes later. So he just walked all day covered in ticks, then cleaned himself off at the end of the day.

I stopped listening at that point. I felt sick. All I could think was, “Well, I’ll just have to cancel my run. I’ll call the editors and cancel my story assignments.” A few black bears I could handle. Weeks alone in the woods and on lonely roads I could handle. But hundreds and hundreds of ticks all over me? No way.

Luckily, I snapped back to attention just in time to hear the guys say tick season is roughly April-June, with ticks starting to decline in July, and then dying out completely starting in fall. Phew! I’d inadvertently picked just the right time to tackle the trail. My plans were back on.

So if, like me, you can’t stand the thought of hiking covered in ticks, now you know fall and winter are the seasons to tackle the trail. Or if a spring or summer hike is for you, please use anti-tick sprays such as hiker-faves Picaridin or Permethrin.