The Rewards of Climbing Israel’s Masada 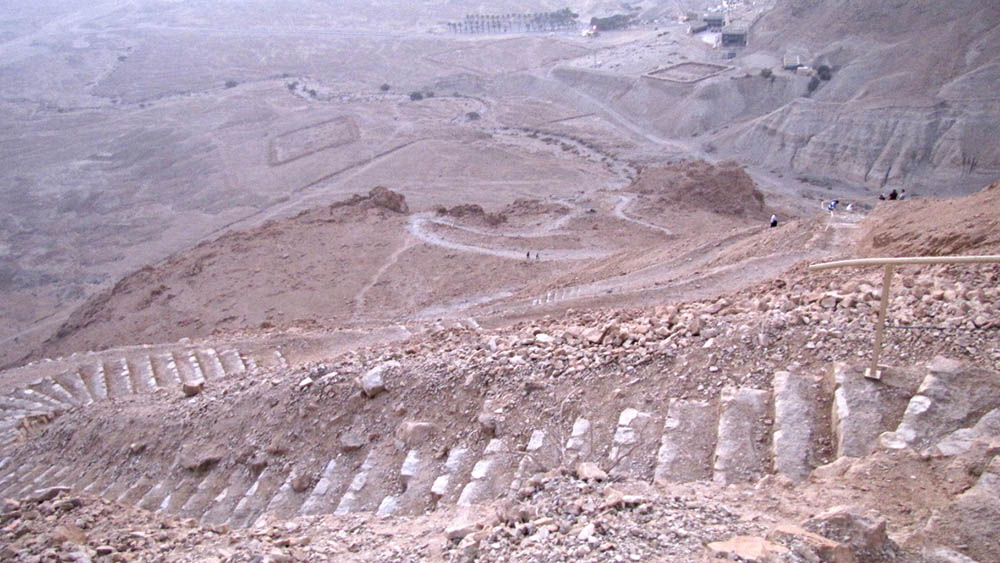 The air above Masada still holds the night’s chill, although the inky sky is beginning to show just the faintest hint of light. Throngs of students laugh and joke and generally clog the ramp leading to its top, an arid rock plateau south of Jerusalem that overlooks the Dead Sea. Impatient, I slither and slip in between the teens, trying to ascend as quickly as I can.

I need to reach the top so I can jog down the much steeper Snake Path on the mountain’s opposing side. Then turn right around and walk back up it.

It’s long been my dream to climb Masada’s popular Snake Path. My tour group was supposed to do so this morning, but our guide changed plans at the last minute and is leading us up the easy ramp path instead. When I protested, he gave me 30 minutes to run down and back up the path while the rest of the group is taking photos of the sunrise.

Masada is a UNESCO World Heritage Site and national park. As an Israeli tourist destination, it’s second in popularity only to Jerusalem.

Masada’s storied past was recorded by one Josephus Flavius. Although some of the facts are disputed, its main points appear to be verified by excavations. The story goes like this. Herod, a Roman king of Judea, created Masada in 37-31 B.C. as a winter palace and refuge in case the Jews revolted. In 66 A.D., they did.

After the Jews took control of Masada, they settled there. But their victory was short lived. The Romans laid siege to Masada in 72-73 A.D., constructing an assault ramp path — the one I’m climbing — so they could reach the fortress walls, which they smashed in with a battering ram.

But when the walls fell, a big surprise awaited them: all 960 of the resident Jews were dead. The verdict? A mass suicide.

The Jews knew they were greatly outnumbered, and if they remained to fight they’d all be killed or enslaved. “And they knew the Romans were very cruel to their slaves,” our guide explains. Before their suicide, the Jews burned everything they owned except their food. “They wanted to say, ‘I wasn’t starving during your siege. I was doing just fine. But I will never let you conquer me.’ It’s a timeless story.”

I make it to the top, take a quick glance around, then start jogging down the Snake Path on the plateau’s other side. Small knots of people are huffing and puffing their way up the steep slope.

Even though I’m heading down, it’s still rather difficult. The path is rocky and narrow, and twists and turn unrelentingly. Finally, I’m at the bottom. Now I have to go back up.

A sign warns I’ve got 700 steps ahead of me that will cover a little more than a mile, and that I’ll be gaining 1,148 feet in altitude.

There’s also an encouraging note from Flavius about the Snake Path: ” … he that would walk along it must first go on one leg, and then on the other; there is also nothing but destruction in case your feet slip, for on each side there is a vastly deep chasm and precipice, sufficient to quell the courage of everybody by the terror it infuses into the mind.”

Like those I passed, I’m soon huffing and puffing, willing myself up Masada’s flank. I get it; this was intended to be a difficult climb to discourage attackers.

At last I’m atop the plateau once again, only this time I’m covered in sweat. Everyone is oohing and aahing over the sunrise. I gaze across the vast desert and desolate scrubland, bathed in a stunning coat of gold by the rising sun. My muscles are screaming in protest at their recent mistreatment, but I don’t regret racing up and down this ancient plateau. If anything, my mad scramble made me worthy to stand here.

The Golan Heights are less than an hour from Masada, and are one of Israel’s main wine regions. A colleague visited and wrote this report