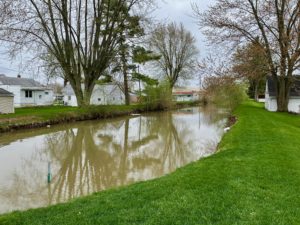 My hike today to Lock 14 was pretty enjoyable, despite some not-so-optimal weather. I drove to Delphos Stadium around 9:30, then headed out. It was gray and cool – about 38 F (3.3 C) – and windy. Luckily, the wind was at my right shoulder.

The path through Delphos is interesting. You essentially walk on a grassy strip in between the canal and private homes. In one spot, someone had been chopping up lots of blow-down, so the side of the canal was piled with sawed logs. A lot of ducks and geese were paddling around in the canal. I saw signs for a canal museum; that would have been fun to explore.

Making My Way to Lock 14

Once out of Delphos, the path became a flat, crushed limestone trail next to the canal. Signs dotted the way, pointing out the remains of various locks. A lot of times, all that was left were some old rusted hinges from the gates. 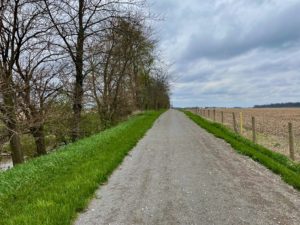 It was so windy and cold, I took my snack break down in the canal to get some relief from the wind. Lunch was similar. I hit Spencerville at lunch time, arriving near the local school. There were porta-potties here – yay! But instead of eating at one of the picnic tables, which were out in the wind, I tucked against a closed concession stand.

After Spencerville, the trail became tree-lined and shielded from the wind. This may be the “Deep Cut” area I saw referenced on signs. After that, there was a stretch where you were walking on a grassy strip in between the canal and the road.

Two interesting animal encounters today. In the morning, two groundhogs raced up from the canal and twice bashed into the farm 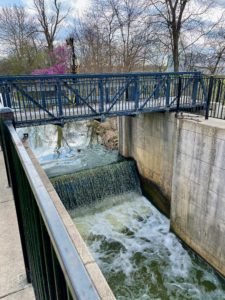 fence on the other side of the path. I thought they were trying to get under the fence, but no – they were fighting each other! Soon they began wrestling and screeching. I got worried at first, as I had a terrible groundhog encounter on the Superior Hiking Trail. But I quickly realized they didn’t care a whit about me. They were just fighting each other. I tried to get a photo or video of them, but by the time I got my phone out, they were back in the canal.

The second encounter came toward the end of the day, when I was a few miles from Lock 14. This beautiful Great Blue Heron was in the canal, a ways ahead of me. Too far to get a good photo. Whenever I’d get close enough to snap one, it took off and flew just a little ahead. This repeated itself many times over. I never could get a photo. Rats.

Shortly before Lock 14, I passed the Bloody Bridge. A sign told a tale of a romance scorned, and an angry man who retaliated by beheading the chap who was with the woman he loved. Bones were later found in the river, believed to be of the man who did the beheading. They say the bridge is haunted today.

I met Emily at the Lock 14 lot. She drove me back to Delphos, and then I drove straight back to Lock 14, where I’m camping for the 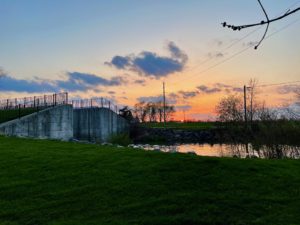 night. It’s a big, open area near a modern lock; if you want to camp here, you just have to notify a local group. There’s a picnic table, which is nice, although it’s so cold tonight I’m typing this in my car. I’ll be fine sleeping, but sitting in a chair outside for a few hours is just too cold.

Today’s most valuable gear: My Hot Hands hand warmers (this brand is the best, by far) and my Therm-a-Rest inflatable sitting pad (yes, I have the green one!).