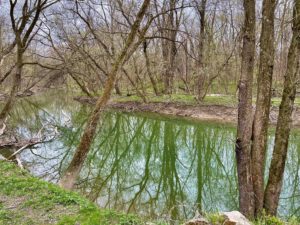 It’s weird to be here in Napoleon, less than two weeks after I left the NCT at Camp Widewater, just a dozen miles (19.3 km) east. After hiking from lower Michigan to this area in late March/early April, I returned home to celebrate my son’s birthday, host Easter for my extended family and to see my father, who has been given less than a year to live. With that accomplished, and Dad doing well, I’m returning for another two weeks.

Normally, I’ve been hiking about 20 miles per day (32.2 km) on this portion of the NCT, as the trail is largely recreational paths or roads, and mostly flat. But my final day two weeks ago included a brand-new trail re-route that added about 12 miles (19.3 km) to my planned 20. I didn’t want to hike that much, as I was fighting tendinitis. So I stopped at Camp Widewater. And since I’d already pre-planned my current itinerary, starting from Napoleon – where I thought I’d end – I decided today would be a half-day so I wouldn’t have to re-do my itinerary. Thus, today’s hike from Camp Widewater to Napoleon.

Striking Out for Napoleon 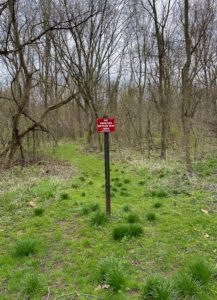 Yesterday, I drove from my home base in Sun Prairie, Wis., to a motel in Porter, Ind., just across the Illinois border. This morning I drove the remaining three hours to Napoleon. Trail Angel John Nemcik will be helping me the next few days. John met me at Napoleon’s Ritter Park, then shuttled me back to Camp Widewater. Soon I was off, with Flat Stanley once again in my backpack.

The trail here is still on canal towpath. Where just two weeks ago everything was dull colored, today the woods popped with color. A lot of greenery is emerging, plus clumps of yellow daffodils and two purple plants I must identify. At one point, the trail went through an old barn (at least that’s where I hiked!). Shortly after that, we crossed a new bridge that John had pointed out. The water beneath (not the Maumee; not sure what it was) was a beautiful green. (See photo above.)

At one point, there were these funny round clumps of grass dotting the trail. It looked kind of magical. Closing in on Napoleon

There was a little road-walking along the way, but nothing too bad. I enjoyed the NCT’s wooden mile markers, which are set every half-mile, It will be interesting to see how far they go. At one point, the trail led through a concrete culvert. Ha! I love quirky things like this.

I found a small saw at one point, so I carried it to a trailhead where there’s a sign for the Miami, Wabash and Erie Canal, then propped it up against the sign. I hope its owner finds it.

Tonight I’m in a Napoleon motel, excited for tomorrow, when I’ll get to finally camp!

Tonight I’m staying at the Comfort Inn & Suites in Napoleon. It’s great – clean and comfy, my main parameters – and handy to the trail. Since it’s going to be in the 80s F the next two days (26-29 C), I’ve got my favorite Coppertone Sport spray sunscreen and have plenty of Body Glide to rub all over my feet to prevent blisters.