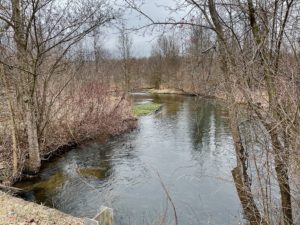 Today’s goal was the Jackson Street parking lot in/near Battle Creek. The forecast was for rain on and off all day, but mostly on, and in the afternoon. So Eric suggested we get an earlier start.

We both drove to Jackson Street, where I dropped my car. Then Eric dropped me off where I started yesterday. It wasn’t raining, but was very windy – 18-20 mph winds (29-32 kph). But since it wasn’t raining, I’m not complaining!

I missed one turn early on, when I was distracted by a colorful home on the left (the turn was marked on the right). I got distracted shortly afterward by a robotic dairy parlor and missed that turn, too.

Eric recommended that I stop in at the robotic dairy and watch the cows being milked. It’s just off the 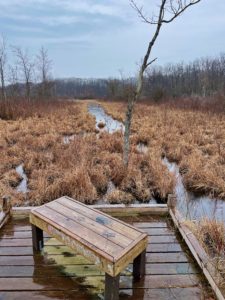 trail, and the facility has a drinking fountain and restroom. At first I was going to pass it by. It was 9:30 a.m. and rain was predicted for 10. I wanted to be off the open roads and in the woods when the rain came. But then I decided to stop after all. I needed a restroom and snack break, and this way I could do both in dry conditions, plus prep my backpack for the rain. And, of course, see the dairy. Turned out to be a great stop all around.

Making My Way to Jackson Street and Battle Creek

After all of my preparations, the rain never came at 10 a.m. as predicted. Not that I’m complaining! After the dairy, the trail wound around the edges of farm fields and past Duck and Wintergreen Lakes. The path became soft and sandy for a while, but nothing too difficult. 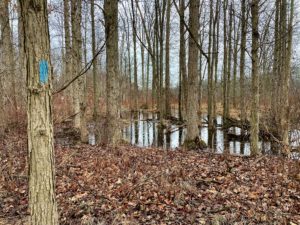 The trail then snaked through the Kellogg Experimental Forest, and that was a highlight as there were fun signs in various spots, such as Bill’s Demise – would love to know the story behind that one! I went off-track again. Not sure why, as the blazes were fresh and well-placed. I was probably day-dreaming.

Around 1 p.m. the rain began, and for the rest of the day it was on-again, off-again. I used my hiking umbrella when it was heavy.

Before reaching Augusta, the trail pops you out onto an overlook of the city. It was cloudy and gray, so the vista wasn’t as impressive as I’m sure it is on a sunny day. Still, it was cool.

After that, there was an interesting stretch through marshy land, where the trail was quite narrow with water and marsh grasses on both sides. I saw two swans. (I’d seen several cranes throughout the day, too.)

After a little more trail, it was a road walk to the car, although a lot of the “road walk” was on a paved 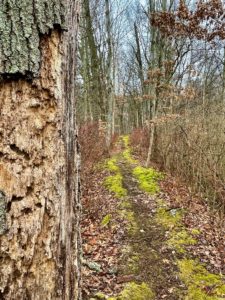 trail along the Kalamazoo River, not city streets. So quite pleasant.

Today’s hike is once again proof that a) every day on the trail is a good day; and b) you can’t always trust the weather forecast.

Oh! Forgot to mention that there are all of these small beech trees in the forests that still have their leaves, which are now a white-taupe. It’s so striking! It evokes images of ghost trees scattered throughout. I took a lot of photos of them, but none evoke the feeling of actually being there. It’s really cool.

This is the hiking umbrella I use when rain is in the forecast. It’s lightweight, so no big deal to carry if the rain never comes. But if it does, it keeps you pretty darn dry.