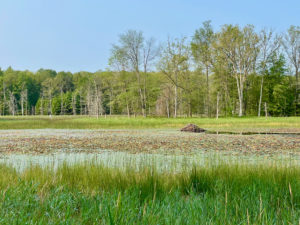 My hiking plan today was up in the air; I could hike to Nichols Lake, which has two official campground, or go a few more miles and (hopefully) camp near Tank Creek.

But first, about last night. After all of those dune buggies/ORVs kept roaring down the road from about 5-9 p.m., I assumed I’d have a noisy night. But when I got into my tent around 10 p.m., the traffic all stopped. I didn’t sleep well, though. Not sure why, but I woke up every hour or less. Oh, well.

This morning I made the switch from day-hiking to backpacking, so I had to reconfigure what’s in my pack. And gosh, my pack is so much heavier!

Making My Way to Tank Creek

Initially, I wanted to stop and camp at Nichols Lake. Why not enjoy a nice campsite near a lake, and where there was water via a pump? But I’d already arranged an early shuttle for Monday night, which was supposed to be a short day. So if I stopped early today, that would hinder those plans. I decided to make a decision once I reached the turnoff.

The morning went well. The terrain was flat, passing through a lot of wetlands. That was a huge help, as I was adjusting to the heavier pack.

I saw two guys ahead of me, whom I later met/passed. They were hiking with two dogs for the weekend, and were from Toledo. I haven’t seen many hikers in the last two weeks.

After the wetlands the trail got a little hilly, and passed many small lakes. The weather was in the low 80s F. (26-28 C.), with not-too-bad humidity, so I was pleased.

I hit the campsite turnoff just before 3 p.m. That seemed too early to stop, so I pushed on until the second Tank Creek 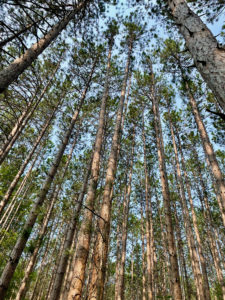 crossing. I found an OK place to camp – nothing great – but it’ll do.

One big snafu came in regards to my Sawyer water filter. Last summer, while on the NCT, I went to use it on a day that had gone awry and where dehydration was a serious concern. It wasn’t working, so we had to push on the last few hours sans water.

When I got home, I replaced the O ring, which is one common reason these filters suddenly don’t work. (People screw the cap on too tightly, which damages the O ring.) But putting in a new O ring didn’t solve the problem. But then, suddenly, it worked. The thing is, I can’t remember what Ed or I did that suddenly got it working! (Age!)

Anyway, I meant to check the water filter before this trip, but never did. So tonight I was out of water, went to filter some from the creek and the darn thing isn’t working again! Same issue. Thank goodness I carry chlorine dioxide tablets as a back-up, so I’m using those. 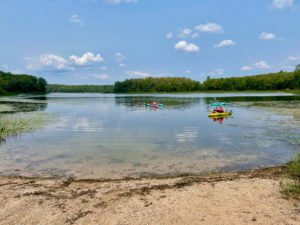 Tonight I’m trying to call in to our book club meeting. Hopefully I’ll have enough service. That’s been an issue.

OH! How could I forget to mention this?! Today, shortly after the trail split, I was hiking forward but looking backwards, making sure I was on the correct path. I stepped on something squishy and heard a hiss of air. I figured I’d stepped on some child’s squeak toy, and the squeaker was broken. It was actually a fairly large snake! The snake hissed at me when I stepped on it.

Still kind of creeped out by the snake thing, and so glad we live in a state without poisonous snakes.