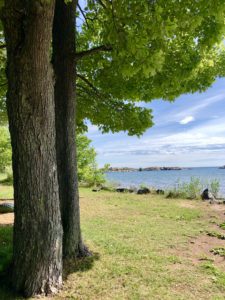 Today’s agenda called for hiking from downtown Marquette to Jeske Flooding, mostly on roads. The forecast called for rain starting in the afternoon and continuing all night. We were supposed to camp in Marquette City Tourist Park, but decided the idea of setting up camp in the rain, and then being stuck in our tents all night, wasn’t pleasant. So we booked a night in the Holiday Inn, where we’d already had a stay booked for tomorrow. I like camping, but not in the rain!

We got the cars in place around 9:15, but between adjusting our clothing and packs for the rain, and trying to find the exact trailhead, we didn’t actually start hiking until 9:45.

It had rained during our drive from Red Rock Falls to Marquette. But once we started hiking, it was sunny, warm and windy. The trail initially wound through some pretty forestland, then led us through Marquette, mostly along the waterfront.

There was some construction on the bike path that the NCT piggybacks on, so we had a little detour. But for the most part it was a lovely day lakeside.

At one point, Amy’s hat – which she’d tied to her pack – broke loose. We didn’t know it until some man ran it back to us. Turns out he’d hiked 100 miles of the NCT in this vicinity last year. 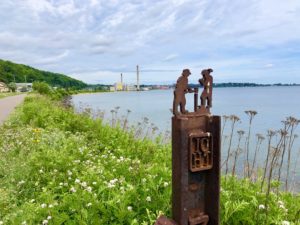 Once outside the city, the trail mostly followed the lakeshore on a gravel bike path. It was flat and easy, although after a while it was a bit tedious and the bottoms of our feet hurt. It helps to have a little change in the terrain!

Eventually, the path dipped a little south and became a lovely soft, dirt path through the woods. It began raining at this point, which was unfortunate because the scenery here was pretty.

The last chunk of the trail was along a sandy service road. By now it was raining steadily, and the mosquitoes were annoying. But we arrived at Jeske Flooding safe and sound.

After checking in at the lovely Holiday Inn, washing up and running some errands, it’s now 8:30 and we’re ready to eat. Hiker hunger!