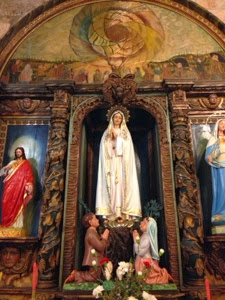 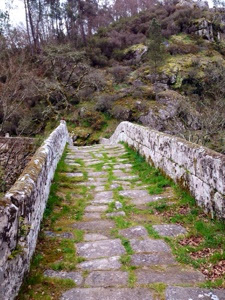 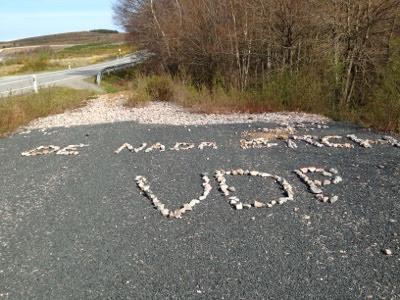 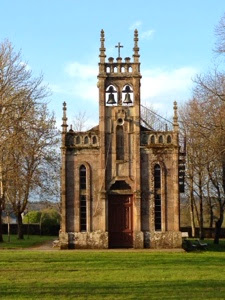 This morning, on the advice of my inn hostess, I stopped for breakfast at Sol Y Luna, right on the Camino in downtown Cea. What a lovely spot! The spacious café also includes a gift shop, so it’s fun to browse while your breakfast is being made. It doesn’t look like there’s much food, but they offer toast, eggs, omelets and an assortment of pastries. I ordered a café con leche and croissant. The owner asked how much espresso vs. milk that I wanted (a nice touch) and included a slice of her cake with my croissant. Everything was great. Best of all, though, were the bathrooms. I rate the ladies’ room the best on the VDLP. Not only was it clean, but it came equipped with all sorts of amenities: air freshener, hand lotion, perfume samples, etc. What a treat!

This is my third time on the Ourense-Santiago stretch. The first time I went through Oseira. The second time I stayed two days and did both routes. This time I went straight to Castro-Dozón. The walk was lovely with no surprises. Spring is really coming to Spain. I can’t tell you how many gorgeous, enormous calla lilies I’ve seen, often growing in alleys like weeds! They’re so expensive to purchase here in the U.S., and the ones you can buy are generally pretty tiny. There is also some kind of yellow weed and/or crop I’ve seen everywhere. I’ve asked a few Spaniards what it is, but no one can tell me. It reminds me of the plant that’s used to make canola oil – is it rapeseed? Laurie, you probably know if anyone does

As I was leaving Castro-Dozón, I saw that they still don’t have any signage to indicate that you should take a dirt road off to the right when you’re finishing up this gravel stretch by some industrial facility. It really doesn’t matter if you hop from the gravel to the highway, as you’ll eventually be directed off-road (on the left) when you need to leave the highway for good. The previously-mentioned dirt road is just to keep you off the highway a bit. Usually pilgrims fashion arrows from rocks to indicate where the path is. This year, there was a not-so-nice note in rocks (see photo), along with an arrow, which I’m assuming was left by one person for a specific pilgrim. I kicked away the rocks that said “bitch” so it simply read, “De Nada. VDP.”

The stretch from C-D to A Laxe was pleasant, although I always forget how hilly Galicia is. This section is no exception. Made it through A Laxe — always a gritty bit — and hit pay dirt when I found the chapel open. I’m blanking on the name now, but it comes after you walk over the Roman bridge and are nearing Silleda. A woman was cleaning the church, so she gave me a little tour. It’s quite colorful and beautiful inside (there’s one photo below). She also had a very nice sello for my credencial.

Here’s a funny little story. Shortly before you reach Silleda, after you’ve passed the above-mentioned church and tuck into the woods, you come upon a little enclave of homes and a small chapel. The first time I passed through, the church door was open with a big gate across it. I pressed my nose against the gate to see the altar, and when my eyes adjusted the first thing I saw was an elderly man sitting in a chair, reading the paper! I was so startled (and embarrassed), I quickly turned away. I assumed someone had purchased the former chapel and turned it into a home, and there I was, staring right into someone’s private living quarters.

So this year as I reached this section, I see a lot of construction taking place on several of the buildings, one of which is the chapel. I ask one man if that’s the church that had been someone’s home, and he says no, no one ever lived in that. Long story short, from what I could piece together in my very-average Spanish, these are all privately-owned structures. In the past, an elderly man was hired to guard the chapel. He very likely moved a chair and lamp in there, and had I stared more I would have seen the church wasn’t totally refurbished into a home. I’m not sure what the new owner is renovating there, but a future Camino will surely reveal that!

Once in Silleda, I stayed at a really nice casa rural, Casa Grande de Fuentemayor. It’s a few kilometers out of the city, but the owners will pick you up wherever you end in Silleda (and drop you off the next day). There’s always special pricing for pilgrims, and the price depends on the season. It’s not the cheapest place – maybe an average pilgrim price across all seasons is 60 euros – but it’s very chic and rather posh.

Also, while I’m not a foodie per se, the food here is fantastic. If you’re going to stay here, I’d definitely ask for dinner and then breakfast in the morning. Everything is a fine-dining experience, plus there are nice touches like freshly-squeezed orange juice (the best I’ve ever tasted), homemade kiwi jelly from kiwis grown on property, etc.

The owner, Andres Maril, was trained in hospitality at the Parador in Santiago (where, he says, he once waited on both Charlton Heston and Anthony Quinn when they were filming The Road to Santiago). Maril said they opened their place in the 1990s and were pioneers in the casa rural/B&B movement, plus in growing your own foods and all that. Oh, the place also has an outdoor pool and whirlpool, which would be great in warmer weather.