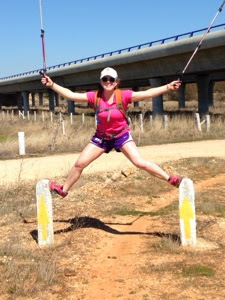 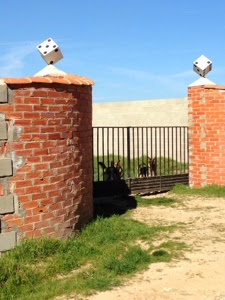 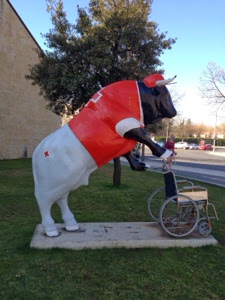 Happy St. Patrick’s Day! We keep forgetting it’s today, because there’s no green beer here, corned beef and cabbage, shamrocks or any other sign of this popular holiday.

Today was another beautiful, sunny day. We were looking at about 23 miles, but not daunted.

We headed out around 9, crossing the Roman bridge into Salamanca’s old town. The city has sparse signage directing pilgrims, but a Spanish guidebook made mention of a few markers here that I hadn’t been able to find before. With Maura helping, we combed the streets and found them, so I’ll have to amend my app a bit.

We hit our first town about 5 miles out, with two more in quick succession. Maura got to see one of my favorite interesting/unusual VDLP spots: a home with a large gate topped with two dice. In one of the towns, I saw a dog trotting down the street with a big stick in its mouth. When it got closer, we realized it was carrying a baguette! If I had gotten my camera out quickly enough, that would have been an award-winning shot. It was pretty comical.

Exiting the third town, I’d been spooked by two aggressive German Shepherds back in 2011. This time I’m happy to report that while they were still there, they were locked behind a secure gate. At this point we had about 12.5 miles to our destination, El Cubo del Vino. The Camino runs along a major highway for most of these miles, which isn’t too scenic. In one part, it leads you under the highway and across the road for the shortest jog, then back under the highway and onto the same road. I couldn’t figure out why last time.

This time there was a sign on one of the concrete pillars holding up the highway stating that following the same path, which hugs the west side of the highway, was the Camino “sin agua” (without water), while going across the road and back under was following the Camino “con agua” (with water). Did that mean there was a water fountain if you went across the road? Or were they saying crossing the road meant you’d have to deal with a flooded area?

Since there were two of us, I sent Maura to take the shorter, “sin agua” route, while I took the longer, “con agua” route. Ha! Maura came running up to me minutes later. She’d gone a short distance on her route and it was totally, majorly flooded. My route was dry. Someone needs to correct those arrows!

About 1.5 miles from our destination, the owner of our private albergue for the night, Berto, was waiting by the side of the road. He welcomed us to town and gave us a map to his place. How nice! We got there in short order, and his friendly wife showed us to our room and gave us water, beer and a lovely sheep’s milk cheese. She’s now doing our laundry. You can’t beat that.