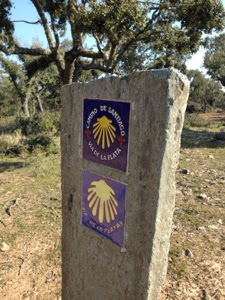 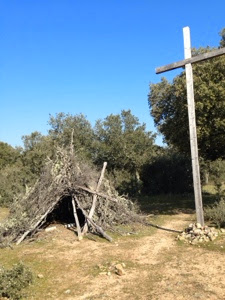 Today dawned sunny and cool. We had about 17 miles ahead of us, including hiking up to the highest point on the entire VDLP. Fueled by cafe con leches, we headed out around 9 a.m.

Since I was last here in 2011, much has changed (for the better). There are several new explanatory plaques about the ancient Roman road, which the VDLP follows, including one sort of recreated section that gives you an idea of its width and general contours.

At the base of Pico de la Duena, the highest point, there used to be a marked detour for cyclists or anyone wishing to avoid climbing the steep, rocky hill. Now it’s crossed off. I think I know why. Last night, our casa rural hosts said the markings on the desvio (detour) were terrible, and many cyclists and other peregrinos routinely got lost. One landowner was also intentionally hindering pilgrims, I think they said. Long story short, you must make the climb. But it’s not bad at all.

When we got to the top, I pulled out some of Riley’s fur and Maura and I each gave Riles a little eulogy of sorts before scattering his fur to the wind. RIP, Riley!

When we emerged onto the highway leading to San Pedro, I was interested to see that now you’re guided off-road for most of the way. This is much nicer than walking 7-8 miles on the highway, as you had to do in the past. There were some flooded parts we couldn’t hop over, though, so we did spend a little time on the road.

Eventually we reached the path to San Pedro. Interestingly, new Camino signage tells pilgrims to continue along the road, bypassing San Pedro and heading straight to Morille. Since we’re staying in San Pedro tonight, we went there. Locals assured us San Pedro is still the original, official Camino, and politics is behind the change — lots of politicians live in Morille, and there’s a government-run albergue they’d like lots of pilgrims to patronize.

Our stop tonight is VII Carreras, a wonderful hotel/bar/restaurant. Mari Carmen, the proprietor, is lovely, as is the entire facility. Bonus: She offered to wash our clothes. That always wins my heart when I’m hiking!