How to Handle Animal Encounters 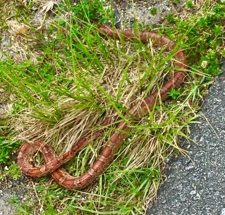 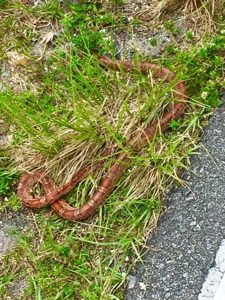 Out on the trail, I regularly run into two kinds of hikers: those who are hoping to have some animal encounters, and those who decidedly are not. I fall somewhere in between. I enjoy seeing wildlife on the trail, even potentially dangerous animals. However, I prefer these encounters to be from a safe distance, and I prefer not to be taken by surprise. Of course, that’s not always possible. Which is why you need to know how to behave around wildlife.

Animal attacks on hikers are rare, although they get a lot of attention when they happen. You’re more likely to die in a car crash than from an attack by a wild animal. Nevertheless, you should do some research before you head out on a trail so you know what animals you may encounter. And keep in mind that even generally innocuous critters like deer, grouse and chipmunks can behave aggressively, depending on the circumstances.

When I was trekking along the Superior Hiking Trail one June, a mama grouse charged at me repeatedly because her babies were nearby. That same trip, a groundhog – perhaps rabid – would not let me pass, hissing and gnashing its long, brown teeth at me. During a hike in Big Bend National Park, a galloping stag nearly ran into me when I rounded a curve on the edge of a cliff. For the next minute or so, it kept racing away from me, then back toward me, as it tried to figure out how to get past me without falling off the cliff. It eventually managed to scramble past along the sloping rock on the opposite side of the cliff edge.

Remember, those are mild-mannered animals. Our hiking trails pass through land that’s home to more dangerous creatures like the alligators and black panthers found along the Florida Trail, and the rattlesnakes and Gila monsters of the Arizona Trail.

To help you safely navigate the woods, plains, prairies and swamps, here’s an introductory guide to safe wildlife meet-ups. 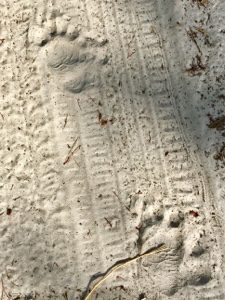 Before we look at specific critters, here are some basic precautions regarding animal encounters.

Like most wild animal encounters, both grizzlies and black bears will generally leave you alone if they become aware of your presence. But never get anywhere near their cubs, as the mother is almost always nearby and will be quite protective. Yellowstone National Park recommends staying at least 100 yards (91 m) away from bears if you spot them.

Grizzlies and black bears interact differently with humans, so it’s important to know which one you’ve just met. A general rule of thumb regarding how to handle an actual attack is enshrined in this saying: If it’s black, fight back. If it’s brown, lay down. Here’s what you need to know. 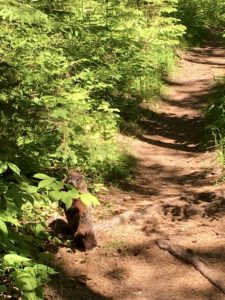 ​
How to Handle Black Bear Encounters

Black bears can be found in at least 40 of the 50 states and most of Canada. While you’d expect to find them in places like the Upper Midwest, New England and the Pacific Northwest, they also live in southern states. I encountered many on the Florida Trail, for example. If you spot a black bear …

How to Handle Grizzly Bear Encounters

Grizzlies roam around Alaska, Idaho, Montana, Washington and Wyoming. Mamas account for 80 percent of grizzly attacks. If you spot a grizzly …

How to Handle Snake Encounters

Snakes encounters can be tricky, since there are so many different kinds of snake and not all of them are venomous. And while rattlesnakes are easy to identify due to their signature rattle, others are not – especially if you don’t hail from snake territory, like me. But whether or not you stumble upon a venomous or nonvenomous snake, here’s what you should do.

How to Handle Deer or Elk Encounters

When it comes to animal encounters, deer and elk aren’t too threatening. But as I noted in my example above, they can be, depending on the circumstance. If you spot a deer or elk …

How to Handle Moose Encounters 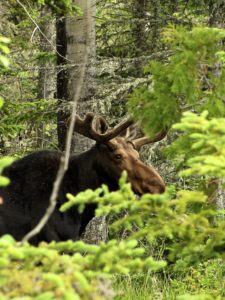 Moose can be dangerous because they’re not as afraid of humans as deer are. They’re also quite a bit larger. Their most dangerous feature is their hooves, not their antlers. If you run into a moose …

How to Handle Cougar Encounters

Cougars, also called mountain lions, panthers and pumas, are pretty scary. But the good news is they’re secretive animals that aren’t often seen in the wild. And if they spot you first, they’ll generally disappear. Still, when you’re in cougar country – generally the American and Canadian West and Florida – avoid hiking after dark, when they’re most active. And if you do run into a cougar …

While all of this may sound ominous, remember that attacks by wild animals are rare. You’re far more likely to be in an auto accident or suffer some other dire fate than being attacked on the trail. Still, being prepared is the best offense.