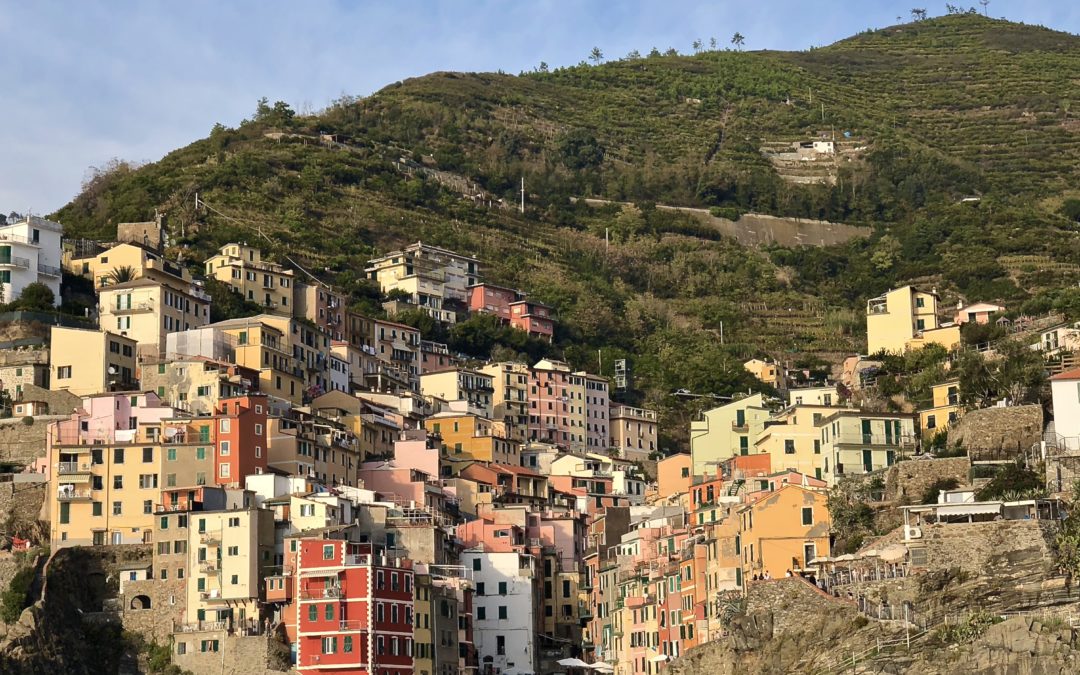 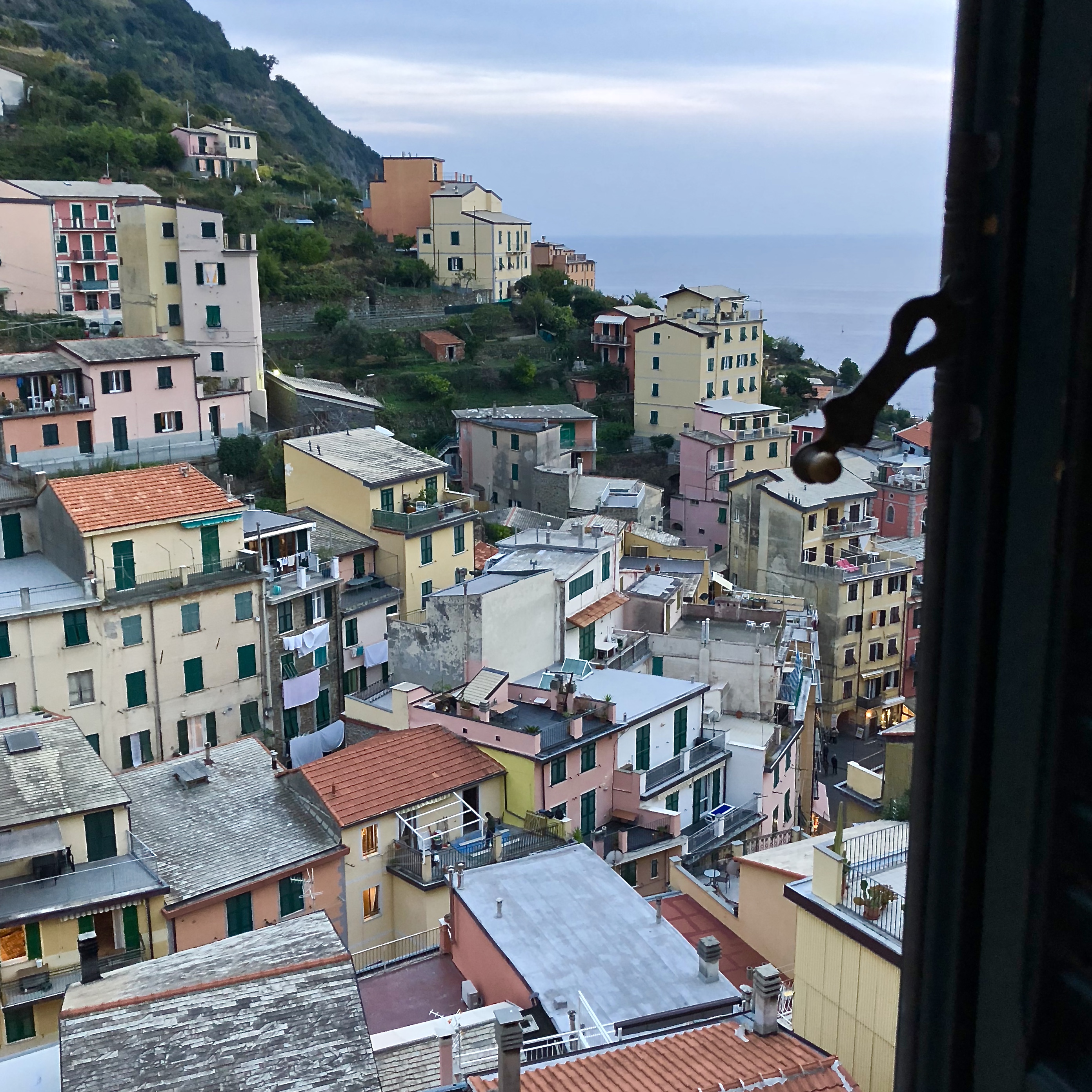 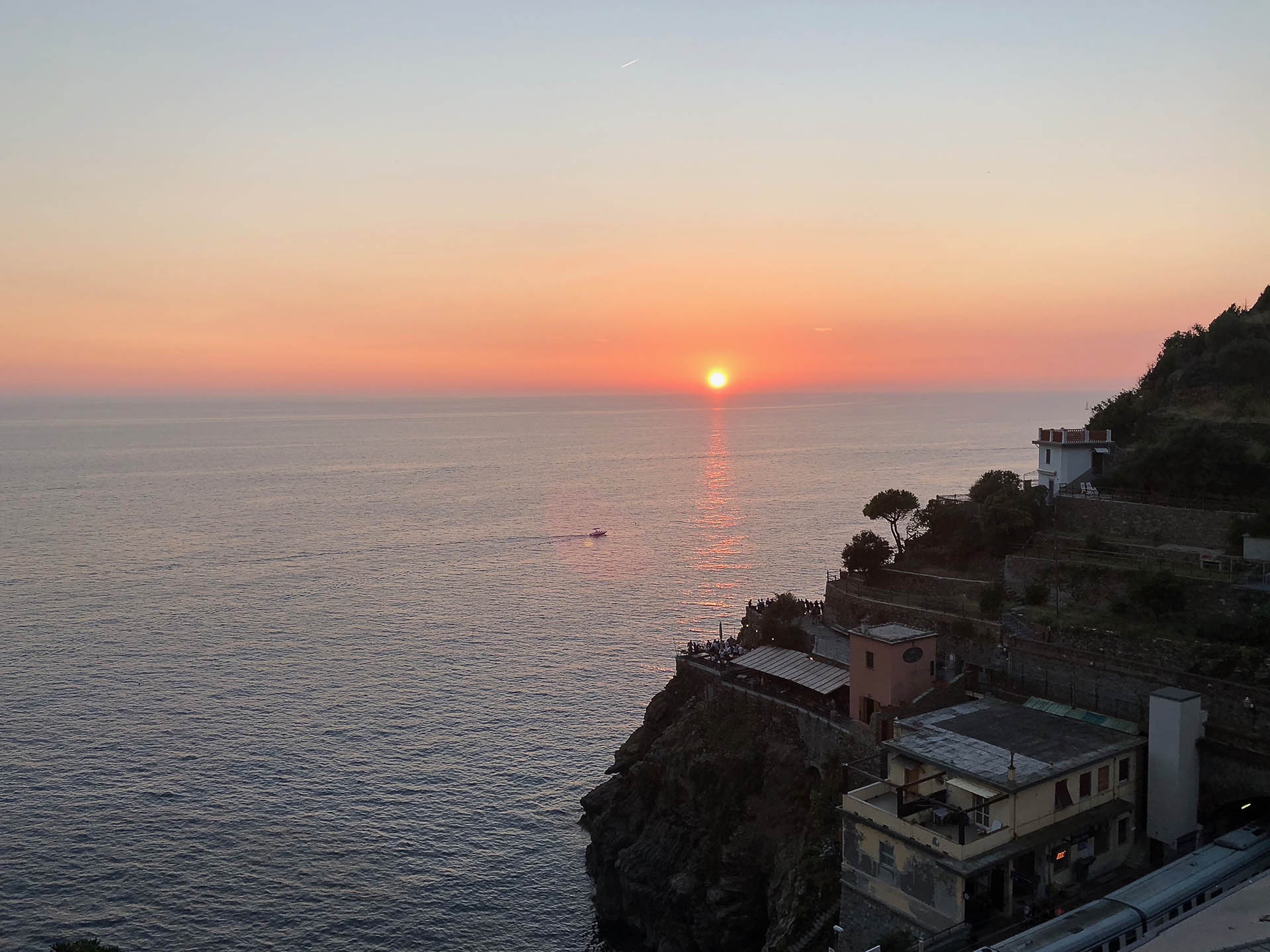 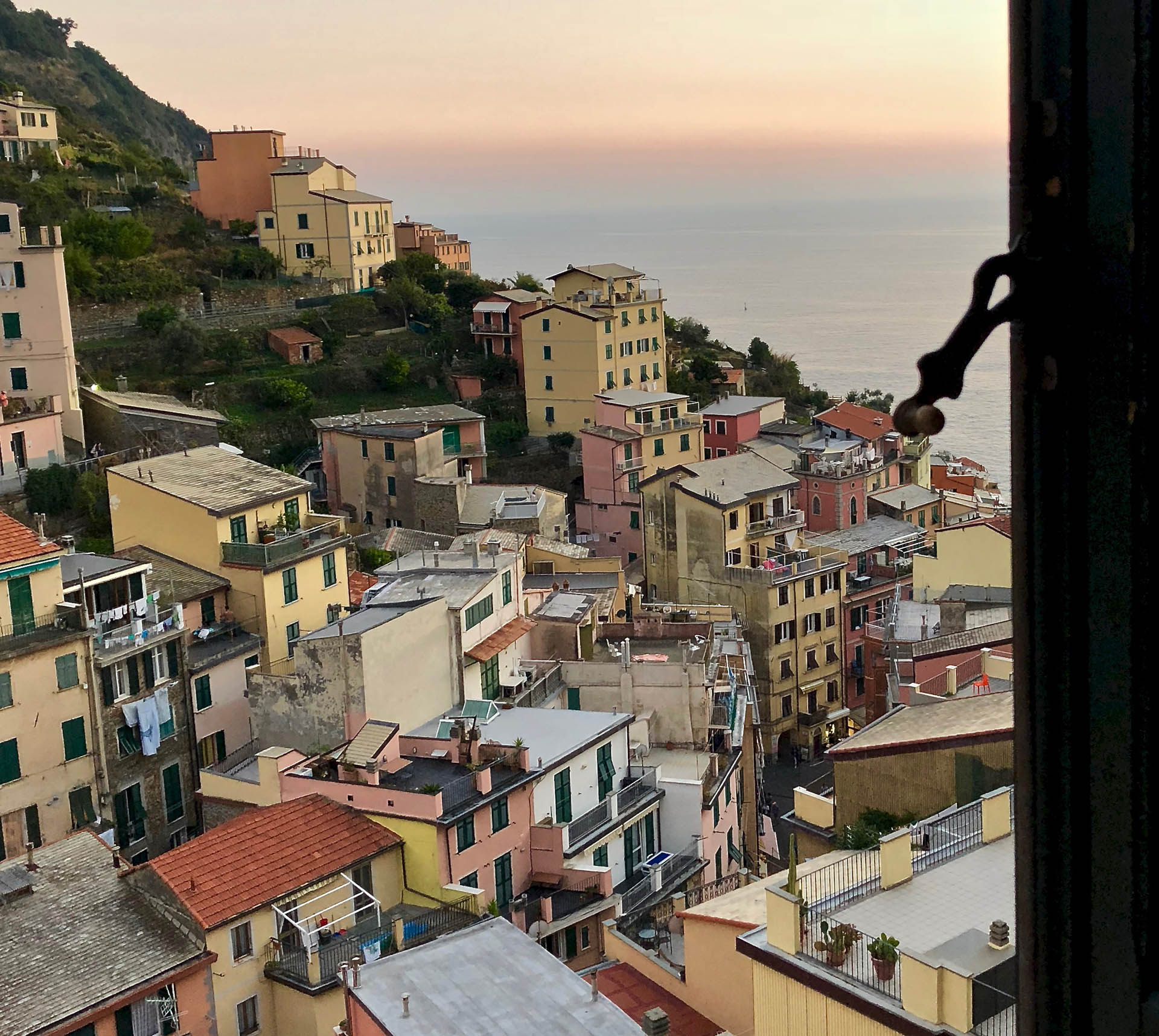 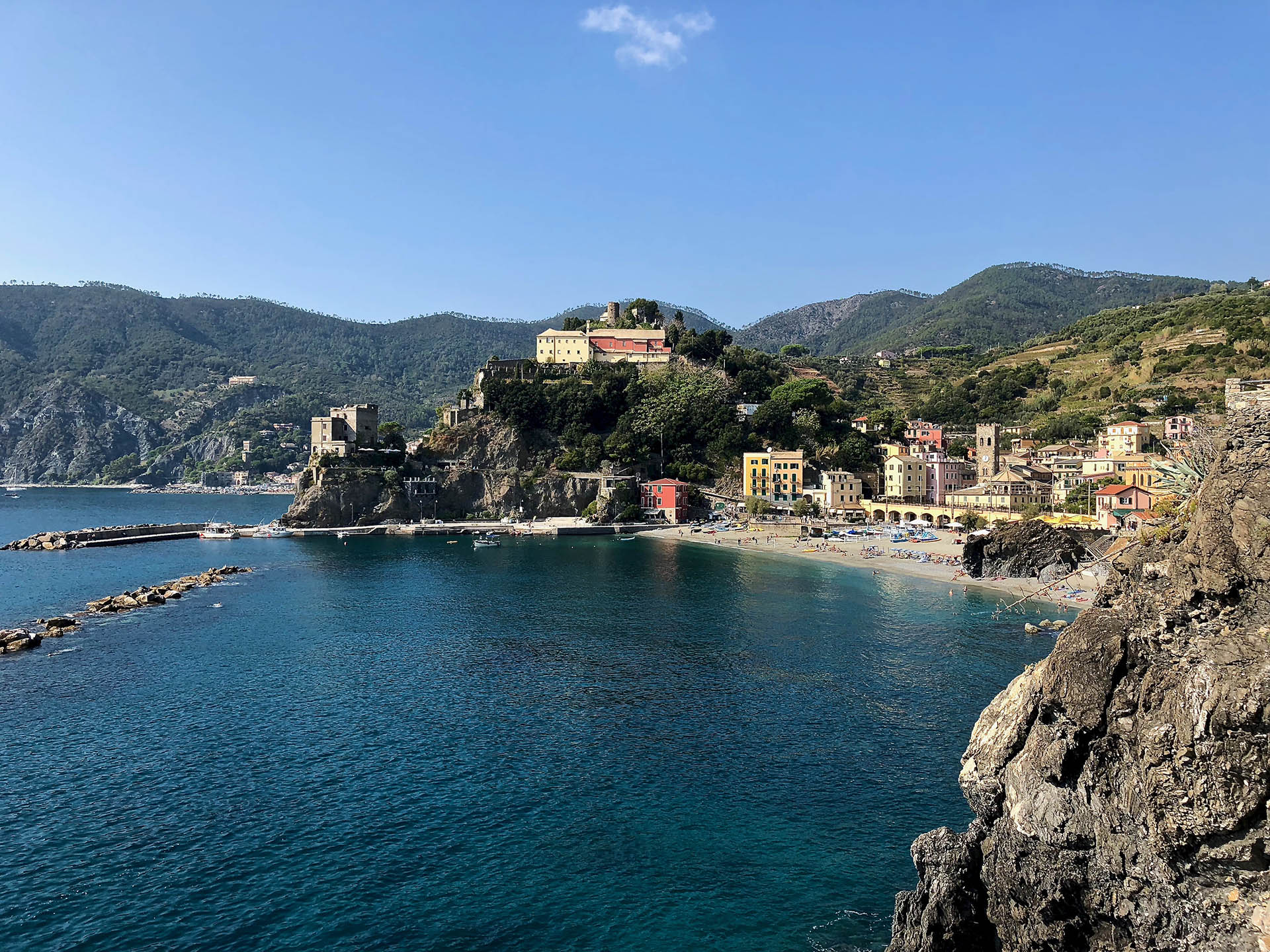 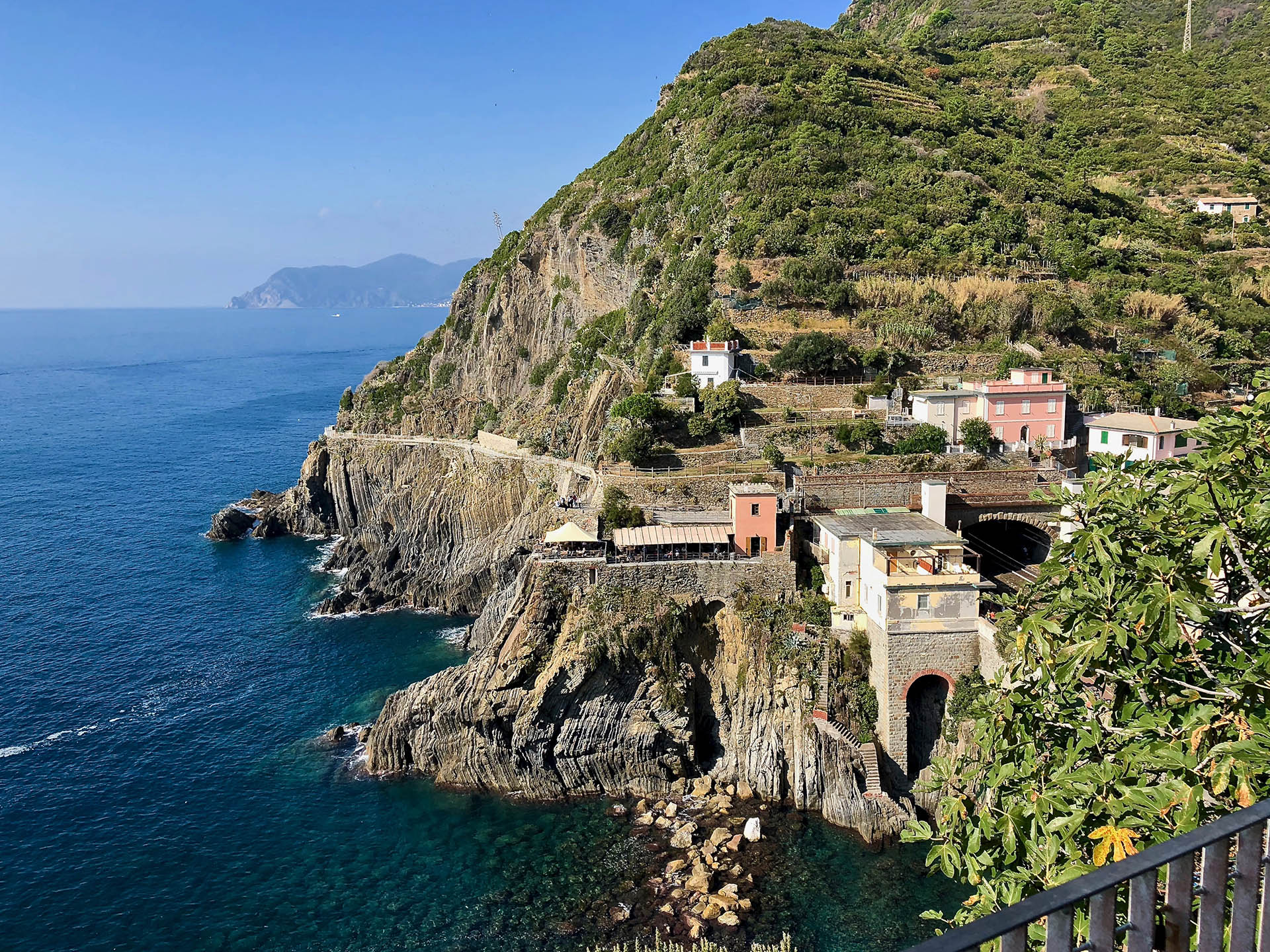 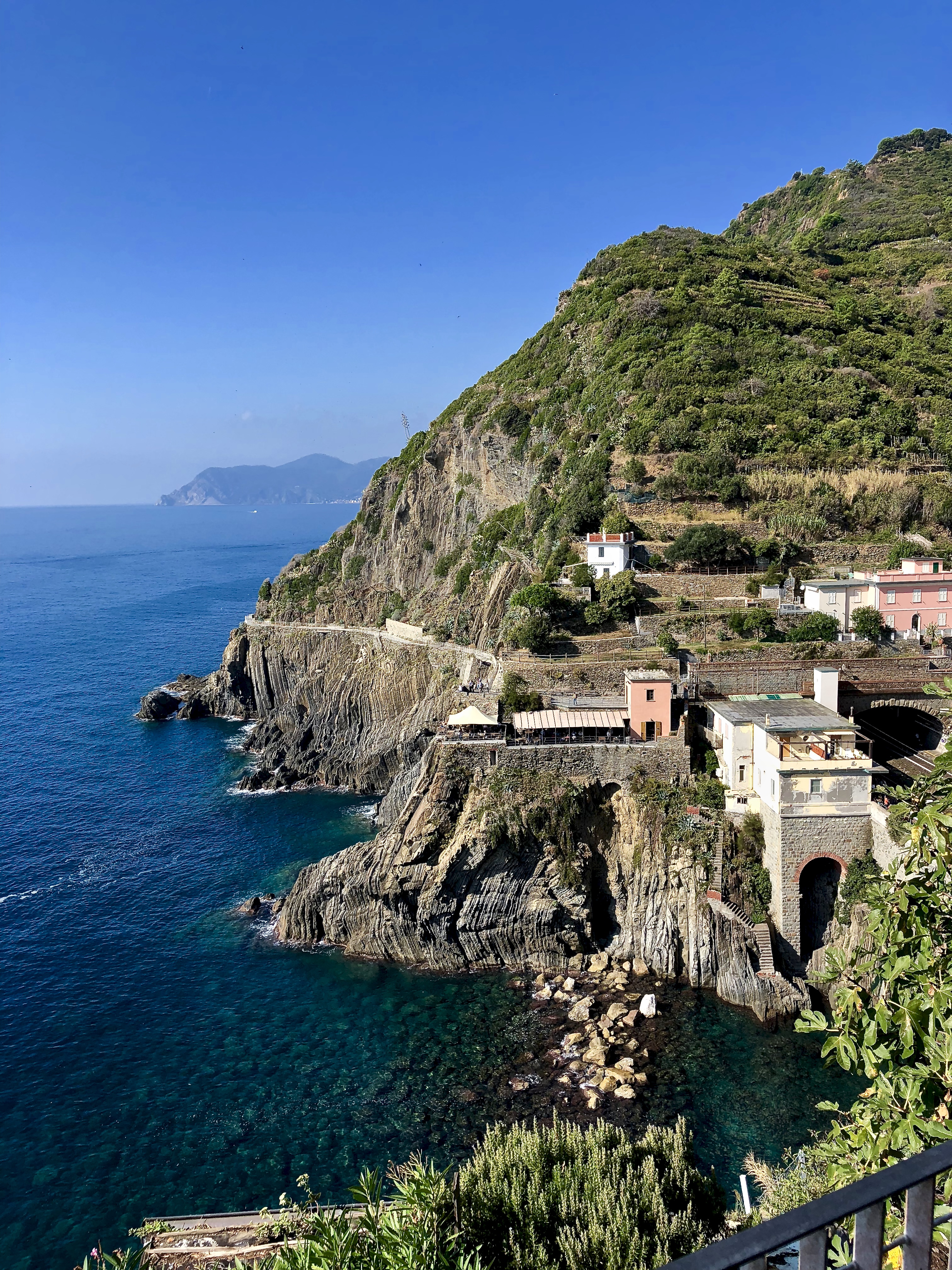 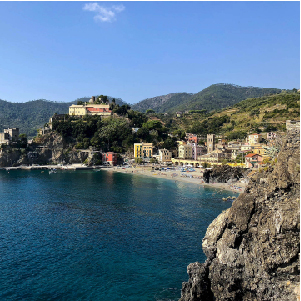 As the train rumbles out of the station in Riomaggiore, I follow the small knot of people heading for the information center next door. Waiting in line, I listen to the attendants telling everyone the same two things:

If you’re going to hike the famous coastal path linking the five towns that comprise the Cinque Terre, you may wish to purchase the Cinque Terre train card. It affords discounted access to train travel, trails and more.

The famous Via dell’ Amore (Lovers’ Lane) section of the path in between the first two towns is still closed, due to damage from a 2012 rock slide. So is the stretch between towns #2 and #3, although an alternate route exists.

When I reach the front of the line, the attendant grabs a large, paper map and highlights the alternate path that begins in town #2. Then she hands it to me with a smile. I tuck it under my arm and head outside to meet my husband, Ed, who is watching our bags. Our Cinque Terre adventure is about to begin.

Birth of a Trail

Cinque Terre (which means Five Lands) is a narrow slice of earth hugging the Ligurian Coast in northwestern Italy. Five quaint villages, linked by train, are tucked into its rocky cliffs: Riomaggiore, Manarola, Corniglia, Vernazza and Monterosso. Travel writer Rick Steves is credited with discovering the Cinque Terre in the 1970s, and his tales of its beauty and delights began drawing throngs of visitors.

In 1997, the Cinque Terre became a UNESCO World Heritage site, and in 1999, Cinque Terre National Park was founded. Today, some 2.5 million visitors descend upon the area annually, dwarfing its resident population of roughly 5,000.

The most popular means of exploring the Cinque Terre is on foot, trekking along its winding, 12-kilometer (7.5-mile) coastal path. If you’re in good shape, hiking the entire stretch at once is estimated to take eight hours, as the northernmost segments are quite hilly. A more popular practice, though, is to hike the path in sections. This affords you time to explore the towns, too. And with trains regularly chugging up and down the coast, it’s a cinch to hop around.

We Arrive in Town

Ed and I had arrived in the Cinque Terre on a sunny October afternoon. It was the tail-end of the tourist season, so crowds were down. While all of the towns have their own charm, we’d elected to lodge here in Riomaggiore, the southernmost village in the chain, figuring it made a logical base for a northbound trek. We’d budgeted two-and-a-half days for our exploration.

Today, with the afternoon well in progress and the first Via dell’ Amore section closed, we opt to take the train into Manarola, the second town, and hike to Corniglia (#3) and back. This section of the coastal trail is closed, too – supposedly due to storm damage, although some whisper it’s really due to residents disgruntled with the ubiquitous tourists. But no worries; I’ve got the map with the alternate route highlighted, which passes through the scenic hamlet of Volastra.

Ed and I strike out, curious to see what this trail is like. The one it replaces, along with the inaugural Via dell’Amore segment, are flat. It’s the northern two, hilly sections that give the hike its tough reputation. We learn our fate immediately, as the minute we set out from Manarola we begin to climb.

We amble up dirt paths and stone steps before arriving at a relatively flat ledge chipped into the cliff’s flank. As promised, the views of the sea and harsh, rocky coastline are impressive from our lofty perch. A bonus: the path unspools past the Cinque Terre’s famous terraced vineyards, intricately created from stones many centuries ago. Our reward when we arrive in Corniglia, sweaty and with muscles atwitch, is a cup of creamy, cold gelato.

Our return hike is more pleasant, as the temperature begins sinking with the sun. We chat a while with Ashley, a young woman traveling solo. She tells us to watch out for the cruise ships when we head into town tomorrow morning. Tourism in the Cinque Terre has sharply increased recently, in part because many cruise ships now steam into its colorful towns, belching out great numbers of visitors who clog the towns’ narrow paths. They have a right to visit, too, she acknowledges, although she prefers it when the villages are quiet.

We arrive back in Riomaggiore just in time to watch the sun melt into the sea in a blaze of fuchsia.

There are many miles of hiking trails in the Cinque Terre in addition to the famous coastal path. Ed and I hiked south the following day from Riomaggiore to Portovenere. This approximately eight-mile route took us 4.5 hours to traverse.

A Real Taste of Cinque Terre

Today’s agenda will test our hiking prowess. We’ll train to Corniglia, then hike to Monterosso via Vernazza. This is the toughest part of the trail, but we’re nevertheless planning to do another out-and-back, a total of about 10 miles.

The day is once again sunny and pleasant. We didn’t purchase the Cinque Terre card, so when we come upon a toll booth at the start of the trail, we need to pay a few euros for access. Fair enough. Not surprisingly, the path follows much of the same pattern as yesterday’s hike: climb up (and up and up), level out, then descend until your quads scream.

We pass a group of young women who tell us the beach at Monterosso is supposed to offer the best swimming of the five towns. We snap photos of each other at an overlook offering a sweeping view of Vernazza down below, its jumble of buildings a mass of colorful dots winking beside the sapphire sea.

Descending into town, we find Vernazza clogged with tourists. Must be the cruise ship folks Ashley mentioned. Sure enough, massive ships are docked in the harbor. And most of the tourists are sporting color-coded badges to help them identify their ships when it’s time to re-board. Slipping onto a bench, Ed and I enjoy some people-watching while feasting on a huge slab of focaccia we’d purchased in Corniglia. Smothered in caramelized onions and topped with cheese, it’s a simple, savory delight.

Fortified by the focaccia, we soldier on to Monterosso. With the sun now high in the sky, sweat cascades down my face and drips off my elbows on the steep march up the mountain, which takes some 20 minutes. One man we pass was clearly thinking ahead; a white sweat towel is draped around his neck, ready to mop up the droplets continuously collecting on his brow.

This final leg appears to be the toughest of all, the land continually swelling and dipping under our feet. And then, finally, the drop into town begins. When we reach Monterosso, our reward is another scoop of gelato, followed by some wading along the rocky beach. A swim would have been nice, but there’s not enough time.

Back on the trail, now heading southbound, I tell Ed we should take another pit stop in Vernazza. Our reward this time will be a glass of limoncello, one of Italy’s signature beverages. Neither of us has ever had limoncello, and I imagine it will be quite refreshing after hiking up and down mountains all day.

An hour later, Ed’s eyes widen as the waitress sets down our two limoncellos. I thought the drink was akin to a spiked lemonade – cool, light and refreshing. But the thick liquid at the bottom of our tiny glasses is clearly some kind of shot. “Oops,” I say, lifting the glass toward my lips nonetheless. “Maybe a little buzz will help us conquer the final mountain.”

That evening, while noshing on pizza in downtown Riomaggiore, I fish out my phone. The Health app says we climbed 260 floors and hiked 15 miles today. Impressed with those figures, I promptly reach for another slice of pie.

There are many miles of hiking trails in the Cinque Terre in addition to the famous coastal path. Ed and I hiked south the following day from Riomaggiore to Portovenere. This approximately eight-mile route took us 4.5 hours to traverse.

A moderately difficult hike, it begins with a long, steep climb out of Riomaggiore. Next up: a few miles of relatively flat trail through the woods. After passing through a small town about halfway to Portovenere, things get interesting. The route offers stunning glimpses of Le Spezia and the sea. More challenging, rocky terrain. And, as a grand finale, an impressive drop down into Portovenere with panoramic views of the majestic Doria Castle, a clifftop fortress.

Make sure to carry plenty of water, as this trail only passes through one town. There’s a fountain near the town church where you can fill up your water bottles.

Give yourself at least 90 minutes to explore Portovenere. The harbor is adjacent to the Gothic-styled Church of St. Peter, an impressive edifice, and other treasures.

The train doesn’t reach Portovenere, so you have three main options for your return: hike back, take a bus to La Spezia and then the train to Riomaggiore, or take the ferry. We opted for the ferry, which is a great choice because it affords you the chance to see an overview from the water. The approach to Riomaggiore by ferry is also picturesque.