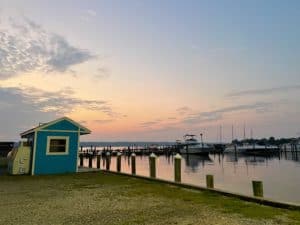 Today’s destination was Doncaster State Forest. But first, last night. My campsite at Goose Bay is nice. I’m tucked among a gazillion RVs whose owners aren’t around. The bay is so pretty (see photo), but my tent is in a site right by huge spotlights. That bothered me all night. I decided I’d drape my towel over that portion of my tent tonight.

<hr
Disclosure: This post contains affiliate links (among regular links) to products I own and like, or which I think you might like. This means that, at no extra cost to you, I will earn a commission if you click through and make a purchase.</hr

So I’d booked a Lyft this morning for a little earlier start than normal to avoid this intense heat. Long story short, they switched drivers on me and the guy picked me up 40 minutes late. He then stopped to gas up and use the restroom. I didn’t get started until 9:30 a.m.

Striking out for Doncaster State Forest

I decided to have a good attitude and just take it easy. I experimented more with my hiking umbrella and found a way to attach it where I can use both trekking poles. Also, when I’m on a busier highway and trucks go by, the breeze they generate lifts it up off my head and gives me a good breeze. 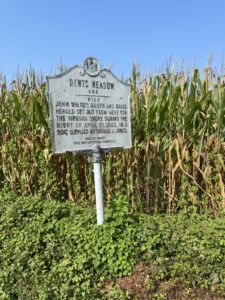 Still, just two hours in my shorts were soaked and I had to change. Thank goodness I brought two extra pairs and one extra shirt. The weather was so hot and oppressive I really couldn’t concentrate on the sights, sadly. Early on I passed a sign saying this is where John Wilkes Booth escaped via the river after shooting Lincoln. At the end of the day, another sign notified me that this is where someone who was maybe president of the Continental Congress, or something as notable, was born.

Despite my umbrella, the heat became an issue. I ended up changing my shorts four times and my shirt three t imes, with the day ending with me wearing my original outfit, that I’d lashed onto my backpack to dry out as I hiked.

Shortly after I rested against a guard rail for lunch, two sheriff’s vehicles stopped me. I thought they were going to say I couldn’t hike on the highway, and I’d have to explain this is a National Scenic Trail. Instead, the men said someone called in about a woman collapsing at a guard rail. Maybe someone saw me pouring water on my neck. I said I was fine, and then I realized there was also a paramedic vehicle there. I feel badly for wasting their time, yet it felt good that someone was concerned about me.

Not too long after the sheriff incident, clouds rolled in and covered the sun. YAY! I heard thunder and prepared to get drenched, but instead I enjoyed cloudy skies the rest of the day and cooler temps.

Back at camp, it appears to have rained here, although not a lot. There are supposed to be showers for an hour tonight, so I can’t use my towel to block the light. Not a huge deal.

Interestingly, there aren’t mosquitoes around camp, but there are house flies. Haven’t experienced that yet while camping.