I got up before 6 a.m. because Maria said they left early to start working. She mentioned 6:30 as a time I should be up and about if I wanted to top off my water supplies once more. So at 6:30 I wandered over, but everyone was still asleep. I topped off my water anyway; I knew they wouldn’t mind.

After breaking camp and getting ready to leave, I wandered over to the group, now awake and doing some kind of group exercise, to thank them and bid them adieu. It was 7:22 a.m. when I struck out for Silver City, some 20+ miles (+32.2 km) away.

After all of those super hot, sunny days, today dawned cloudy and cool. Perfect! I headed out on the road walk, which initially featured gently undulating hills. Although I was making good time, my battered feet – lots of blisters – became quite sore.

Making My Way to Silver City

Around noon I stopped for lunch under the shade of an overpass. By this time the sun had come out and, while it wasn’t super hot, it was hot enough. A strong headwind also hampered 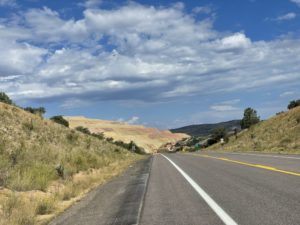 my hiking. The worst, though, came after lunch, when there was a winding uphill that lasted well over a mile (+2 km). That nearly killed me.

Once I crested the hill, though, the road was mostly downhill. I passed a home whose driveway was lined with toilets. I’d love to know the story behind that! I also passed the Tyrone Mine area.

When I was about 6 miles (10 km) from Silver City, I tried to hire an Uber or Lyft to take me to my motel. But this time my feet and knee were killing me, and I was exhausted. Unfortunately, while this is sort of a bigger town, there’s no Uber, no Lyft, no traditional taxis. 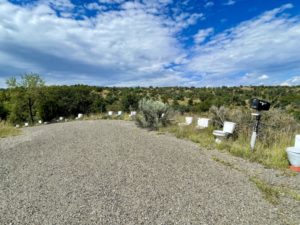 I walked another mile, stopping at the entrance to the tiny suburb  (or subdivision?) of Tyrone. A cyclist on the Great Divide Mountain Bike Route circled over to me. His name was Allen (Alan?) and he was from Phoenix. He suggested I hitchhike. That’s not my thing, but as we were talking a car was coming out of the suburb/subdivision, and he hailed it, mentioning my plight.

The man agreed to take me to my motel. Luckily, he was headed to the local WalMart, which was very close. During the ride, he mentioned there’s a Tyrone Mine and another one in the area. But they both are copper mines, not silver. I can’t recall why the town is named Silver City and not Copper City. Anyway, when he dropped me off he refused to take money for his help. How kind!

My shower was heavenly. I did laundry, pulled more prickers out of my clothes for the umpteenth time, then tried to figure out how to get home. I’d assumed, as this is a CDT hub, it would be easy. NOT.

After much research, asking locals, etc., my husband found a man who operates a shuttle to the El Paso airport, which is 2.5 hours away. So I’ll have him take me tomorrow morning, getting home around 9 p.m.

Late in the day, I walked along the highway to the nearby Walmart, passing another person carrying bags. After we passed, he called out my name. Turned out to be Allen/Alan, the cyclist! He was staying in a motel near mine. How fun.

I’m sad and bummed my hike has come to an early end. But 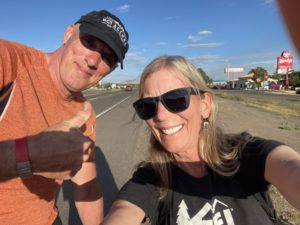 maybe it’s because there’s a lesson I need to learn. Maybe it’s that it’s OK to stop and change plans if things aren’t right. That’s not failure, it’s being smart. I know in my head that hiking requires constant flexibility and pivoting, but I’m not good at that. Another lesson to learn.

Assuming my knee responds well to the scoping I’m guessing I’ll have, I’ll be back. And while hiking just nine days seems super wimpy, I’ll work on that thinking. Because those nine days weren’t wimpy, they were tough. And I did them by myself, at an older age, carrying 10 extra pounds (4.5 kg) of water every day. You know what? Yay me!

Most useful items today: The Tiger Balm Ultra Strength that Maria gave me for my knee. I’ve tried Tiger Balm gel and lotion, but her ultra strength version, which I’d call more of a paste, works much better.