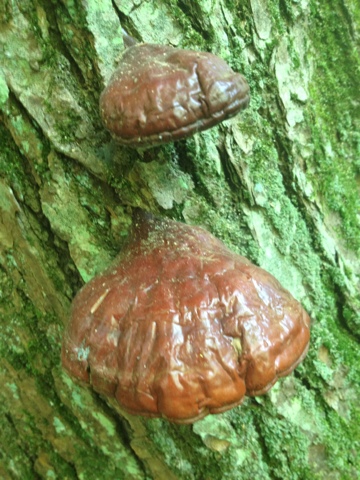 Today’s goal: reaching the Mondeaux Esker segment. So, the day dawned hot once again. Ugh. I can’t wait for the cooler weather to drift in. It’s not supposed to be this hot in September! At least, it never used to be so warm in September when I was a kid. But global warming has ruined my favorite (and birthday) month.

Anyway, today I picked up where I left off yesterday, partway through the Lake Eleven segment. This is in the Chequamegon-Nicolet National Forest. The trail here was just beautiful, and along an almost-perfect path, often soft pine needles. The last two miles (3.2 km) got a bit rough, though, with downed trees and overgrown vegetation.

Interestingly, even though the Jerry Lake segment is right next door, this one was scruffy, with lots of downed trees and overgrown sections. But both Lake Eleven and Jerry Lake were well marked, and that’s always a good thing!

Before I entered Mondeaux Esker, I restocked my food and water supplies at the car. Ed said he’d met some hikers coming out of Mondeaux Esker, and they said the east end was in terrible shape. In fact, they told Ed that if they had to rate it, they’d give it an F. Yikes! Thankfully, the first few miles I tackled today, on the western end, were fine.

Oh, I have to mention that the Mondeaux Esker is enormous, and quite stunning. So, an esker is a glacial feature. Picture a mile or two of ice, the glacier, with a river running underneath. Like all rivers, this one builds up sediment on the bottom. When the ice melted and the river flowed away, the sediment (sand and gravel) remained.

But because glaciers are huge, so are the rivers underneath them. And so are the long, narrow, winding mounds of sediment at the bottom of those rivers. Eskers can be miles long and dozens of feet tall. They’re not easy to climb up!