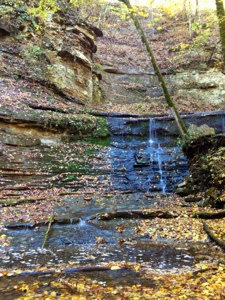 Our last day, and we’re headed to Nashville, baby! It was hard to believe our adventure was almost over.

So, last night the storm really kicked in, with rain and high winds. Then, this morning, it was very foggy when Bill served us our breakfast: bacon, eggs and pancakes. Yum! Thankfully, shortly after we got on the road, the fog burned off and we had a beautiful, sunny day.

Right after we started, we stopped at Fall Hollow, which features a pretty waterfall. We saw another a short ways up. Our server last night told us it was downhill all the way to Nashville, but it seemed mainly uphill to us. One sad part was that while this part of the Trace was certain pretty, the best fall colors were behind us. Most of the leaves here had already fallen off the trees.

While today’s ride was very enjoyable, the end was disappointing. All the materials I read say the Trace is 444 miles (715 km) long. And at the southern terminus, there’s a rock with a plaque. So we assumed there would be a northern terminus marker, and we’d take our photo there, as we had at the start. We also wanted a photo of mile marker 444 (715 km). But strangely, neither exists.

Even stranger, the mile markers stopped at 442 (711 km). Right after mile marker 442 (711 km), the road split three ways, and we didn’t know which way to go. A quick look on my iPhone showed we should take the center route, which dumped us off on McCrory Lane. Still no markers.

Partaking in the Loveless Cafe Tradition

Loads of people we’d met along the way told us we needed to stop at the famous Loveless Cafe when we finished the Trace. It was just past McCrory Lane, so we biked there and asked some café employees if we’d missed a terminus sign, but they didn’t know of one. So that was too bad. We ended up having some ladies take a photo of us by the Loveless Café sign as our “northern terminus” picture.

Overall, though, we loved our adventure on the Trace. And we highly recommend it to anyone who enjoys cycling, beautiful scenery, history and meeting loads of friendly folks.