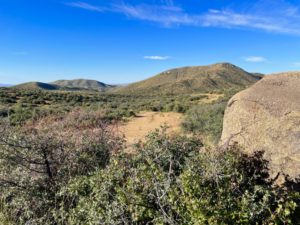 I slept well last night. I heard one cow walking around, so I made a little grunt noise to let it know I was here. Other than that, it was nice. Not too hot, no bugs, etc. – a great prelude for today’s hike past Burro Peak.

This morning dawned warm and humid, though – not a good sign. I hastily ate, broke camp and filled up my drained water bottles at the cattle tank/windmill. And then I was off for Burro Peak Trailhead and beyond.

The day started off pretty well, in that the trail follows a ranch road. No worries about losing your way! There were suddenly lots of junipers for shade (excellent!) and big rocks, which made it much easier to rest and get my pack on/off than from the ground. I was enjoying the hike, although it took a good hour for my bad knee to stop hurting, which is concerning. I was limping a lot and going quite slowly that first hour.

Making My Way to Burro Peak

At some point, the trail left the ranch road and became singletrack. This was challenging initially. While for the most part it was obvious where to go, there were more than a few confusing 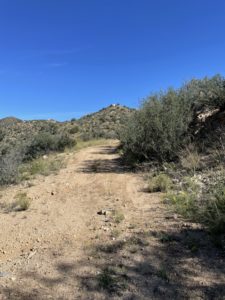 spots, often in sandy washes, where everything, and nothing, looked like the trail. I was getting quite frustrated. At some point I realized cairns – of a sort – were marking the way.

Normally, cairns are a conical stack of rocks. Here, there were some of those. But a lot of the times the “cairns” were more like fire rings, or a jumble of rocks on the ground. Which is why I didn’t realize they were markers. But thankfully, I figured it out. (Another reason it helps to hike with others – more brain power!)

At Juniper Spring Tank, app users said a trail angel always leaves water. But the last entry, from May, said it looked like the trail angel was closing up shop for the thru-hiking season. Much to my joy, there were still a few liters of water there, so I gratefully filled up.

The Going Gets Tough

From there, the trail got hilly and rocky and more difficult. I was 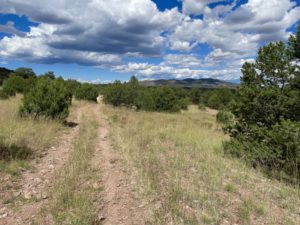 hoping to end my day a mile or two past Burro Peak Trailhead, but I was increasingly worried about water. I wouldn’t be able to refill my supply until about noon the following day, at the final water supply before Silver City. But just one water stop for two days of hiking is not nearly enough!

Then when I reached the Burro Peak Trailhead, I saw a group of young adults with many jugs of water and camping gear. Turns out it was a group with the New Mexico Conservation Corps. They were on an eight-day project rerouting some of the CDT. The group said the weather was definitely WAY hotter than normal. They agreed the water situation was dire.

One woman said she could drive me to Silver City tomorrow night if I wanted. Another member, who had thru-hiked the CDT a few years ago, said a lot of hikers opt to hike along Hwy. 90, right outside the trailhead, into Silver City. It’s about 20 miles (32.2 km) into town, or about half the distance of the original trail.

Throughout all of my long-distance hikes, I’ve always been of the opinion that you hike every step of the real trail if you want to say you’ve completed that trail. Or at least that’s my approach to hiking a trail. Everyone needs to do their own thing, and I respect everyone’s choice.

My one major exception came during my thru-hike of the Arizona Trail. It was raining the morning I was supposed to hike up and over a mountain in Saguaro National Park, and rangers told me 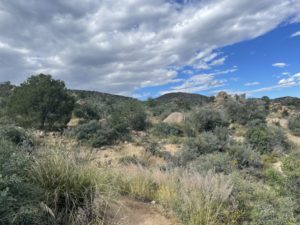 NOT to do so. That rain would be two feet (.6 m) of snow up on top of the mountain, which was too dangerous.

There was no safe way to hike around the mountain, they said, instructing me to skip ahead to the next town. Reluctantly I followed their advice. Later, I learned a woman had to be evacuated from the mountaintop.

Fast-forward to tonight at Burro Peak. The cortisone shot I’d gotten in my knee the day before I left clearly wasn’t enough to help on this rigorous of a hike. I was worried about it. Also, I was tired of the heat and constant worry about finding water. I sure didn’t like the idea of having one water source for two days of hiking, either – that’s not smart or safe. If a lot of CDT hikers use Hwy. 90 instead of the official route, no matter the reason, so would I.

Maria, the crew leader, helped me set up my tent due to my bum knee, plus gave me water from their stash, Tiger Balm for my knee and electrolyte tablets. Soon I was in my tent, drifting off to sleep to the sounds of the crew’s quiet chatter.

Most useful items today: The jelly beans and dried apricots I ate. When it’s super hot out and your normal energy bars seem disgusting, it’s often easier to eat dried fruit and jelly beans. (Brach’s are my favorite jelly beans.) Try it!