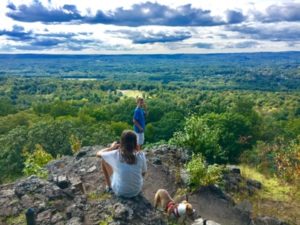 Heading out from Sunrise Park today, it was crisp and cool. And as soon as we started hiking, we ran into a large group of hikers. The hikers were part of a club and/or Meet-Up group. One woman in the group had lived in Appleton, Wis., for a while, so it was fun to meet someone else from Wisconsin.

So, there aren’t many spots to camp along the NET, but we spotted one here. And since we knew Parks wanted to camp as much as possible, we scoped it out for him. The campsite was spacious and quite nice.

Moving on, the trail led us up some mountains – first West Suffield and Peak Mountains – where we enjoyed lovely views. There’s always a scenic spot to take a break or have lunch on this trail, that’s for sure.

The Path from Sunrise Park

Around noon, we ran into a dad and his 5-year-old son, Fisher. The two were hiking several miles of the trail, and Fisher could keep up. It was pretty impressive!

Later, Stubs and I ate lunch by a stone fireplace in the woods. We’ve seen several stone fireplaces now, so it seems there were lots of cabins up on the mountaintops at one time. I wonder what it was like to live there?

We ended the day hiking through Talcott Mountain State Park, and saw many families, couples and singles out for hikes. Per usual, we’d passed Parks earlier in the day, and he said to make sure and see the Heublein Tower. The tower is in the park. In fact, the trail passes right by it. Unfortunately for Parks, it was closed when he passed by. Fisher’s dad also told us to see the tower (tours are free).

So, Parks said the tower closed at 5 p.m. Unfortunately, when Stubs and I were nearing the tower, it was almost 5 p.m. That meant it would come down to the wire. So we hiked two miles up the mountain as fast as we could, and got to the tower four minutes before it closed. Panting, we asked the attendants if we could still get in. Thankfully, they said yes.

Well, we were so excited – until we realized that meant we had to sprint up five or six flights of stairs to reach the tower look-out, take in the views, and get back down so they could close up. Ouch! In the end, we didn’t get to see the museum displays, but we did figure out that a man built this home/tower for his wife. The guys is also somehow behind A-1 steak sauce and Smirnoff vodka.

Tonight, our hike ended around a reservoir, where the path was pretty flat. YES! Our new motel tonight is the Hampton Inn in West Springfield, Mass. Another clean, comfy place with easy access to the NET.