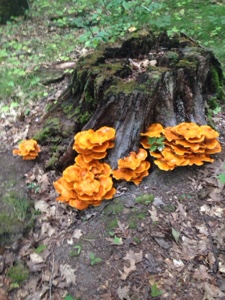 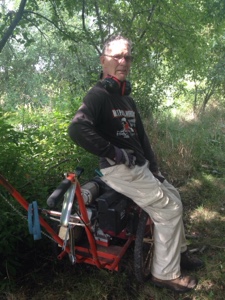 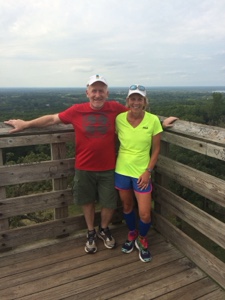 My husband, Ed, took over today. It was supposed to be in the 90s again (boo), but cloudy all day. It was cloudy for the first hour or so, and then the sun came out when I hit the Merton segment and stayed out. Sigh.

Two years ago I walked on the Bugline rail-trail when it was still being built; it was lumpy dirt. The real trail alongside was too overgrown to navigate. This time the rail-trail was beautiful, smooth blacktop, but the real trail was definitely navigable, so I chose the latter. During the hike, I ran into an IAT volunteer mowing the trail! I didn’t get his name; he wasn’t too talkative, likely due to the heat. But his photo is below. And yes, I thanked him for maintaining the trail for us! 🙂

It was fun to hike along the golf course. In 2013, I couldn’t find the first part of the trail and was stopping golfers to figure out where to go (they didn’t know, but I eventually found it). This time it was easily marked, and I believe the path was slightly different than two years ago.

Lapham Peak was stunning. I tried to take photos of the oak savanna, but they’re pretty dark. But it was gorgeous. The re-route was also very nice (kudos!), and I even stopped to climb the tower with Ed, despite my aching feet.

The day ended doing a little bit of the Waterville segment. I remember the part off the rail-trail being scruffy in 2013, but it was very nice today.

When we finished, we stopped for a fish fry at the Delafield Brewhaus. Wow. The service was quite slow, but the fish fry was one of the best we’ve had in ages, and their beer was fantastic, too. I ordered a stout, which was so thick and creamy Ed said it was like a latte.