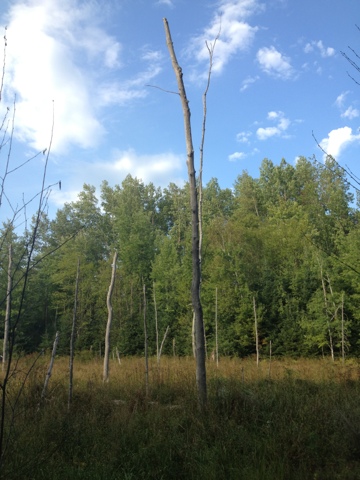 The Ice Age Trail is only about half complete now, so to do a thru-hike you have to hike one segment, then walk or run to the next one along a “connecting route” if the next segment doesn’t directly follow. The Ice Age Trail Alliance gives suggested connecting routes, but you can also take your own. The connecting route listed for today was about 40 miles to get you from Cornell to a spot in the Chequamegon National Forest. I mapped out a route that was more like 26, but you had to spend many miles walking on the shoulder of busy Highway 64. It was not a fun day.

At first, walking on blacktop is fun. A relief. No bushwhacking. No scratches from wild raspberries. No tripping on rocks or sticks or climbing over downed trees. No mosquitoes! But after a few hours, it’s awful. The bottoms of your feet kill you. Part of my route took me along Polley Lane, a quieter road that parallels 64. No traffic, but it was a gravel road. It was sort of a relief on my feet, but sort of not. It was sunny and hot out, too, so there was virtually no shade, until my last few hours when, blissfully, some clouds moved in.

My tendonitis appears to be totally gone – yay! – but my tweaked knee said it would like another day or two of walking, so I complied after trying a few quarter-milers. It was frustrating not to be able to run along blacktop – my feet would have felt much better, because I would have gotten off of it sooner – but again, I have to keep the big picture in mind.

At the end of the day we reached the Lake Eleven segment: 14 miles in the beautiful Chequamegon National Forest. I did the first 3.8 miles of Lake Eleven, and it was wonderful. Fingers crossed the rest of the segment is just as nice.

Oh! Can’t forget to note that I’ve now completed one full week. How many miles have I gone? I haven’t calculated yet (I’m too tired at the end of each day), but it’s somewhere around 200. So I’ve got about 900 left.

Oops. Can’t forget to mention one fun thing. A few miles into my walk along Hwy. 64, Ed ran up to me and insisted I open a birthday gift. Now, I hate opening birthday gifts early, and he knows that. But he insisted. As I unwrapped the package on the shoulder of the highway, I was almost blinded. Two of the blazest-orange shirts I’ve ever seen tumbled out. Ed said the butter-yellow shirt I was wearing made me blend in with the vegetation, and these shirts would make me more visible. Did they ever!