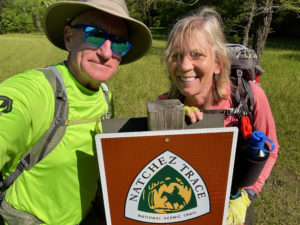 Because Ed is leaving tomorrow, today’s newly-amended itinerary called for hiking all of the Yockanookany section of the Natchez Trace National Scenic Trail (NTNST). Again, there are five sections of NTNST along the Trace. Yockanookany is the third of the five, and the longest at 24.9 miles (40.1 km). This section runs from mile post 108 to 131 on the parkway, and right now the parkway is closed from mile post 115-135 because crews are cleaning up extensive storm damage from 2020.

I always say something goes wrong every single day you hike. It can be something minor, like taking a wrong turn and quickly discovering it, to something major like an injury. Today was on the tougher side. It took us 90 minutes to stage our cars this morning, due to a detour around the closed parkway. So we didn’t get started until 9:40 a.m. That’s a late start for a 25-mile (40.2-km) day, not to mention during a time of year when the sun sets around 7:30 p.m. But our optimism prevailed!

The trail initially featured good signs and markers, leading us past the Ross Barnett Reservoir. It then led us up on the parkway, after which we were supposed to head down on the west side of the road. We didn’t see any signs pointing us off the parkway, so we missed maybe a quarter-mile (.4-km) section of woods. No worries; we got back on track.

This southern portion of Yockanookany, to Yandell Road, was lovely. It was gently undulating through pretty forestland. There were some muddy spots, but nothing bad. The National Park Service owns 200 yards (183 meters) of land on either side of the parkway, if memory serves. So you can’t really get lost. The parkway is to your right, and private property – usually marked by fencing – is on the left. Also, since there isn’t much undergrowth here, you can often see the parkway as you hike.

We were hiking faster than 2.5 miles per hour (4 kph) when we finished this section. If we could hold this pace, we’d get to our car right around sunset. Not bad! Little did we know … 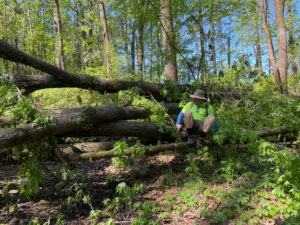 So, the map of this trail segment shows the trail running directly west of the parkway, with no deviations. When we started the next portion of Yockanookany, the trail became scruffier and marked with pink ribbons. Soon we were heading south, not north. Assuming an error, we backtracked – only to discover the trail made a cloverleaf of sorts here (not indicated on the map). So we lost at least 20 minutes, and we didn’t have 20 minutes to lose.

Back on track, the trail became harder to hike. There were lots of thick sticks on the ground and thick chunks of bark that made for slow going. Plus, over the next few miles more and more large, downed trees blocked our path, and it became hard to follow the trail. It was clear there was much storm damage.

At one point, we passed a couple hiking with about eight young boys. They said the trail up ahead of us was terrible, and they’d had to walk on the parkway. Soon enough, we saw what they were talking about. 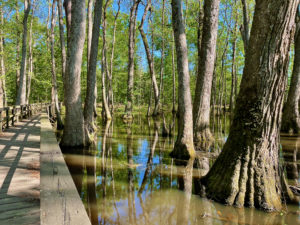 We made our way onto the parkway via an access road, as the trail damage was too extensive. Viewed from the road, it was maybe even more horrific. Although the parkway itself is cleared, there are downed trees everywhere in the woods/trail. Hiking bridges are smashed. It looks like a terrible tornado went through. I’m shocked that this section of the trail isn’t closed to hikers. The NPS website says it’s closed to equestrian traffic, but not to foot traffic. Honestly, it would be ridiculous to hike this section.

The one positive is that we passed the Tupelo-Bald Cypress Swamp while on the parkway, a beautiful swamp where the trees are reflected in the water,.

Ed and I hoped to get back on the trail for the last eight miles (12.9 km). While the woods are much more intact here, the ground is severely flooded. We ended up walking the last 12 miles (19.3 km) on the parkway. It was disappointing for sure, but Mother Nature calls the shots.

We set up camp at the northern Yockanookany trailhead as the daylight dwindled. Unfortunately, one section of my tent poles had slack cording, and it took forever to get the tent up. Two of my four poles are now duct-taped together. I’ll need them restrung ASAP.

While Ed and I ate dinner, enjoying the silence since this portion of the parkway is closed to all but local traffic, a motorcyclist drove up into the parking area, then parked and turned his lights off. At that exact moment our camp lantern went out. It was creepy!

Ed shone a flashlight at the guy and asked if he needed help. Long story short, the rider said he was just taking a break. Then he began chatting with us. He is a blues guitarist and a pretty interesting character. He seemed a bit tipsy, and said he needed someone to talk to and who would listen to him. We obliged – everyone needs a compassionate listener from time to time – but by 11 p.m. we had to start packing up so he’d leave. An interesting day all around!