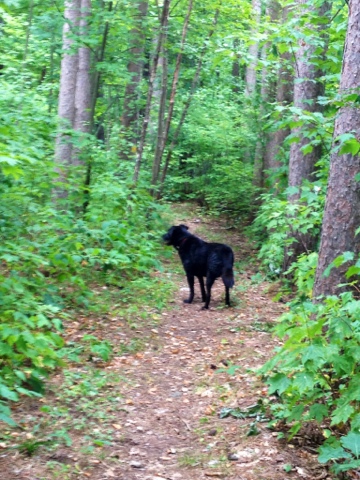 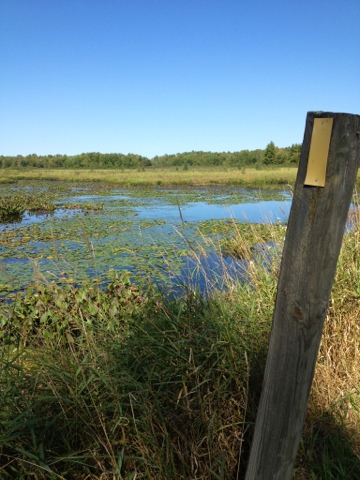 Today’s schedule called for hiking from the Chippewa Moraine segment and through the Chippewa River segment. So, yesterday’s cold laser treatment definitely helped my tendonitis and knee. Dr. Lisa Tenold said it would be best to walk all day, and I give myself a ton of credit for doing just that. If you know runners, they like to run. And today I had one really prime trail, Chippewa Moraine (7.8 miles [12.6 km]). All morning I felt like I had an angel on one shoulder and the devil on the other.

Angel: You’re being so good to walk! This will help speed your healing, and you’ll be stronger and faster in the long run.

Devil: You wuss! You can run a little. Just do one mile.

Devil: Then just run to the next blaze. Surely that won’t hurt anything.

And so it went. Anyway, I have to stress Chippewa Moraine is a fantastic trail. Definitely one of my favorites so far. It was extremely well maintained, had few rocks or roots, was very pretty and had just the right amount of undulating terrain. The other trails were mediocre at best, and all had some terrible stretches again that entailed bushwhacking. There were also lots of downed trees in the way. Outside of Chippewa Moraine, it would’ve been nearly impossible to run almost any mileage in the others. So I suppose that was good.

So Ed parked at the Ice Age Interpretive Center in Chippewa Moraine, about two miles in. A black lab bounded up to him, and the warden said it was Stanley, a neighbor’s dog, who everyone knew and who was very friendly. Stanley then found me on the trail. Luckily, he raced down the trail straight at me. If he’d come barreling at me from the woods, I probably would have thought he was a bear.

Well, good old Stanley stuck with me for the remaining 5.8 (9.3 km) miles of trail. He’d bound ahead, sniff things, then turn around and look at me as if to say, “You’re still coming, right?” At one point, I stopped to jot down some notes for my stories. I was stopped maybe two minutes. Suddenly, Stanley was at my feet, looking up at me with these sweet eyes that seemed to show great concern. I just knew he wanted to make sure I was all right.

Ed found me again near the end of the segment, Stanley nearby. The three of us ambled along, and then our path crossed a small road. A farm was off to the left. There was a paddock with horses and a corral with a calf. Suddenly, Stanley took off like a bullet.

He raced into the pen with the calf and began chasing it in circles. I saw a cat that must have been in the pen, too. It flew into the air, then ran away. The poor calf began crying out as it tried to escape Stanley, then ended up crashing into a barbed gate. All the horses began whinnying.

I made a move toward the barn to help, but Ed said, “Keep walking. It’s not our dog.” As we tucked back into the woods, we heard gunshot. “The farmer isn’t shooting Stanley, I hope,” I said. Suddenly, he was at our side again.

“Stanley, you were a very naughty dog,” I said to him. Then he ran off into the bushes and we never saw him again.