Day 5: South of Clinton to Jackson

Our goal today was reaching the 100-mile (160.9-km) mark, which is in the Jackson, Miss. area. The storm that was predicted did sweep through overnight, so we woke up to gray, drizzling conditions. By the time we headed out, though, the rain had ended. Yay!

As Ed and I were shuttling our cars, we had to stop while a bulldozer pushed downed trees off the parkway. They’ve really been hit hard this year with bad weather. We saw an awfully lot of flooded land, too.

The first few hours were cool, with OK traffic. At one point, I helped a turtle cross the parkway. Shortly after that, I found a young woman’s cell phone, with a pouch on the back that held her driver’s license, college ID card and some credit/debit cards. The phone appears to be dead due to the rain, but I grabbed it and tried to contact her so she knows her phone and cards are safe. Not sure how long ago it was lost. 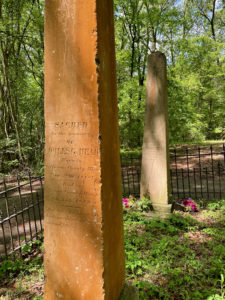 Not to be a downer, but today just wasn’t too much fun. The weather was cooler, but sunny and with no shade. So we were using lots of sunscreen. But the worst part was the traffic on the parkway. There are no shoulders for hiking, and the majority of users appear to be locals flying along at well over the speed limit. So it was kind of a slog.

That being said, there were a few bright spots. We ran into a handful of cyclists, which was nice. They’re frustrated by the traffic, too. One older guy, a local, happened to be a Packers fan and said one item on his bucket list is to go to a game at Lambeau Field in the winter. He wants to eat a brat, drink a beer and have his eyelashes freeze. Ha!

We also enjoyed the Cowles Mead Cemetery. Cowles Mead ran a tavern on the Trace and was acting governor in 1806, during which time he ordered Aaron Burr’s arrest for treason, after Burr shot and killed Alexander Hamilton. 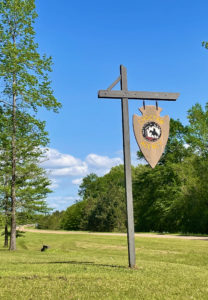 We’ve been strategizing for days on how to handle Sunday. Ed leaves for home on Monday. Per my itinerary, we’ll reach Cypress Swamp, north of Jackson, tomorrow night. Ed would then head home from there on Monday, after we shuttled my car forward. Well, Cypress Swamp is part of the 23-mile (37-km) Yockanookany section of the National Scenic Trail. Or I should say, it’s along the parkway and the NST parallels the parkway.

But the parkway is closed for 15 miles (24 km), due to last year’s storm damage, I believe. So there are logistical issues with parking Ed’s car. I think we’ll be doing some jumping ahead and then backtracking in the new few days, until my friend Amy joins me.

Hiking is always an adventure, and always involves lots of pivoting and patience. I need more of the latter!

Book your stay at the Holiday Inn Express Clinton here!