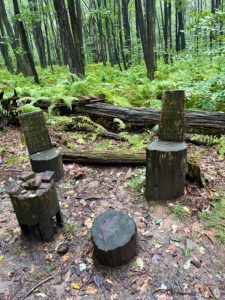 I must be thankful for today’s hike to the Route 56 shelter. It could have been so awful! So here’s what happened, starting with last night.

When I tucked into my tent for the night, the wind began to blow. Very strongly. This kept up for several hours. At one point, I awoke because it seemed like someone was outside with a flashlight. It was midnight. I was creeped out, but too tired to grab my mace and too nervous to look outside my tent. I have no idea what the light was.

Around 2 or 3 a.m., the heavens unleashed. There was a full-blown thunderstorm with thunder that shook the shelter and lightening that zigzagged across the sky. I figured the shelter would leak a little and my tent would get wet, but I stayed snug and dry all night. Yes!

Assessing in the Morning

Around 5 a.m. it was still raining cats and dogs. My weather app showed thunderstorms raging until late afternoon. I turned off my alarm; no sense getting up early. I wasn’t going to hike in severe weather. I started brainstorming alternate plans, but decided to go back to sleep and reassess a 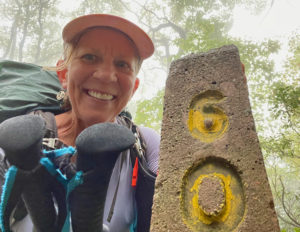 few hours later, when I had the latest weather updates.

Good thing. When I got up around 7 a.m., the weather forecast now called for the rain to stop around 8 a.m., then resume from 2-4 p.m. This meant I could hike the bulk of the day’s mileage in between the drops. So I hustled to break camp and hit the trail as soon as the rain stopped.

When I hit the trail, it was a little creepy and depressing. A heavy fog hovered overhead, and everything on the trail glistened with the rain. No one was out but me. Surprise, surprise. 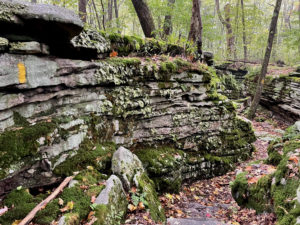 After some terribly hilly miles/kilometers the first few hours, the terrain flattened out. YES. I went through some logged and prescribed burn areas, which are never very pretty. But then some of those ginormous rock formations returned. Those are always fun, because the trail often winds in and around them, sometimes making you squeeze through some really small spaces!

At one point, I passed another hiker. Southbound, of course. Everyone except me hikes this trail southbound!

So today I was set to hit camp around 5 p.m., which was sweet! And I did. I found my shelter, and the best thing is that there’s a burbling creek right next to it. While these campgrounds have pumps, they’re often hard to work for one person. It takes forever to fill your water bottles, because the minute you stop pumping and put your bottle under the spigot, the water stops flowing. And the water is filled with iodine, which doesn’t taste (or look) good.

But with a crystal clear creek handy, I was able to easily gather clean, cold water to filter, then wash up and set up camp in the light. I was alone at first, which I don’t like, but one other person came in later. Yay!

Tomorrow is my last day. This adventure has been amazing, but I’m ready for it to end.