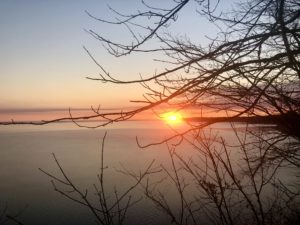 The Northern Neck is a done deed! The one nice thing about the PHT being a braided network of trails is that you can cross off these little sections one at a time. The first section I tackled was Virginia’s Northern Neck, and today I crossed it off the list.

Colleen drove me to the spot where she got me yesterday, about 3 miles (4.8 km) east of Montross. I had to hike into the town on a main highway, but it wasn’t too bad. I’d spotted a cute coffee shop yesterday, and ducked in for a breve latte, my (caloric) treat that I save for thru-hikes.

Clutching the breve, I headed back out, keeping my eyes peeled for the turnoff I knew was coming before I reached the city limits. Well, I got to the end of town and hadn’t seen my turnoff. I checked my map and saw it was actually right before that coffee shop. I was now .75 miles (1.2 km) past it, so that meant an extra 1.5 miles (2.4 km) on a day that was already going to be unpleasantly long. Nooo!

Luckily, the first 14 miles (22.5 km) were beautiful and on quiet country roads. I passed Stratford Hall, Gen. Lee’s birthplace, which was closed today because of the coronavirus. Not that I would have had time to stop in. I began jogging all of the frequent downhills to make up time, and because it felt good to use different muscles. Maybe the day wouldn’t be so bad after all.

The next 12 miles (19.3 km) along the Northern Neck were unpleasant, to say the least. These miles are mostly “planned” PHT road routes. Right now you have to walk on the side of busy highways, but presumably in the future there will be special bike/hike lanes or off-road trail. I’m not sure.

Disclosure: This entry may contain affiliate links (among regular links) to products I own and like, or which I think you might like. This means that, at no extra cost to you, I will earn a commission if you click through and make a purchase.

Anyway, I’d just purchased Air Pod Pros before leaving home, but had left them in my car. They have noise cancellation features and 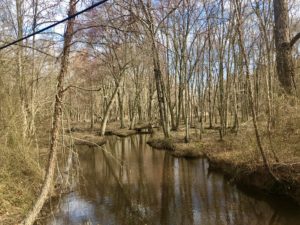 would have been perfect to block out the roar of the semis and cars going by. But I had to listen to the noise and just focus on putting one foot in front of the other. My hat blew off about five times when semis flew by.

Finally, I reached Colonial Beach. On the only trail map available, it shows the path ending at a major intersection. But it also says the map presents a rough representation of the trail. When I reached this intersection, exhausted, I saw a trail marker pointing me left. So I continued on.

Colleen’s husband and son (Tony and Sam) had joined her during the day. They all drove to pick me up in Colonial Beach. I had them do a reconnaissance mission up the road to see where the trail markers led, but there were no more markers. So after hiking another mile or so (2 km), I stopped.

Trail materials say the PHT’s Northern Neck bike trail was signed about five years ago. There are signs out there, but they need improvement. There is a sign near (but not at) the southern terminus in Smith Point, for example, but not in Reedville, the other terminus. Generally, there are signs only when you need to turn off the road you’re on. But sometimes there are none.

Other times, you’ll find a sign for southbound bikers/hikers at an intersection, but not for NOBOs. And, of course, at the northern terminus in Colonial Beach, there is just that final sign pointing you left without any indication of where to stop.

Oh, well. Trails take time to develop and get things right. And the PHT is a newer trail that is not widely known or used yet. I’ve been asked by a National Park Service ranger in charge of the trail to give feedback, and I will. 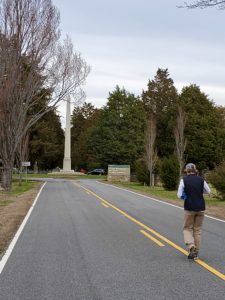 The Brushes drove us back to the spur trail leading to George Washington’s birthplace. By this time it was cold and windy, and I was so tired. But Colleen walked with me those last 2 miles (3.2 km), and with that, I finished the Northern Neck!

I wish I had had time to explore Westmoreland State Park. It looks so beautiful, but I don’t have unlimited time to complete this hike. And so tomorrow I move on to the Southern Maryland section.