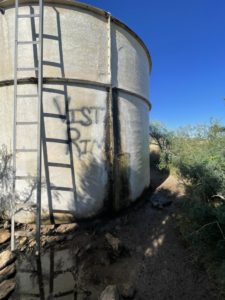 I don’t want to seem like a whiner, but rather a realist, so other hikers know what to really expect. So many people downplay the hardship of various hikes. The CDT in mid-September through October is supposed to be glorious. At least before our weather got so wonky.

After having hiked nearly 10,000 miles (16,093 km), I have never hiked in conditions as brutal as these. The days are well into the 90s F (+32 C), with little to no water sources. Had I known what the weather would be liked, I’d have packed snacks like dried fruit, nuts and jelly beans – things that don’t turn melty and hot and disgusting in the heat. I’d also have considered packing salt tablets. But, alas, the forecast I saw wasn’t so dire. I was unprepared.

Which brings me to today. Once again, I was optimistic. I had plenty of water from the tire near my campsite, so that was reassuring. Unfortunately, the rain last night drenched my tent, and it didn’t dry out at all while I ate breakfast. So I had to pack up, and carry, a wet tent, which is heavy.

The other bad thing about a wet tent, I discovered, is that it doesn’t stay put on the outside of your backpack. Or at least not mine. I bet I stopped five times to re-secure it.

But back to the hike. The morning started off well. I came upon 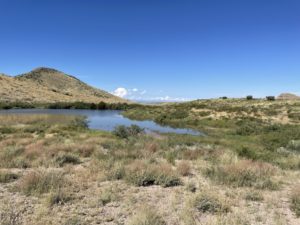 Vista Tank, where I’d hoped to camp last night. Vista Tank had some holes on the side that were gushing water, so I could easily fill my Sawyer Squeeze without having to climb up the ladder on the side of the tank.

At one point, a rattler, or some hissing snake, scared the heck out of me. But while the hiking wasn’t so bad, I began to get concerned. I realized that during the last two days, I hadn’t eaten much. All of my bars were melty and gross. I couldn’t even stomach more than a few forkfuls of my (expensive) backpacker meals at night. This wasn’t good. I normally have HUGE hiker hunger.

I hate giving up on my goals. I have the fortitude to stick out any bad conditions. But I knew that wasn’t smart now. I needed to 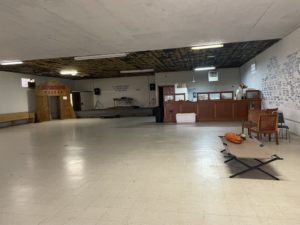 get off this trail today. So I messaged Jeffery to see if someone could meet me at cache box 4 and take me to Hachita, with the showers and camping Jimbo mentioned yesterday. Cal was available.

By the time I got to the cache box – which involved crawling on my stomach underneath a barbed wire fence with no gate – I was completely depleted. Cal whisked me to Hachita, where I bought some food and drink at the little grocery, then got the keys to the community center for a $10 donation.

This place was incredible. On the down side, it was hot (just some fans for air circulation) and full of crickets and flies. But on the positive side, it consisted of a huge, open room with tables to spread out and organize my stuff, Army cots to sleep on, and a full kitchen, where I was told I could eat anything I wanted.

Riva, a cyclist, soon joined me. We gleefully explored the kitchen, where we found an unopened bag of chips and a new jar of salsa. Bananas and blueberries. Oatmeal, hot chocolate and coffee. Frozen French fries, cheese and sausage. Fresh yogurt. And so much more.

After we both got organized, we went back to the Hachita store to buy some of their storied burritos and tamales. They don’t sell beer, but Michael (who I met the other night) said he had a cooler full in the back of his truck. He’d sell you as many Coors Light beers as you wanted for whatever you thought they were worth.

That night, Riva and I feasted on chips and salsa, tamales and beer. When the sun went down and my devices lit up the room, the crickets began jumping on me, which was gross. But once I turned off my devices, they left me alone.

I really needed this shorter day, and a “shower” in the kitchen sink (where I even washed my hair!), and time to clean my filthy, muddy tent while I slept on an Army cot.

My most valuable piece of gear today: my Bogi microfiber towel. It dried me off (including my hair) very easily, then dried quickly. I used it as a little blanket over my legs at night, as I set one fan blowing over me to keep the bugs away, which was chilly on my legs. They also come in great colors!