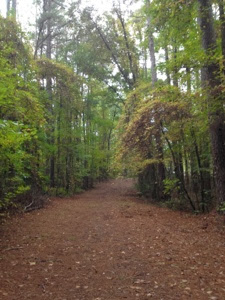 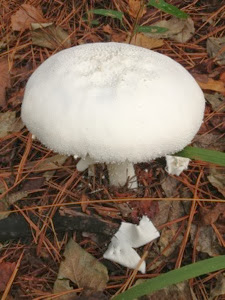 Back in Clinton, before we reached Kosciusko, a woman learned we were biking the Trace south to north. When she heard, she kept exclaiming, “You’re going uphill all the way!” I didn’t think too much about it, for none of the materials talks about a huge elevation change. Well, this morning we were eating breakfast with a local woman who said, “Now the hills will be starting! Well, really once you’re past Tupelo.” Hmm …

So far, the Trace has been hilly, it’s true. But all of the hills have been really long (a half-mile [.8 km] to a mile [1.6 km]) with a very gradual incline. It’s interesting, because you don’t really notice the hills visually when you’re pedaling up. Instead, you just start feeling tired, and like you have dead legs. Then, as you near the top and really have to slow down, you realize, DUH, I just pedaled up a hill. Going downhill, it’s easy to tell. Because with gravity, you really pick up speed. Today, after leaving Kosciusko, we had more of these same hills. But we also had a handful that you could visually see. And they were reasonably tough.

So the highlights north of Kosciusko started with French Camp. That’s the name of a city. It got that name because some French guy started an inn, I believe, for people on the Trace years ago. So once the inn opened, people began calling the area around it the French Camp, and the name stuck for the city. Today, there’s a Christian boarding school in French Camp. They support themselves partly by running a cafe and B&B along the trace. They also have a small museum on the grounds, along with lots of artifacts from the French Camp era. It’s an interesting place.

The next highlight was Jeff Busby, a park that has a trail winding up to Mississippi’s second-highest point, where there’s a scenic overlook. Ed and I had lunch here, then hiked up the path and enjoyed the view. It was another cloudy day, so we couldn’t see all that much. Still, it was pretty.

Next up was another short section of the Old Trace. I always love walking on those. Hopefully I got some good photos. An elderly couple stopped there to read the historical marker, and were so impressed that we were biking the whole Trace. It’s funny how many people think this is such an epic project. Yes, 444 miles (715 km) is a lot to bike, but we’re taking 7.5 days to do it. I’m sure “real” cyclists with cleats and good bikes and all that could easily do the Trace in 4-5 days. Oh well, I’ll take the compliment! (Although another person lauding our effort added that we weren’t “that young.”)

I couldn’t find lodging right on the Trace in this section, so we’d secured a cottage B&B in Eupora, a town seven miles (11.3 km) away. Ed was getting a bit saddle sore, and nervous about tomorrow’s 67-mile (108 km) day. So instead of taking the longer, but safer, route, he said we should bike on Hwy. 82, the direct route. Well, that turned out to be a four-lane highway with a gravel shoulder that was too bumpy to bike on.

Luckily, the traffic was light, so we biked in the right-hand lane as far over as we could. All of the motorists who passed simply drove in the left-hand lane. Still, it was unnerving to be biking on a highway, so we pedaled as quickly as we could. I think we were averaging something like 18 mph (29 kph), just trying to get off of it as quickly as possible. Ed says we should take the longer, safer route back tomorrow, even though it will mean re-biking 2.5 miles (4 km) of the Trace.

Dogwood Cottage, where we’re staying, is a beautifully decorated inn. The friendly owner, Carol, even offered us the use of her washing machine, which was much appreciated, as our cycling duds are in need of a good washing. But Eupora is in a dry county, so no celebratory beer or glass of wine tonight. For us Wisconsinites, a dry county is hard to imagine! 😉