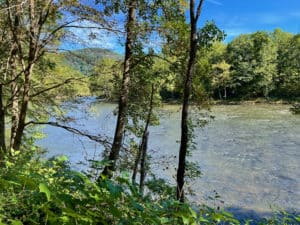 My hike to the Ohiopyle shelter along the Laurel Highlands Trail was certainly a memorable one. As was last night. So, I was camping at the Youghiogheny Outflow Campground along the Youghiogheny River. It was a nice spot and it was pleasantly cool at night. I tucked in at sunset – 8-ish – and listened to people party at their campsites until quiet time at 10 p.m. And then I drifted off to sleep.

I thought I’d sleep soundly, after the numerous trains that blared past my campsite the previous night. But I was rudely awakened just after midnight by what sounded like a tornado siren. After a few disoriented minutes, I recalled there were warnings signs along the river about a dam that regularly gets released. This had to be a warning that the dam was being opened upstream. (Or is it downstream if the river flows north?!)

Interestingly, the siren went off again around 2 or 3 a.m. (And then a train blew past.) I’d be curious to know what factors go into determining when dams are opened. Josh told me that fishermen have to wait until the water rushes by before they can fish again, and local whitewater kayakers carefully time their trips to coincide with dam releases so they can enjoy the rapids they create.

Making My Way to the Laurel Highlands

I had roughly 10 miles (16.1 km) to the town of Ohiopyle along the GAP. The morning dawned foggy and cold, so I put on my rain pants and struck out. Almost immediately, three otters crossed my path. Cool! And within just a 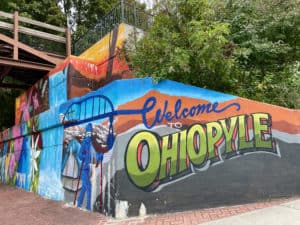 mile/kilometer or two, I was officially in Ohiopyle State Park. Nothing looked too different, though.

There were no cyclists the first few hours, so once again I wondered if any would be on the trail today. But once it got to be a civilized time (after 10 a.m.), they came out in droves. Most were locals or day-trippers, not long-distance cyclists. Soon the sun broke through and I enjoyed nice river views.

The End of the GAP

I reached Ohiopyle around noon. It was bustling with tourists, who I assume mostly come to hike, bike or paddle. There is a tiny downtown with a clutch of stores and restaurants. I got some cheese sticks for my hiking and some soft-serve ice cream, but the latter was disappointing – kind of freezer-burned. 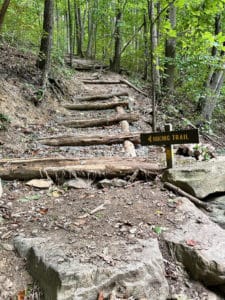 Next I crossed the beautiful Youghiogeny on a pretty bridge, then hit the Wilderness Voyageurs store. Maura had mailed a pair of my Prana hiking pants to them, so I picked up those along with one freeze-dried dinner and more stove fuel. Then it was time for the Laurel Highlands Trail and the beginning of the end.

I knew this singletrack hiking trail featured 1,200 feet (365.8 m) of climbing in the first few miles. But would it be straight uphill or feature gentle switchbacks? I feared the former, as people warned me the first few miles were miserable. After that, though, they told me the trail unspooled along the ridge and was “super easy.”

Sure enough, the trail began with a steep incline – one so steep that I had to grab trees and other items to get up. But then it flattened out. However, it was so rocky you had to navigate the path very slowly.

The flatness soon ended, and the trail then began a series of steep ups and downs. According to maps I had, it looked like I’d go up one big hill, down a big hill, then partway up another hill to get to my campsite. Instead, I kept going up and down steep hills the entire time.

One map I had said the campsite where I’d reserved an old Appalachian Trail shelter, now refurbished, was 5 miles (8.1 km) in. Another sign said 6.3 miles 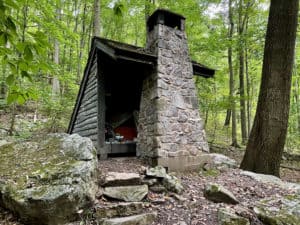 I was the only one here and found my shelter, #1. As I began setting up camp, various people trickled in. A lot were SOBO hikers, or southbound folks, so they were able to give me good intel. Like water can be an issue on the trail, and you still have to filter water from the campsite pumps.

The last I’d seen, the weather was supposed to be sunny and cool the rest of my hike. I’d booked shelters at all of these campsites, though, just in case of rain. Well, as I’m writing this journal entry, it’s starting to rain! I’m just shocked. I had some sweaty clothes hanging out to dry that are now even wetter. And had I known rain was coming, I would have gotten water from the pump and done a few other housekeeping tasks. Oh well, at least my tent and everything else is all dry in the shelter!