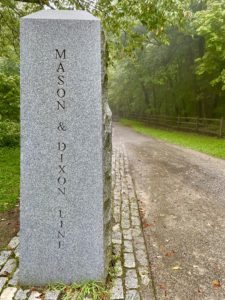 My trek to Meyersdale today could be considered a loss. But I’m choosing to view it as a win. The forecast called for rain starting last night around 4 or 5 p.m., and not ending until tomorrow morning. Storms were also predicted for the early afternoon. None of this sounded appealing. I considered taking a zero day, but I don’t have enough time.

Luckily, I’d planned to have Bill, the Uber driver, shuttle my bags ahead to give myself (and my back) another break. Without a heavy pack, I can easily hike more than 3 mph (4.8 kph). Still, I’d be out in the rain for 5-6 hours. Ugh. I waited until the rain slowed, then hit the trail around 9 a.m.

The first hour or so weren’t too bad. It was drizzling, but nothing too bad. I though I might be the only one out here today, but at least three dozen cyclists pedaled past during the day.

Several hours in, it began to rain a lot harder. This part was 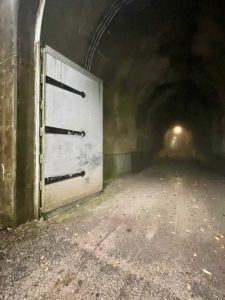 definitely not fun. While there are sporadic places to pull off the trail and sit in a shelter and use the restroom, they are a few hours apart for a hiker. Still, whenever I spotted one I stopped there to eat and drink something and get out of the elements. I was using my small backpack with a rain poncho over it, so there was no way to easily get at my water bottle or snacks.

Thankfully, after maybe 30 minutes of a hard rain, the rest of the day alternated between light and heavy drizzle. It never stormed. Definitely a win!

So the disappointing part about today was that I passed so many cool spots that I would have loved to have enjoyed on a sunny day. I crossed the Mason-Dixon Line, for one thing. This famous 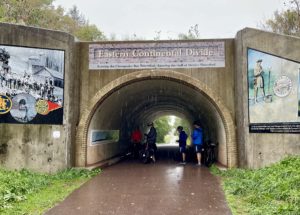 line was originally the result of a boundary dispute between two British colonial families, the Calverts and Penns. (Its name comes from an astronomer [Mason] and an surveyor [Dixon] who drew that line that resolved the feud.) Today it’s considered a cultural barrier separating the North from the South.

I hiked through two tunnels, including the kilometer-long Big Savage Tunnel. And I crossed the Eastern Continental Divide, which is the spot separating the Chesapeake Watershed from the Gulf of Mexico Watershed. There is supposedly an incredible view from this high point, nearly 3,000 feet (914.4 m) above sea level. But, alas, all I saw was a sea of clouds.

Hunkering Down for the Night

Tonight I’ve got a room in the Morguen Toole Company Hotel in downtown Meyersdale. It’s a funky, restored old building.