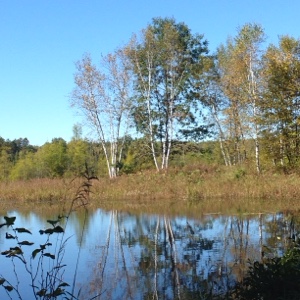 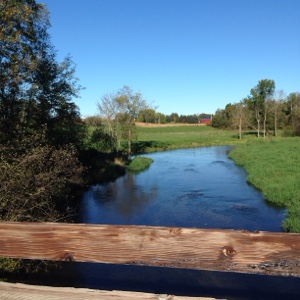 Today was the first beautiful hiking day, meaning sunny and cool (highs in the 50s). I started the day with the cute-but-short Blueberry segment, which I’d missed in 2013 (there wasn’t good signage going west-east back then). It’s just a sliver of trees in between Highway 8 and a gravel road, but it’s fun to walk.

Next up was the Tuscobia rail-trail. I thought it was much prettier than in 2013, when I thought it was pretty ordinary. Then I realized all of these scenic “lakes” on the sides of the trail were likely just standing water; this part of the state apparently got a ton of rain all summer, plus 7 inches last week. (Down in the Madison area, we had less rain than normal.)

Of course I had to stop in at the Haugen General Store and sign the guest register. Lots of hikers and cyclists stop through. I bought an ice cream sandwich, egg salad sandwich, some duct tape (to tape plastic bags to my shoes to keep out the water) and ibuprofen; the owner said a lot of us are looking for ibuprofen! I signed the register right below Rachel’s name, the other thru-hiker I met a few days earlier.

The next segment was Bear Lake. I had a terrible experience in Bear Lake in 2013, when I was terribly lost and all of the blazes suddenly disappeared. Then, last summer, a woman got lost and spent the night in the woods before calling 911 in the morning. Bear Lake has been totally reblazed, and there’s no way you can get lost now. Yay! It’s very pretty, too, passing several lakes. About eight folks were out hiking there when I went by.

The last segment for the day was Grassy Lake. A local trail person warned me the first half had standing water. No problem; there was lots of that in the Blue Hills. Well, there was a lot of standing water. In one area, it was calf-high and akin to wading a creek. Then I came across either a new beaver dam or a broken one. It necessitated walking through waist-deep water to cross (luckily just a few steps). But wouldn’t you know it — it was late in the day and cool, so I was quite cold. Why couldn’t this have happened on any of the gazillion hot days I’ve hiked this trek?!

Luckily, I realized I had rain pants in my pack. So I stripped off my wet shorts and changed. Now, I’m in the wilderness and hadn’t seen or heard anyone in hours. Just as I pulled my pants on, a truck drove by on a logging road! I dodged a bullet. I wouldn’t want anyone to think that I was the nude hiker!

The day ended with Trail Angel Tim McGraith driving me back to my car. Thanks, Tim!