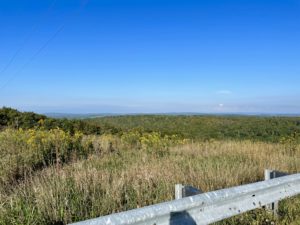 Today’s trek to the Meadow Mountain Overlook was actually on the itinerary for tomorrow. Here’s what happened today, which will affect my entire experience of the Easter Continental Divide Loop (ECDL) of the Potomac Heritage Trail.

I struck out from the Trail Inn just before 8 a.m. It was a 7-mile (11.3 km) road walk to the start of the Big Savage Mountain Trail, part of the ECDL. The hike was SO difficult! The first few miles were all a steep uphill, as were many other stretches. I guess it’s not surprising, as I’m on/around the Eastern Continental Divide! Thankfully, the temperatures were cooler and the humidity was tolerable.

When I reached the end of the road walk, I sent a quick email to Josh Spiker, the head of a group called Garrett Trails, named after Garrett County. Josh was going to do some shuttles for me in the coming days, and I wanted to touch base while I had cell service. Good thing I did!

Josh said he had misread my planned itinerary and strongly warned me from hiking the Big Savage Mountain Trail. Apparently it hasn’t been maintained in years and is filled with 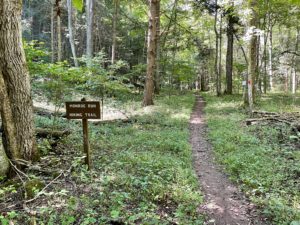 downed trees and thick scrub and thorns up to your chest. He didn’t think it was even possible to hike the trail at this time of year. Luckily, Josh was able to pick me up an hour later and help me come up with an alternate plan.

Turns out the ECDL of the PHT is partially in place and partially just an idea at this point. No one’s really been thru-hiking the PHT – except me! – so it hasn’t been an issue. He said it would be best to hike west of Big Savage Mountain, which is actually where the ECD is. So essentially the next 2.5 days of my plan were good.

He also said many of the road walks I’d planned were on dangerous hilly, winding roads with no shoulders. So he insisted on driving me to the start of a place called Monroe Run, a trail I’d planned to reach tomorrow afternoon.

Making My Way to Meadow Mountain

By the time Josh picked me up, explained things, gave me a tour 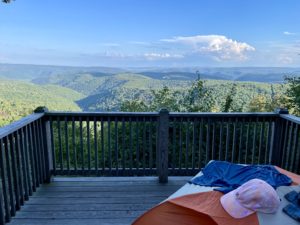 of the area and dropped me off, it was 1:30 p.m. Monroe Run is a roughly 6-mile (9.7 km) trail that follows a small creek, crossing it 19 times. The path was flat, although rocky and rooty. It was very easy to cross the rushing creek on the plethora of rocks in the stream bed.

When I was at trail crossing 18, by my count, I filled up my water bottles with the clear, cold water. After that, the trail took a nasty, steep climb up and out of the forest, plopping me out on the road. From there it was another mile or two, all up steep hills, to the Meadow Mountain Overlook.

I’m camping on the overlook tonight, which is essentially a 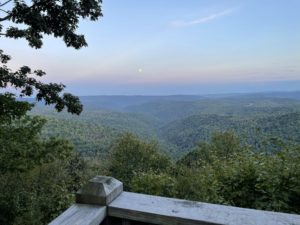 wooden deck only five steps up from the ground. It’s a perfect size for my tent, and the view is incredible. I’d worried that maybe it would be a popular spot, as it’s a Saturday night. But no one’s been here, so I was able to wash up and eat in peace.

I spoke too soon! Just as I wrote that, a man hiked up. He was with the DNR, my age, and just walking for exercise. We had a nice chat. Night!