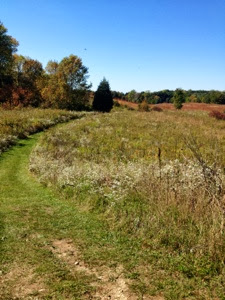 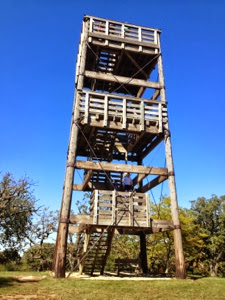 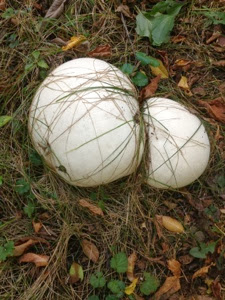 Today my goal was to complete the Merton segment south of Holy Hill. I began on the Scuppernong segment (love that name). I don’t believe horses are allowed on it, but there were horse apples everywhere. The bulk of the trail was a bit tough for running – lots of steep hills and rocks – but the last part was quite nice.

Waterville was a short jog through farm fields, prairie and woods – again, very pleasant. I could do a lot of running here. There were lots of those nasty spider web things, though. Ugh. I especially hate when they wrap across my face.

I was quite surprised at the Lapham Peak segment. I’ve skied there many times, plus run some trail races and adventure races there. I thought I knew all of the trails. WRONG. Virtually all of the IAT in Lapham Peak was along trails I’d never been on. Most were quite rocky, although the final segment across County Highway C was in a gorgeous prairie, with undulating hills and generally great footing. More prime running here.

Honing in on Merton

The route through Delafield was mostly on a bike path, although it was quite hilly. Hartland was a fun hike/run. First, the trail took you alongside a golf course, then tucked you back into some woods near the course. Then you walked through a subdivision filled with gynormous homes, then onto a tiny trail in between some of the mansions. You popped out onto some recreational paths that led you into a marsh, then through some pretty parks. It was just so nice. Well, except for the section near the marsh.

There was a long boardwalk there. I’ve been very careful with boardwalks, walking across all of them unless they were brand new. That’s because the boardwalks on the IAT are generally older, and often have warped/uneven boards, boards that shift when you walk on them, etc. I’ve been very careful so I didn’t have any mishaps. So there I was, walking along a boardwalk, when I suddenly slipped on a wet spot (or maybe moss) and slammed my shin into the edge. I figured I’d have a bruise from that, since I bruise easily, but tonight I discovered a HUGE goose egg on my shin (plus a big bruise). Figures! This trail wants to maim me.

The Merton segment was interesting. There’s a trail there, and right next to it they’re starting to create a rail-trail, which I believe is called the Bugline Trail. So you can walk the original trail or hike on the cleared path for the rail-trail. I did the latter.