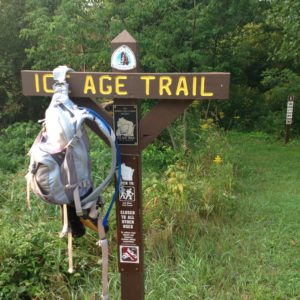 Today’s goal was hiking from Tisch Mills to Manitowoc. I started off the day getting shuttled by Bob Fay, a section-hiker I met on the trail in 2013. He’s from Two Rivers and will be finishing the IAT later this year. Dolly McNulty also helped today, first getting my bags from Bob, and then taking me to a friend’s place at the end of the day. You can’t beat Trail Angels!

Both Bob and Dolly warned me that the 17th Street bridge was still out in Two Rivers, so I’d have to take a 10-block detour. I was bummed, since I’m hiking a lot of miles every day.

Despite that, the day was great. The new East River segment is a gem. Kudos to all who worked on it! Point Beach, one of my favorites from 2013, was as nice as I remembered. This year, Dolly said, Lake Michigan’s water levels are at a 30-year high. So instead of a nice walk along the beach, I waded about 1.5 miles (2.4 km) in the water and had to walk through scrub another .5 miles (.8 km) when the water was simply too deep. The scrub wasn’t that great, but I actually loved wading. I had my Keen sandals with me, and the cold water felt so good on my aching feet! 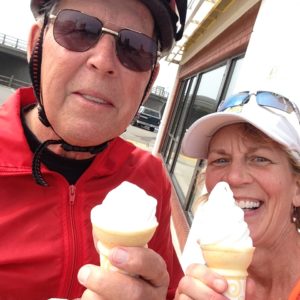 Someone loves me. The minute I was approaching the 17th Street bridge, a crew was taking down the barriers and opening it up! I think I was actually the first pedestrian to cross it. Two kids on bikes went over before me. I was so excited to avoid that detour!

I never seem to pass restaurants or stores when I’m hungry, but today I got a 49-cent cone at McDonald’s in Two Rivers – score once more!

Just as I was heading down Clay Pit Road, a woman in a scooter called out to me to do an extra mile for her. We stopped to chat. She has MS and is blind in one eye, yet was so cheerful. I promised her I’d hike one extra mile today and that from now on, I will dedicate my last mile of the day to her – Karen Zander.