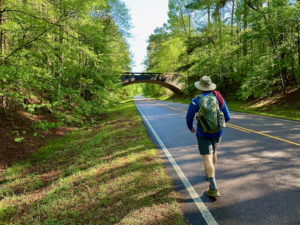 Today’s goal was Rocky Springs, the second of five sections of the Natchez Trace National Scenic Trail. It lay at the very end of the day. I was excited. Little did I know what this day would bring.

The morning went well. It was sunny and warm out, but not too humid, and with a nice breeze. The only negative was that there seemed to be an awful lot of non-tourist cars on the Trace, many zooming by at far above the speed limit. The parkway is supposed to be mainly for tourists driving at a leisurely pace, not for those using it as a highway. But this gets abused a lot.

Anyway, the first interpretive site was a small section of the Old Trace. We didn’t hike it because we’ve already hiked several miles of Old Trace on the Potkopinu section, and those miles were way more impressive than this little chunk.

The interpretive site featured Grindstone Ford and Mangum Mound. Grindstone Ford was a little odd in that it consisted of a small, overgrown path leading to an overgrown section of the Old Trace, plus some crumbling tombstones from the mid-1800s (past the main Trace era). The interpretive sign did not explain this. Hmmm. Mangum Mound is another Native American burial mound, but not as impressive as Emerald Mound. 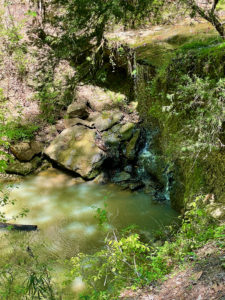 After lunch we saw the Owens Creek waterfall, once a roaring spot now down to a trickle. This is also supposedly the southernmost spot of the Rocky Springs section of the NTNST, but we didn’t see where the trail began. Not a good sign.

Our final shuttle of the day left Ed’s car at Owens Creek, while we drove mine to the northern end of the Rocky Springs section. I thought it was 6.6 miles long (10.6 km), so we figured we’d be finished for the day around 5-6 p.m. How wrong we were!

We headed down the trail and immediately were flummoxed when the path split and there was no sign. We headed into the woods instead of taking a path across open grasses that paralleled the parkway. Wrong! After seeing a “private property” sign, we backtracked onto the grassy path.

To make a long story short, we lost the route again and ended up hiking on the parkway. But then we spotted it again and ducked into the woods. Here, the path was marked by pink ribbons. Because the ground was hummocky and filled with downed trees and branches, we had to hike ribbon-to-ribbon. We made it almost all the way to a road crossing, then lost the path again. 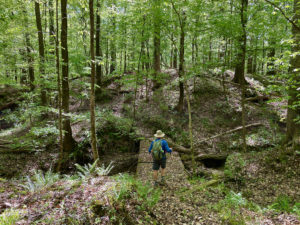 Will We Ever Reach Rocky Springs?

At Ross Road, the trail crosses the parkway and ducks into the woods on the west side of the parkway before unspooling into the Rocky Springs historic site and campground. Unfortunately, there were no pink ribbons here. In some places it was very easy to see the trail without any markings, but in many other spots it was impossible. Since the route roughly parallels the parkway, and the vegetation was sparse, we decided to hike on the trail when we found it, and otherwise just keep hiking through the woods near the parkway.

At some point, however, even this became impossible. I also discovered an error I’d made. While most of the sections of the NTNST list the mileage, the Rocky Springs blurb just mentions it runs between 6.6 miles (10.6 km) of the parkway. So I had it in my head that the section was 6.6 miles (10.6 km) long. It’s longer.

My next plan to complete the day’s itinerary was to hike the several miles of the trail that run through Rocky Springs itself. That section had to be well marked, right? Nope. Even here it’s poorly blazed (or not at all) and filled with downed trees. I tried over and over again to find the trail (or stay on it), but eventually gave up around 7:30 p.m. I’m not a quitter, and there are only 62 miles (99.8 km) of trail along this 444-mile (714.6-km) parkway. So it was especially frustrating to have so many issues finding the trail.

But, in the end, I had to look at it logically. I had to miss hiking through Saguaro National Park on the Arizona Trail due to a blizzard that dumped a few feet of snow on the park/mountaintop. Many hikers have had to hike around wildfires on the Pacific Crest Trail. Sometimes you get lost and inadvertently skip pieces of any given trail. Crap happens.

So I’m moving onward, hoping the other three sections are marked and at least somewhat easy to follow.